Jamaica's history - always something new to find out!
I first saw references to Zithri Atkinson more than thirty years ago while I was working on my thesis on Robert Love, the doctor/journalist/politician in Jamaica from 1890 to 1914. I always hoped that I would see more about him somewhere. Now I am trying to bring together what I can find, so that this early modern Jamaican artist has some place, however small, in the island's story.
Using references from the Jamaica Advocate, the Telegraph and the Gleaner, I gave this account of Zithri Atkinson's presence at gatherings of Love's 'People's Convention':
It appears that the objective of raising a memorial to the

philanthropists had not been achieved, but it was recorded that

‘enlarged crayon portraits’ of the three men and of Wendell Phillips,

the American abolitionist, were placed on the walls of the Spanish Town

Hall at the meeting of the People’s Convention in August 1899. These

portraits were done from photographs by a young black Jamaican called

in Kingston at the time. This is a reflection of Love’s original

intention of having sculptures done by an artist of African descent.

Unfortunately no mention is made of the final location of these

portraits. However the underlying objective of creating an institution

largely controlled by black men had undoubtedly been achieved and

prepared the way for other similar bodies in the future.
Love reminded his audience that they did owe a debt, of gratitude

the walls of the Hall. Here Love paused to introduce to the audience

the young black self-taught artist, Zithri Atkinson, who had done the

portraits from photographs and presented them to the Convention.
In 1903 enlarged crayon portraits of Clarkson, Wilberforce, Phillips,

Toussaint, John Brown and Knibb were placed over the platform at

the People's Convention.  It was not stated that they were by Zithri

Atkinson, but he was present and took part in the proceedings.

from 'ROBERT LOVE AND JAMAICAN POLITICS', Chapter X
On the birth record of his daughter born in Kingston in 1902, as on the other two birth records I have found, Zithri Atkinson gives his 'rank or profession' as 'Artist'. He had been establishing a reputation in his field, at least from 1897.

Jamaica Post
July 18, 1899
NATIVE TALENT
Jamaican makes Crayon Enlargements
from Photographs and Drawings.
Jithri J. Atkinson, a young Jamaican, residing at No. 47 Maiden Lane, Kingston, called at the DAILY TELEGRAPH office yesterday and showed a really excellent specimen of crayon enlargement, executed by himself from a cabinet photograph.  Mr. Atkinson is self-taught; and he has turned out many beautiful pieces of work, in which the display of artistic skill is highly creditable, and for which he has obtained fair remuneration in appreciation of his skill.  The picture which was shown yesterday represented an Italian mother with a babe in her arms; and seemed indeed a difficult job.  There were also shown some splendid collections of wood engraving, sketches, stamps, monograms, etc., which had been executed by the unaided efforts of Mr. Atkinson; and these also do him high credit.  This young man is the same who gained the prize at the Eisteddfod competitions at the Institute some time ago for freehand drawing and drawing from light and shade.
Mr. Atkinson also does good work in the way of window decorations; and he can be recommended to those who need the services of a skillful, intelligent draughtsman, engraver, decorator or picture-painter.
Zithri Atkinson continued his artistic profession in Kingston at least until 1904:
He may, like many others, have left the city after the earthquake of January 1907, which destroyed most of the commercial district. His daughter and son, born in 1908 and 1913 respectively, were both born in Westmoreland, which seems to have been his base for the future.

There are few references to Zithri Atkinson, the artist, after this, though a comment in 1930, from Sav-la-Mar, shows that he had continued his creation of portraits from photographs:

The latest references I have found to Zithri Atkinson are in 1938 and '39. By that time he might have been about sixty, and may have died sometime in the following years; I have found no mention of his death.
Daily Gleaner, April 28, 1938
JAMAICA ON DISPLAY - THE ART EXHIBITION

The first indication I have found of Zithri Atkinson, photographer, is in 1927:
Daily Gleaner, April 30, 1927 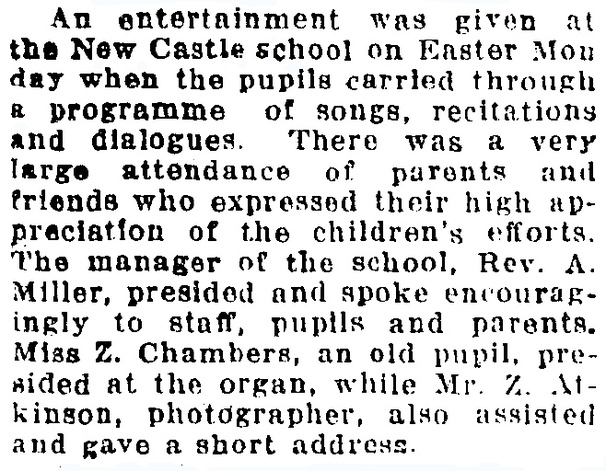 Once Zithri Atkinson had moved, or perhaps, moved back, to Westmoreland, he probably realised that to make a living, he had to turn to being a photographer, as more practical than being an artist.

There are few references to Zithri Atkinson as a photographer, but there are enough to indicate that he made a success of that career.

Some of Zithri Atkinson's photographs appeared in the press.

The three shown below are those that I have found which can best be reproduced.