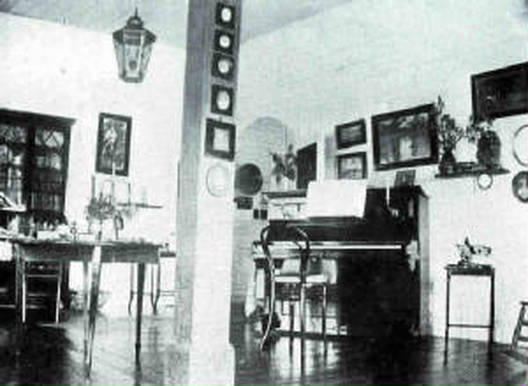 a room in Kingston, 1907.
Kingston
Monday, January 14, 1907.
I was seated at a little table, every window and door of the room was wide open, the heat was oppressive.
Picture a cloudless sky, a temperature of 92 or 95 degrees Fahrenheit in the shade, relieved about mid-day by a cooling breeze that increased in power until about three o'clock, when it had attained the violence almost of a gale.
Doors were repeatedly banging, blinds on every window were for ever waving in the wind; at each violent gust they would snap like the crack of a whip. Lace curtains breaking loose from their lower fastenings were streaming continuously on the breeze; on the windward side they were often level with the ceiling itself.
The strong breeze began to lose force until, at about 3.30, it had faded into nothingness. For two minutes there was not a breath of wind, no doors banged, no blinds moved, curtains fell back to their places, not a sigh lifted a leaf on any bough. Nature had seemingly withdrawn for her afternoon siesta.

* * * * * * * * * * * * * * * * * * * * *
And then without murmur or warning, from the Blue Mountains beyond, or the still bluer heavens above, or the ground beneath our feet, there steals down upon us some intangible, impalpable monster, before whom the very earth reels and groans in violent agony and despair.
The heightening roar is of eternal memory - it was as though some vast herd of tigers, with warm blood already on their tongues, had been robbed of their prey.
A giant had seemingly seized upon the foundation of the structure in which I sat, and was shaking it with brutal pertinacity.
At the first movement of the earth the ceiling began to fall about my ears, covering me with small particles of mortar and dust - though not until long afterwards did I notice either.
Circular movement was there under my feet, but the upward movement was not less marked. We seemed to rise and fall as though embarked on the surging sea. Heavy walls swayed like an insecure stage setting, and at the same moment the earth rose and fell, bringing down masses of debris at every plunge and breaking floors like so much match-boarding.

[Much of the text in this section comes from eye-witness accounts of the earthquake by the English author Ralph Hall Caine, who arrived in Kingston on the RMS 'Port Kingston' on January 11 1907.]
In its first return to print in a small sheet on January 18th the Gleaner gave the first reports on the earthquake's impact on the rest of the island. 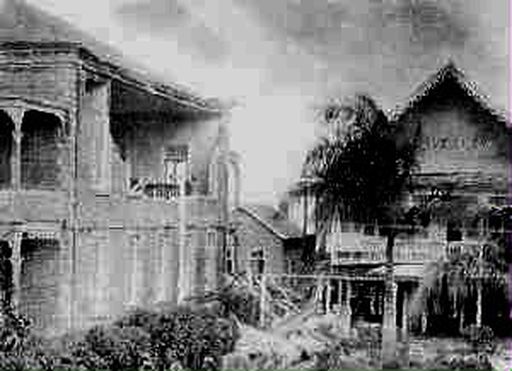 the damage to the Town Hall in Port Antonio 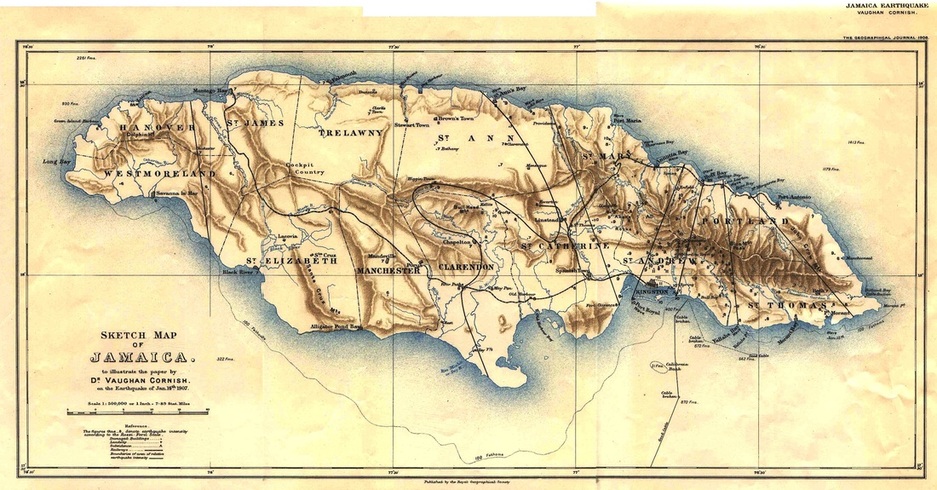