Nerine Barrett was born in Jamaica and studied piano with Ilona Kabos in London. A prize-winner at the Casella Competition (Naples) and the Young Concert Artists Auditions (New York), Barrett also won the Mozart Memorial Prize (London) and the first Michaels Award (New York). She gave her widely noted debut recitals at London's Wigmore Hall and New York's Carnegie Recital Hall in 1966/67. She has played with many prestigious orchestras including the London Symphony, the BBC Symphony, the Royal Philharmonic, the English Chamber Orchestra, the London Mozart Players, the New York Philharmonic, the Boston Symphony, the Chicago Symphony, the Munich Philharmonic and the Tonhalle Orchester of Zürich. Among the distinguished conductors she has performed under are Sir John Barbirolli, Gary Bertini, Pierre Boulez, Dennis Russell Dauies, Sir Colin Davis, Bernard Haitink, Eugen Jochum, Rudolf Kempe and James Levine. Nerine Barrett gained vital artistic impulses at the Marlboro Music Festiual in Vermont (USA), where she appeared several times and collaborated with such celebrated interpreters as Rudolf Serkin. Since 1989 she has been teaching at the Hochschule für Musik in Detmold, where she was appointed professor.

Critics' comments:
International Record Review: "... this is no vanity disc, pandering to the obsessions of some misguided group of nerds. Rosetti is well worth promoting. ... The music on this disc has been carefully assembled, two symphonies and two piano concertos from c1780, and is informatively introduced in the disc notes by the American authority on the composer, Sterling E. Murray. ... While symphonies by minor composers from the Classical period are well represented in the CD catalogue, concertos, especially piano concertos, are less frequently encountered. The two on this disc date from about five to six years before Mozart's masterworks. Of course they are not the equal of the Mozart works, but they do show where the greater composer was coming from. Particularly charming are the slow movements, not only in their lyricism but in their blending of piano and orchestral sonority. Nerine Barrett is a most persuasive advocat, with a subtly graded tone and a nice pointing of phrasing that, at the same time, avoids the mannered. ...
Fanfare: "... The sound of the TACET recording is of demonstration quality ... The notes, by Sterling E. Murray, president of the International Rosetti society, are very thorough. The performances are first-class. As expected, the Stuttgart Chamber Orchestra is well polished. Johannes Moesus is a young German conductor of considerable quality. He is also president of the International Rosetti society. I have not previously encountered pianist Nerine Barrett. A Jamaican, she has studied and performed widely according the notes. Certainly her performances here indicate we should be hearing more from her... Anyone interested in Rosetti is well advised to obtain both recordings." John Bauman 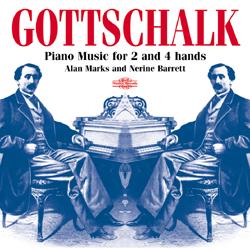 The music of Gottschalk is entertaining and can nonetheless be extremely rewarding as in this well selected collage of piano music for various hands combinations. Nimbus have sensibly split the discs with the two hands featuring on one and the four hands on the other. Of the latter (four hands), I was deeply enthused by the various picturesque impressions including a scintillating caprice  and brilliant and heady impressionism in 'La Jota Aragonesa'. Alan Marks and Nerrine Barrett are perfectly in unison in the latter piece and they make many grand rhetorical flushes out of the delightful 'Orfa' and 'La Gallina', both singular representations of Gottschalk's pianistic prowess.
[written a decade ago]