Bishop Courtenay ordained Taylor as a deacon on October 10, 1875,
and later ordained him to the priesthood on April 8, 1877. 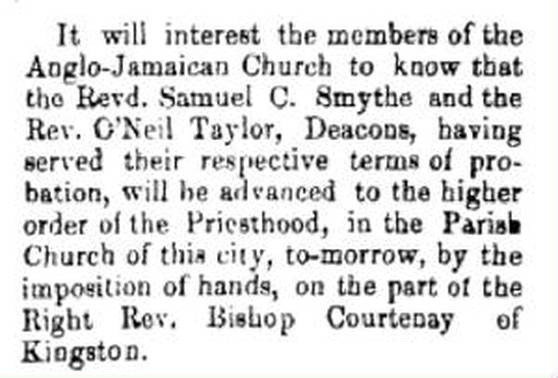 . . . but who was Ralph O'Neil Taylor?
In the 1870s the Bishop of Kingston, Reginald Courtenay, embarked on an interesting experiment – he brought a young Black man from Sierra Leone to the island, and surprisingly quickly ordained him, first as a deacon and then as a priest. The evidence presently at hand gives very little indication as to the Bishop’s motives, but the fairly speedy failure of the project may suggest what the object of the experiment was, and why it did not work out.

Ralph O’Neil Taylor was born in Freetown, Sierra Leone on August 14, 1849, and was baptized November 23, the same year, by the Rev Henry Rhodes, a CMS missionary. He was one of the large family of children of the Rev. John Christopher Taylor, an African clergyman of the Church of England. According to his father, Ralph was determined, from the age of six, to be a teacher or a minister. He was educated at the Freetown Grammar School, which had been established by the Church Missionary Society in 1845.[1] The Head Master while Ralph Taylor was there was the Rev James Quaker (1861-1882), the first Black Principal; Taylor did well at Mathematics, being awarded several prizes in that subject.[2]
Around 1870, rather than sending him to the Fourah Bay Institution, the CMS college in Freetown, the Rev Mr Taylor sent his son to England for two or three years to continue his education and ‘to study the manners and customs and improve in English diction and then become a missionary.’[3] He spent some time with Mr Thomas Matthews in Horsham; Matthews had thirty years experience of tutoring and was well known in the missionary community. He instructed Ralph Taylor in Classics, Mathematics, New Testament Greek and the Thirty-Nine Articles.[4] However, it was the wish of Ralph and his father that he should go to St Augustine’s College in Canterbury to further his training for eventual entry into the Anglican ministry. The Rev J C Taylor had visited St Augustine’s in 1860, when he was in England and staying with the Rev Dr John Stevenson, vicar of Patrixbourne, just outside Canterbury. He commented to the Warden, the Rev Henry Bailey, ‘I was not aware that foreigners were allow[ed] the privilege of being admitted there, otherwise I would have applied to you before I sent him over to your country.’[5] (For ‘foreigners’ one might, in the context, read ‘Blacks’.) So in 1871 both father and son were eager that Ralph should be accepted at the College.
There was a flurry of letters involving both Taylors, Mr Matthews, the Warden of St Augustine’s, the Rev Henry Bailey and the former bishop of Sierra Leone; Ralph Taylor was eager to move to Canterbury as early as possible. The former Bishop of Sierra Leone, Edward Hyndman Beckles, could say little of the Rev J C Taylor, who had been more in Nigeria than in Sierra Leone during his episcopacy. However what he did say was satisfactory, though he confirmed that the pay of a Native clergyman was small.[6]
. . . . (I need to do more research in these gaps,)

Three years later Ralph Taylor had apparently completed his course at St Augustine’s successfully, graduating, according to the later report in Jamaica, as ‘Licentiate of Arts’. The Warden communicated the news to the Rev J C Taylor in Freetown, who in response thanked him for his assistance to his son. He asked a further favour of Dr. Bailey – that he would recommend Ralph to the Bishop of Sierra Leone, who would be in England shortly, in the hope that he might be given a then vacant chaplaincy in Sierra Leone.[7] At this point things started to go wrong.
The new Bishop of Sierra Leone, Henry Cheetham, is described by Hollis Lynch in his book on Edward Wilmot Blyden in distinctly unflattering terms as dynamic, but ‘with a low opinion of African ability and with no patience for the “pretensions’ of the African pastors towards ecclesiastical independence.’[8] His letter, in response to one from Canon Bailey, the Warden of St Augustine's, was very discouraging to any thought of the younger Taylor being ordained in Sierra Leone. The Bishop was convinced that the young man ought to go as a missionary into interior regions in West Africa, and felt that he and the Warden should 'try to rally him and provoke him to some measure of missionary zeal'; what was wanted was
'. . . not empty inflated tall words in which the African delights, but someone to step out & do something: and not leave it entirely to the European to endure all the hazard & reap the rewards of hard service.'
He further commented:
'Of course he may be useful if he settle down in his own land: but it would be like an Englishman settling down in a family living. . . .
. . . but, in truth if you think he has it not in him: & that he is a poor weak mortal, only good and[sic] for home work, then let me know it at once, that we may know what we are about & agree to do the best we can for him.'
But what the Bishop suggested was that they 'try the effect of this little stimulant' on the young man.[9]
This letter from Cheetham appears to support entirely Lynch's description of him, and it is particularly unfair in the circumstances, since Ralph Taylor's father, the Rev John Christopher Taylor, had served in the mission field in Nigeria, with considerable distinction and at great personal cost. He established the CMS station at Onitsha, and did pioneer work in translating the Gospels into Ibo during much of the 1860s; three of his sons died during this period, and he himself came near to death in 1865.[10] It is understandable that the elder Taylor may have wished that his son might serve the Church at home in Sierra Leone. Other aspects of the situation in the Church there in the 1860s and '70s will be considered later in assessing the reasons for Ralph Taylor's problems in Jamaica, and may throw further light on Cheetham's attitude in this case.
Taylor then had a very satisfactory interview with Bishop Courtenay, who ‘explained everything . . . as regards Deacon Schoolmaster.’ He returned to St. Augustine’s to collect his books, and to express his gratitude to the Warden and the College. He was clearly uncertain when, or if, he would see his parents and friends in Sierra Leone again, but was buoyed up by the thought of serving in the Christian ministry, for which he had studied most of his young life. In February 1875 Taylor was therefore ready to leave for Kingston, as soon as he had received a letter from his parents. He expected to be ordained deacon there, soon after the Bishop got back in April.[11]
On November 1, 1875, a report of a missionary meeting in Port Antonio on October 26 appeared in the Jamaica Church Chronicle, and included this account of Taylor’s presence: