Jamaica's history - always something new to find out!
"Tom Brown was truly a great man"
his friend, the Rev. John W. Haywood, speaking at his funeral.
The biography of Thomas Brown in the account of his funeral speaks of him attending elementary school in Jamaica; he may have followed a similar course to that of his brother John whose biographical account (in the report of his funeral) says 'After leaving the elementary school he was for two and a half years at Beckford and Smith's in Spanish Town under Rev. Buckley.' That same good Jamaican education may have been what prepared him for his academic success in the United States, as it prepared John for his successful study of medicine.
According to his record in the 1910 Census, when Brown was living in Washington, D.C., he had gone up to the U.S.A. in 1898, but with apparently  no record of his entry through Ellis Island, his date and place of arrival are still uncertain.

Six years later Thomas I. Brown was registered at Lincoln University in Pennsylvania as a 'sub-freshman', one of 16 students from the West Indies attending the University that year.

Since Thomas was recorded in the 1910 census living in Washington, D.C., it is likely that the reference in the account of his funeral to him 'studying for a while at Howard University', may well be true; some further checking may give more detail on his time at Howard. 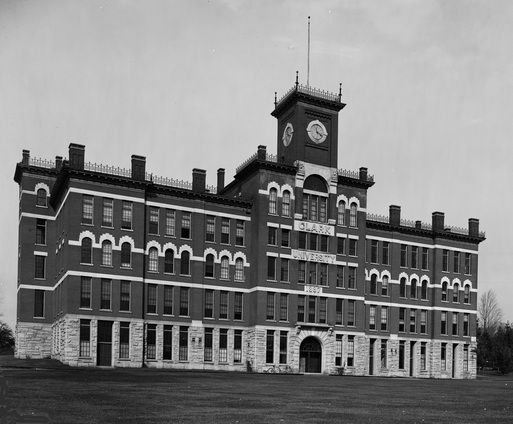 From official publications of Clark University a clear outline of Thomas Brown's career there can be obtained: 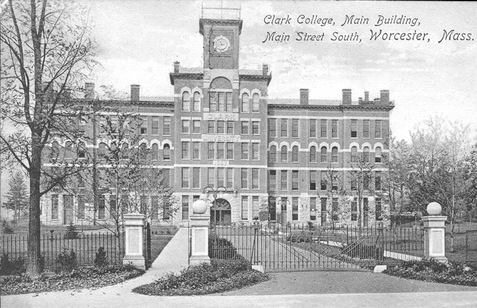 The Frederick News, [Maryland]
February 11, 1924
p1
COLLEGE STUDENT CONFERENCE ENDS
The Volunteer Student Conference embracing Maryland. Delaware and the District of Columbia. which convened at Hood College Friday evening with about 175 delegates, concluded with a vesper service at the college chapel, Sunday afternoon.
p3
[among]
Delegates To Conference.
Dr. T. I. Brown and Mrs. T. I. Brown, from Morgan College 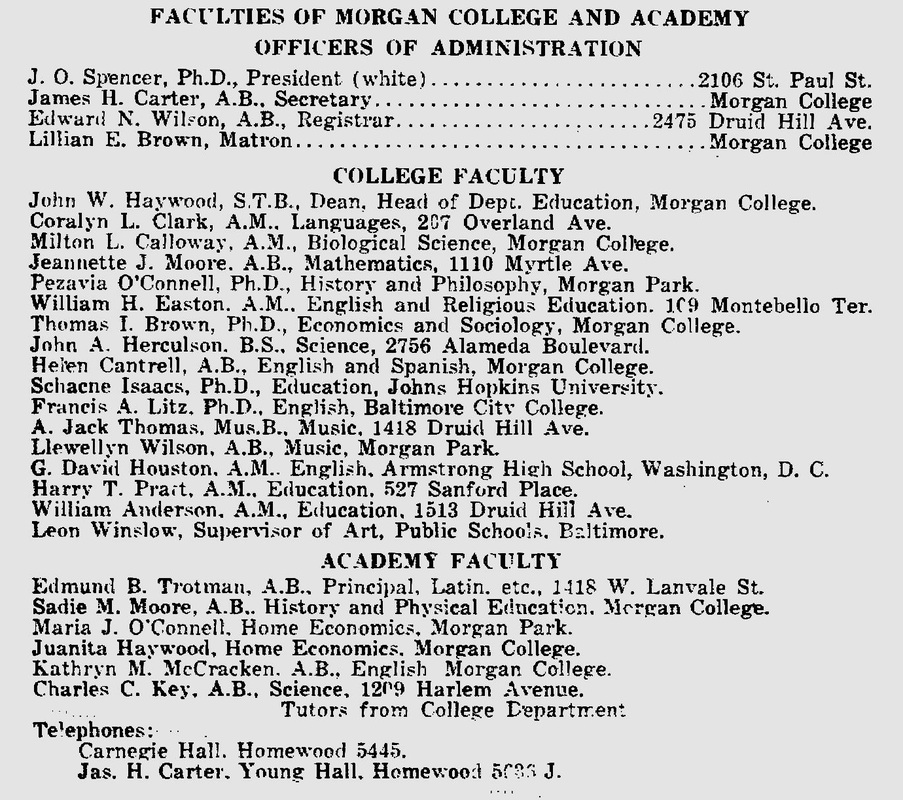 Miner Teachers College was the principal school to train black teachers in Washington, D.C. for more than 70 years. The school was named for Myrtilla Miner, a white woman, who founded a school that was known as both Miner's School and the School for Colored Girls in 1851. The original Miner's School was located in the block bounded by 19th, 20th, N, and O streets, NW. It closed in 1860.
In 1863 Congress granted a charter to re-open the school as the Institution for the Education of Colored Youth, and it held its first classes after the Civil War ended in 1865. From 1871 to 1876 it was associated with Howard University. In 1879, as Miner Normal School, it became part of the District of Columbia public school system.
Lucy Ellen Moten (1851-1933) served as principal of the school from 1883 until 1920. Moten, born in Fauquier County, Virginia, moved to Washington, DC with her family in order to attend the school run by John F. Cook, Sr. She graduated from Howard University in 1870 and began her teaching career in the public school system. Under her leadership, Miner Normal School became one of the top institutions in the country. She oversaw the construction of the Georgia Avenue building in 1913-1914. Leon E. Dessez served as the principal architect and Snowden Ashford was supervising architect of the Colonial Revival style building.
In 1929 Miner Normal School was renamed Miner Teachers College. Eugene A. Clark followed Moten as principal from 1920 to 1926 and as president from 1930 to 1953. (James A. Turner served as principal from 1926 to 1930.) Miner expanded into a four-year curriculum, graduating its first four-year class in 1933.
In 1955 Miner Teachers College merged with the Wilson Teachers College, for white teachers. The new institution was named DC Teachers College, which in turn was absorbed into the University of the District of Columbia in 1977. 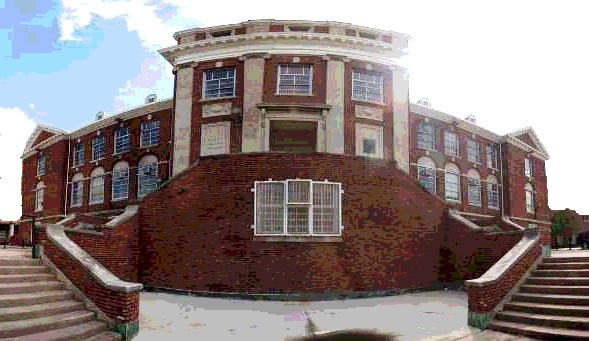 This appears to refer to the record of Thomas Isaacs Brown's death:

The funeral of Professor Brown was reported in the Washington Afro-American for December 20, 1949.

Dr. T. I. Brown Extolled as 'Genuine Christian'
BALTIMORE
Friends and co-workers described Dr. Thomas Isaac Brown as a "genuine Christian," and "inspiring person" and a "good man who was always on God's super-highway," during funeral services for the educator, Saturday, at Grace Presbyterian Church.
Dr. Brown, retired chairman of the social science department at Miner Teachers' College, Washington, and a former instructor at Morgan, Atlanta U. and Philander-Smith, died Thursday at his Morgan Park home at the age of 68, after a 10-month illness.

Body Cremated
The Rev. John T. Colbert, pastor of the church, officiated at the brief rites, with Dr. John W. Haywood, former president of Morristown College and Gammon Theological Seminary, delivering the eulogy. The body was cremated.
Dr. Haywood, who was a close friend of the deceased for many years and who was dean of Morgan when Dr. Brown was professor of history there, said, "Tom Brown was truly a great man . . . through the years we had delightful conversations in connection with our work. I learned to know the person that was in the body.

"On God's Highway"
"Little things betray character -- the little things we say in informal conversation and the little things we do when we are not on dress parade. I knew the real Tom Brown. Out of that intimacy, I can say today, Tom Brown was always on God's superhighway . . ."
Edward N. Wilson, Morgan State College registrar, described his former co-worker as "a genuine Christian who believed in and practiced Christian principles in dealing with his fellowmen, who loved peace and went out of his way to avoid a clash of wills . . ."
Dr. Sadie St. Clair, instructor at Miner where Dr. Brown served for 20 years, recalled that Dr. Brown made "a distinctive contribution to the cultural and intellectual life at Miner," and that "Miner and the public schools of Washington will remember him as an industrious and inspiring instructor, an effective lecturer and a modest and sincere Christian gentleman . . ."

Niece Sings
The Rev. Edward G. Carroll of New York, former Morgan instructor, offered a prayer and Dr. Brown's niece, Miss Sylvia Pinnock of New York sang "There Is No Death."
Born June 12, 1881 in Kingston Jamaica. Dr. Brown was the fourth of six children of Thomas and Diana Williamson Brown. He attended elementary schools in Jamaica and came to the States at an early age, studying for a while at Howard University.
He then moved to Clark College in Worcester, Mass., which awarded him the A.B. degree in 1913; the M.A. in 1914 and the Ph.D. in 1920.

At Miner 19 Years
From 1914-16 he taught history at Philander-Smith College in Little Rock, Ark.: from 1916-22 at Atlanta University; 1922-30, Morgan College, and from 1930 until his retirement in Sept. 1949, was professor and chairman of the social science department at Miner Teachers College.
Surviving Dr. Brown is his wife, Mrs. Lillian E. A. Brown, whom he married in 1917. They met while both were teaching at Philander-Smith College. After their marriage both went to Atlanta U. to teach.
Mrs. Brown also taught in Cincinnati for 25 years and served as preceptress at Morgan for 8 years.
A sister, Mrs. William A. Burris of Jamaica, and five nieces and four nephews also survive Dr. Brown.
Active pallbearers were members of the Miner faculty and the Gamma Boule of Sigma Pi Phi Fraternity of which Dr. Brown was a member.