Jamaica's history - always something new to find out!
'The impact of J. K. Holt, "The Old Master", on Jamaica's cricket as it stands today is immeasurable, because he was the first of the natural, coloured greats to pierce the white barrier of the British Military, the plantocracy and banking ranks.'
Jack Anderson, 1968

The name Holt first made its appearance in the Lucas score-board when Jamaica's first "big batsman", as he was known in his early years, made an appearance at the age of 17.
Freddie Smith, Daily Gleaner, August 6, 1968
J K Holt was born in Kingston (or perhaps Trelawny) in January of 1885. There seems some disagreement about his name; it is generally assumed that he was 'John Kenneth', like his famous son, but in 1928, in an article in the Jamaica Critic, 'N.N.N.' (presumably N N 'Crab' Nethersole) called him 'James Kenneth'. After his death the great sports writer, 'Strebor' Roberts referred to him as 'Joseph Kenneth'. So perhaps the famous initials alone should be sufficient.

However, the clincher may lie in these lines from Anderson's tribute in 1968:
'But never again we will hear the stentorian voice of his admirer and friend, Reggie Matcham, shouting "Shot, oh, John Kenneth". Unless it will be on the Elysian fields.'
Like thousands of Jamaican boys, then and since, Holt first learned his cricket from the games he took part in at school, and from playing with friends on sidewalks and in open lands in his free time.
​      In his development as a cricketer Holt owed something to each of three men - David Ellington, W. E. Wilson and J. W. A. Van Cuylenberg.
In the summer of 1905 Holt played in a trial match to play against the visiting Trinidad team; he scored his first century in fine style!
Daily Gleaner, July 31, 1905

Daily Gleaner, March 7, 1914,
page 2 - Current Items
It is understood that Mr. S. Snow's recent resignation as Captain of the Lucas Club was due to pressure of business, and it is added that the team will now be led in the field by Mr. J. K. Holt, who has returned to the club in which, up to a short time ago, he filled the position of vice-captain. 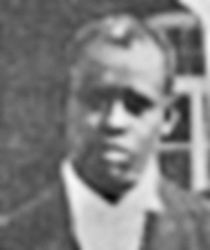 J K Holt senior
described by some as "the W.G. Grace of Jamaica"