Jamaica's history - always something new to find out!
CLOSE 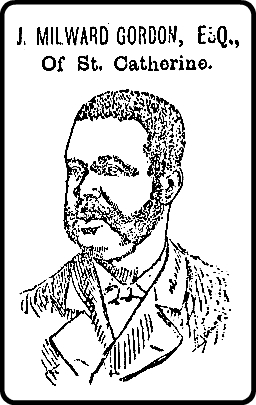 In our issue of last week we mentioned that, during the Kingston Races, when Capt. Kavanagh’s Kismet was put up for sale under racing conditions, Mr. J. M. Gordon, of Spanish Town, became the purchaser for £60. We this week produce his likeness, executed by "our special artist." Mr. Gordon was born in Spanish Town, on the half-yearly balancing day at the Colonial Bank, 30th June, 1853. He was educated at the Collegiate School of which Dr. Andrew Milne was the Head Master, and he made such progress in his studies that he was for several years looked upon as the infant  prodigee, and became one of the exhibits of the institute. In 1870 he left school and entered the battle of life in the office of Messrs. Clunie and Richmond, the well-known Civil Engineers, where he remained for six years, commanding the respect and esteem of his employers, and a general favourite with everybody who knew him. - When Mr. Gordon’s father died in 1879 he and his brother William succeeded to the old gentleman’s business as pen-keepers and butchers. Joseph took to the pen-keeping, while his brother William became the butcher, and together they did a very lucrative business in St. Catherine.  In 1888 William Gordon died, and the subject of our sketch took over the business of his brother and carried out the contracts he had entered into, both in Kingston and St. Catherine with many of the largest of our Public Institutions.
Mr. Gordon has ever since the death of his father contributed every year at Christmas a fine steer for the poor of Spanish Town, among whom this beef has been distributed.  His political life began in 1883, when Representative Institutions were restored to the Island and he was returned at the head of the poll by an overwhelming majority, to a seat at the Parochial Board of his native parish.  In 1889 a party in Spanish Town envious of his success and increasing influence in the country entered into a conspiracy to ruin him, but on his appealing to the Courts of Justice, the conspirators were exposed, defeated and punished, while Mr. Gordon came out unscathed amidst the rejoicing of the parish. In 1890 he was elected and installed Master of the Collegium Fabrorum Lodge of Freemasonry. The wonder to everyone is how it comes that the Custos of St. Catherine has been so slow in placing Mr. Gordon’s name before His Excellency as a proper person to receive a Magistrate’s Commission. Some men lack courage. Between duty and moral cowardice some men’s good intentions often fail when they might have, with a firmer hand, proved true patriots. We hope, however, that His Excellency the Governor will not forget that there are seasons for reward and public notice, and that a black man is not always to be forgotten when others are remembered.