Annals of the wars of the eighteenth century: compiled from the most authentic histories of the period, Vol IV, 1783-1795,
Sir Edward Cust, 1862.

25. MAROON WAR IN JAMAICA To add to the troubles of Great Britain in her colonies at this period, a Maroon rebellion, in which Victor Hugues had probably no part, broke out in the colony of Jamaica. When that colony was conquered from the Spaniards by Oliver Cromwell, the enslaved Africans had retreated to the mountains, insisting that the lands they occupied were their own; they proved a sad thorn in the side of the English from the beginning, and in 1773 [sic] had so increased in numbers that means were taken for their suppression; but these failing, they were left free, with certain privileges, among which was a remarkable stipulation, that they were not to be punished by the judicature of the island, but were to be delivered up to their own people to be tried for any offence or crime. In the month of July, this year, two Maroons detected in a theft, were apprehended, tried by a colonial jury, and sentenced to be flogged; they appealed to the government, but receiving no redress, they sent a written defiance and took up arms. The militia were accordingly called out, but it so happened that at this very juncture the 83rd regiment (almost the only King's troops in the island) had been sent away to St. Domingo. The Governor, Lord Balcarres, with the promptitude and decision of experience, knew that the trade winds must so retard the progress of the transports in which they had sailed, that he might possibly overtake them by sending a fast boat furnished with oars. His Lordship was not mistaken, and it came up with them on the 2nd of August, and diverted their course to Montego Bay, where the soldiers landed on the 4th, under the command of Colonel Fitch; a small detachment of the 62nd regiment had been previously collected, and about 300 mounted dragoons, under Colonels Sandford and Waipole, had been got together in Montego Bay, where Lord Balcarres determined to command the troops in person. The Maroons were staggered at these preparations, and many of the older men surrendered on the 11th to the Governor's mercy; the remainder, however, kept the bush: Colonel Sandford, sent after them with some of the 18th light dragoons, fell into an ambush, and was killed, with several of his officers and men, together with Colonel Guillemon, the Colonel of the militia. One of them, Mr. Barret, was saved by the devotion of his negro follower, who seeing a Maroon taking aim at his master, stepped before him and received the shot, but happily the devoted fellow's wound was not mortal. On the 18th of September, Colonel Fitch was sent against the Maroons with a detachment of the 83rd, but was received by a volley of musketry from the woods, which struck him down to the ground. This unfortunate officer's corpse was found a day or two afterwards with his head separated from his body and entombed in his own bowels! The Colonial Assembly irritated at these misfortunes, resolved to send to Cuba for a hundred of their blood-hounds with some Spanish huntsmen in company to set them on; and Colonel Walpole was now placed in command of the troops. His exertions began soon to be crowned with success before the arrival of the dogs, who nevertheless landed on the 14th of December. The presence of these dreaded animals had a powerful and very salutary effect upon the rebel Maroons, who immediately came to terms, but were so little disposed to fulfil them, that Walpole took the field again, carrying the Spanish dogs in rear of the army The effect was immediate; a supplication for mercy from the Maroons forthwith arrived, and they surrendered on no other condition than a promise of their lives. The Legislature, being at length freed from these terrible enemies, and having them now completely in their power, resolved to ship them off from the island, and they were accordingly sent to Nova Scotia, where steps were taken, at an expense of 25,000l, voted for the purpose, to locate them at Halifax, from whence in 1800 the survivors were removed to Sierra Leone. 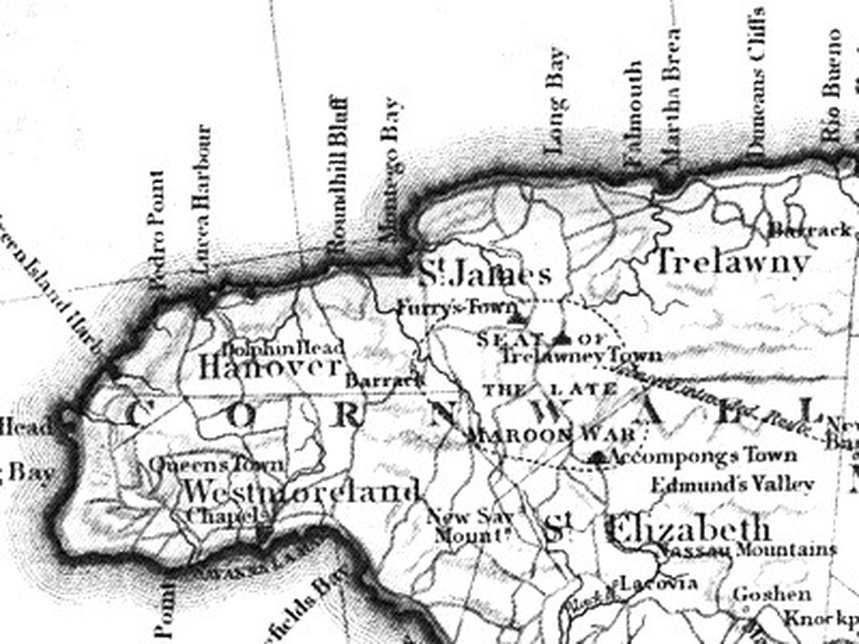 the locale of the 2nd Maroon War
NOTE: Sir Edward Cust, 1st Baronet, Knight Commander of Hanover, (17 March 1794 – 14 January 1878) was a British soldier, politician and writer. He was a younger son of the 1st Baron Brownlow and was educated at the Royal Military College. In 1810, he joined the 16th Regiment of Light Dragoons as a cadet and was a captain of the 5th Regiment of Dragoon Guards from 1816 and Major of the 55th Regiment of Foot from 1821.
From 1818, Cust sat in Parliament as MP for Grantham until 1826 and then for Lostwithiel from 1826-32. In 1831, he was awarded the KCH by William IV for his military service, and in 1835 he was appointed as one of the Royal Commissioners for reporting on the plans offered by competitors for rebuilding the Houses of Parliament.
He visited the West Indies in the late 1830s, and in 1839 published Reflection on West Indian affairs, after a recent visit to the colonists, but I have so far been unable to locate a copy.
In 1845, Queen Victoria appointed him Assistant Master of the Ceremonies and was promoted as Master of the Ceremonies in 1847. He wrote several series of popular histories dealing with war and warriors. In 1876, he was made a baronet.