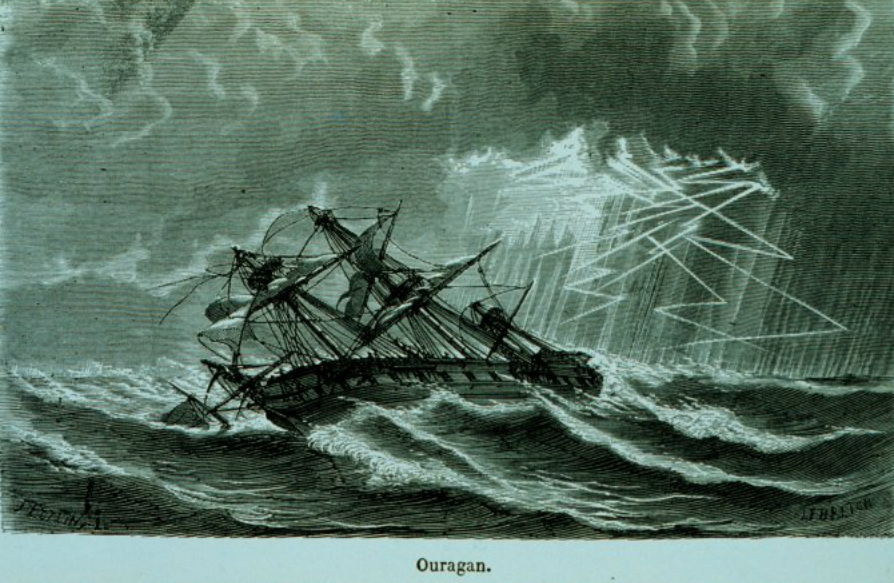 Before the Europeans came . . .
Clearly hurricanes have affected Caribbean islands for thousands of years, but information on these storms which occurred before recorded history is bound to be limited.
In The Deadliest Atlantic Tropical Cyclones, 1492-1996, Edward N. Rappaport and Jose Fernandez-Partagas write:
'The legacies of Atlantic tropical cyclones span many cultures and thousands of years. Early evidence of these storms predates extant weather records. Geologists believe that layers of sediment at the bottom of a lake in Alabama were brought there from the nearby Gulf of Mexico by storm surges associated with intense hurricanes that occurred as much as 3,000 years ago. Similarly, sediment cores from the Florida west coast indicate exceptional freshwater floods during strong hurricanes more than a thousand years ago.' Jamaica would have suffered similar impacts.

In a cryptic comment in The West Indies, (1987), David Watts writes,
'Hurricanes appear to have brought about a terminal decline in at least one of the pre-Arawak Indian cultures [the Redware culture] of Jamaica (Wilcox, 1985)’.
Unfortunately there seems to be no entry for Wilcox, 1985, in his list of references; I will have to make greater efforts to find this source, which so far eludes me.
The lists on these pages include all the hurricanes that hit Jamaica to which I have so far found references, in lists on websites, and in books. The number of hurricanes, so far noted, is seventy-two or so, which seems enough to be going on with. However, there clearly were more during the Spanish period from the early 16th to the mid-17th century; these will be harder to identify and date, because of the more limited records. There may be other 18th and 19th century hurricanes that have escaped note.  However, I will try to up-date the list from time to time.

1597
'Sixteenth century Jamaica had no meteorological warnings that a storm born in the Leewards was headed for the island. The first sign of impending disaster came during the previous day when an ominous stillness filled the atmosphere and not a leaf stirred on the trees. The morning sun was reported to have changed to an awesome orange hue in the late afternoon, while several hours previously storm winds began to stir, mounting in intensity as time progressed until black clouds darkened the heavens with heavy rains driven by the fury of the storm. Gusting up to one hundred miles an hour, the hurricane swept through the streets of Santiago de la Vega, driving the rain with such force that it entered every crevice, lifted roofs from their supports, and hurled them miles away, while walls collapsed like paper. The storm’s [counter-]clockwise action struck the town first from the south [north?]; then, after the eye’s lull of fifteen minutes, struck it with the same fury from a northerly [southerly?] direction - four hours of merciless batter­ing. The capital was in worse condition than Shirley [Sir Anthony - an English pirate] had left it the previous year, and Villalobos [Abbot of Jamaica] was a much humbled prophet as he stood before his church on the morning of 2 August 1597 and viewed its ruined walls and gaping roof, then walked over to the Dominican monastery leveled to the ground. He recalled the words he wrote to Philip II, [Nov 1582],  “Hurricanes there used to be, but by the grace of God, they have ceased.” '

However, I think Fr. Osborne has the wind directions etc the wrong way around in the highlighted sentence.

See  http://www.aoml.noaa.gov/hrd/tcfaq/D3.html
'... when a low pressure starts to form north of the equator, the surface winds will flow inward trying to fill in the low and will be deflected to the right and a counter-clockwise rotation will be initiated. The opposite (a deflection to the left and a clockwise rotation) will occur south of the equator.'

During the period from their capture of Jamaica in 1655, to 1689, 34 years, the English apparently experienced no direct-hit hurricanes (cf 1951 to 1988 when no hurricane hit Jamaica head-on). The impression may even have developed that Jamaica did not experience hurricanes, unlike the islands of the lesser Antilles; this was a very early period in the study and knowledge of tropical cyclones.
1689
Maxwell Hall mentions this storm, but suggests that it was probably not very severe, since reference to it was dropped in later Jamaica Almanacs.

1690  August 7,
Bybrook Plantation: because a great hurricane had blown down "all our planton walk we was like to starve the negroes" provisions proving so dear. They managed to subsist on "a sort of Corne that grows here." All of the growing canes on every plantation in the vicinity had been flattened by the storm. John Austin quoted in No Peace Beyond the Line, Carl and Roberta Bridenbaugh, 1972.
MONTHLY WEATHER REVIEW. DECEMBER, 1915 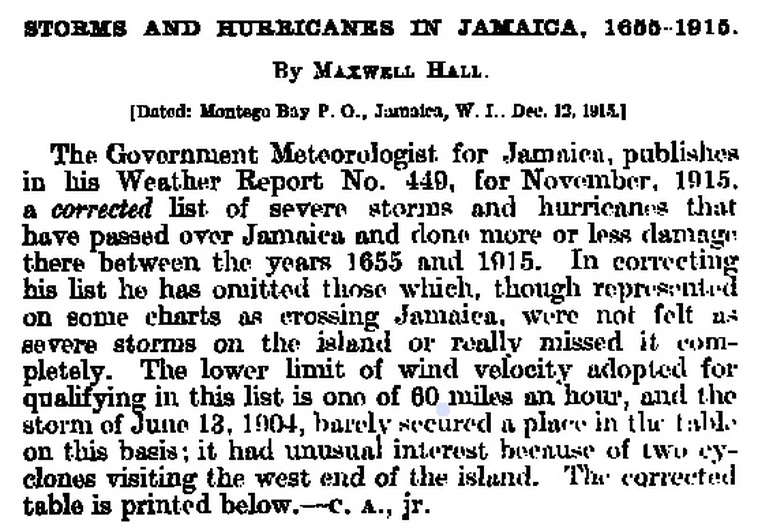 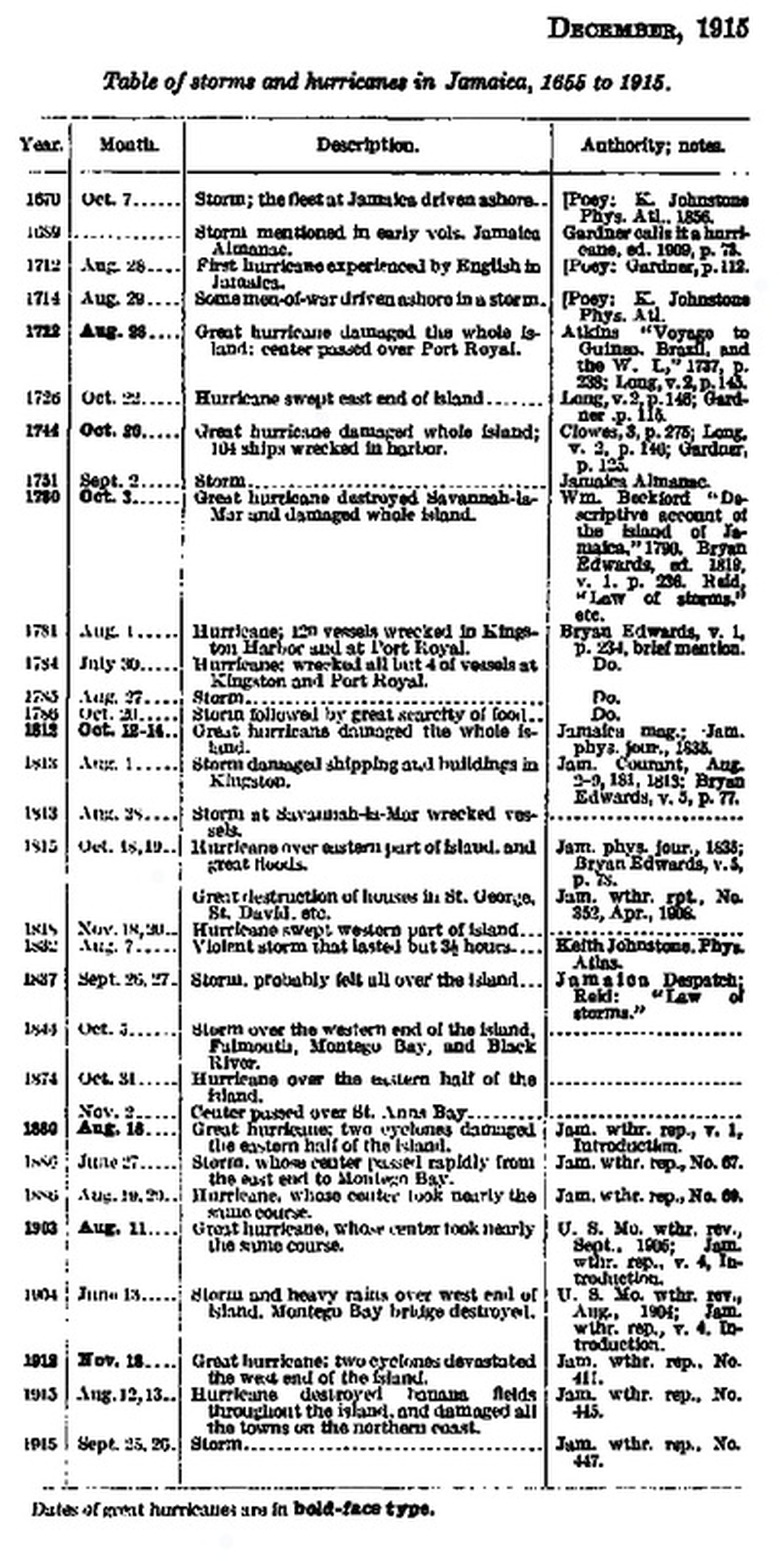 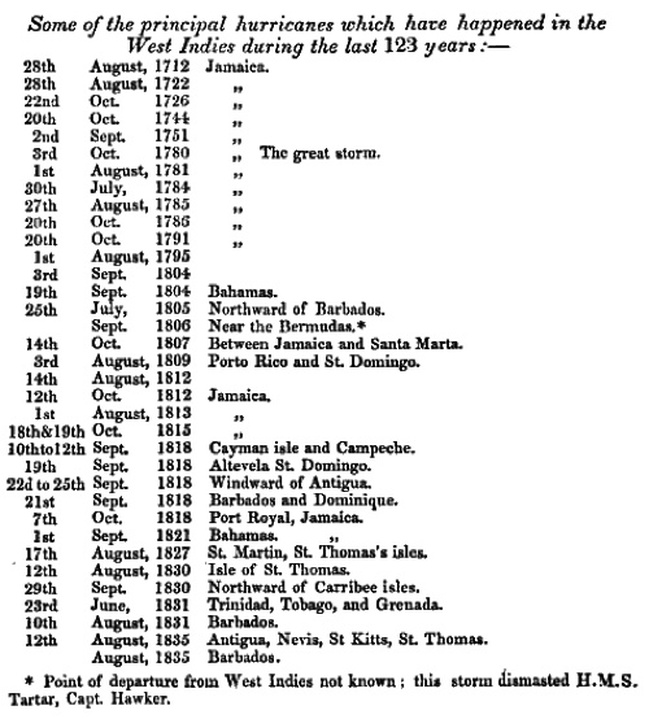