The Victoria Market, 1872-1970
The earliest description I have seen, so far, of the market at the foot of King Street is Long's enthusiastic account; it seems likely that the market had existed from the establishment of Kingston after the 1692 earthquake, so there may be earlier descriptions - can anyone help?

At the bottom of the town, near the water-side, is the market place, which is plentifully supplied with butcher’s meat, poultry, fish, fruits and vegetables of all sorts. Here are found not only a great variety of American, but also of European, vegetables; such as pease, beans, cabbage, lettuce, cucumbers, French beans, artichokes, potatoes, carrots, turnips, radishes, celery, onions, &c. These are brought from the Liguanea mountains, and are all excellent in their kind. Here are likewise strawberries, not inferior to the production of our English gardens; grapes and melons in the utmost perfection; mulberries, figs and apples, exceedingly good, but in general gathered before they are thoroughly ripe. In short, the most luxurious epicure cannot fail of meeting here with sufficient in quantity, variety, and excellence, for the gratification of his appetite the whole year round. The prices are but little different from those of Spanish Town; but, where they disagree, they are more reasonable at Kingston, the supplies being more regular, and the market better superintended by the magistracy. The beef is chiefly from the pastures of Pedro’s, in St, Anne; the mutton from the Salt-pan lands in St. Catherine; what they draw from the penns in St. Andrew’s parish being very indifferent meat.
The History of Jamaica, Edward Long, 1774


Daily Gleaner, March 31, 1970
Gleaner Staff Reporter
A famous Kingston landmark is disappearing, shortly, with the demolition of the Victoria Market at the foot of King's Street.
First opened to the public on May 24, 1872 — the anniversary of Queen Victoria's birthday — the market was named for the grand old Queen by the then governor of Jamaica, Sir John Peter Grant.
Since then, the Victoria Market has had a long and colourful career. In addition to being the central meat and vegetable market of the city, it was also the traditional centre for Christmas morning festivities during the early 1900s.
In 1956, the old and famous market underwent a change. Condemned by the then City Fathers as no longer safe for use as a market, it was taken over by the Jamaica Industrial Development Corporation, which converted it into a crafts centre, the first of its, kind in the Caribbean. Although reported to have been suffering from "metal fatigue," the old building was tested by engineers at the request of the J.I.D.C. and found to have many more years of life.
So, as the Victoria Crafts Market, as it was re-named, the former meat and vegetable market became a shopping bazaar, a centre for native handicrafts and other manufactured products of Jamaica.
Straw goods predominated, for .one of the prime purposesof the establishment of this Victoria Crafts Market was to remove the sellers of straw goods from the streets in the waterfront area, and place them in a proper setting.
The northern section of the market was devoted to these straw-goods vendors, who made a colourful contribution to the appearance of the market with their variegated displays of bags, baskets, shoes, hats, mats and other decorative straw goods.
A number of other shops and booths were set up in the southern section, and in the courtyard, for the sale of a wide assortment of Jamaican-made goods — pottery, hand-painted textiles, native jewellery, needlecraft, woodcraft, cigars, rums and liqueurs, painting and sculpture.
A cocktail lounge offered food, drink and Jamaican music.
As it grew in fame, the Victoria Crafts Market became a mecca for visitors, especially those on one-day cruise-ship calls at Kingston, eager to get souvenirs of their visit to Jamaica.
Jamaicans, too, patronized the market, purchasing presents for relatives and friends overseas and relaxing on a holiday afternoon in the cocktail lounge, which became a popular rendezvous over the years.
Now, after 98 years of exciting life, the old market is to disappear. As from today, the Victoria Crafts Market is being closed, for a transfer to a new site; and the old building is to go under the wrecker's hammer, making way for new construction as part of the Kingston Waterfront Re -Development Programme.
Within a short while, the sprawling metal frame building, with its high zinc roof and ornamental iron grillwork, its ornate fountain and splendid courtyard, its arched clock-tower gateway, will be no more.
As has been stated, the historic gateway and fountain are being preserved, being removed to another location at Devon House, where they will remain as a permanent reminder of the old city landmark.
But the old building, with all its memories of the shrill cries of the fruit and vegetable vendors, the sharp smells of the meat stalls, the merry sounds of Christmas market with its fee-fees, rattles and John Canoe music, will be gone forever. 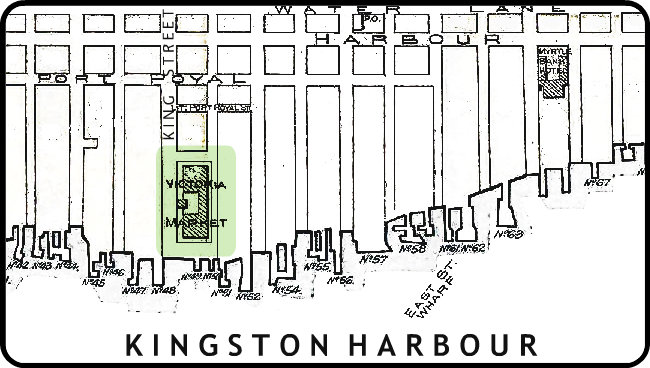