Jamaica's history - always something new to find out!
1692 and beyond

"Ah brother!," a Jamaican QUAKER wrote home two weeks after the earthquake,
"If thou didst see those great persons that are now dead upon the water thou couldst never forget it. Great men who were so swallowed up with pride, that a man could not be admitted to speak with them, and women whose top-knots seemed to reach the clouds, now lie stinking upon the water, and are made meat for fish and fowls of the air"
[John PIKE to his "Loving Brother," June 19, 1692, in The Widow Witherow's Humble Thanksgiving...with a Letter from Jamaica concerning the Earthquake that happen'd there (London, 1694), quoted by Henry J. CADBURY in his unpublished essay, 'QUAKERS and the Earthquake at Port Royal, 1692'.]

The Quakers, who are usually accurate in their claims, listed 38 dead out of their community of about 60 in Port Royal;  others died later from epidemics that spread after the disaster.
'The Lord hath a very great controversy with this island' Joseph Norris to his brother Isaac in 1692.
A Quaker family which suffered severely from the earthquake was that of Thomas Norris (or Norrice) who had been a member of the Society of Friends from its early days. Thomas was a London merchant who emigrated to Jamaica c 1678. His son Isaac, aged about 21,  was in Philadelphia in 1692 on business connected with the growing trade between Jamaica and Pennsylvania  when the earthquake struck. Thomas Norris died in the earthquake, and when Isaac returned to Port Royal he buried his brother and sister who died in the aftermath of the disaster. In 1693 Isaac decided to take the £100 which was all that was left from his father's business and return to Philadelphia, where he became one of the city's wealthiest merchants and a prominent public figure. 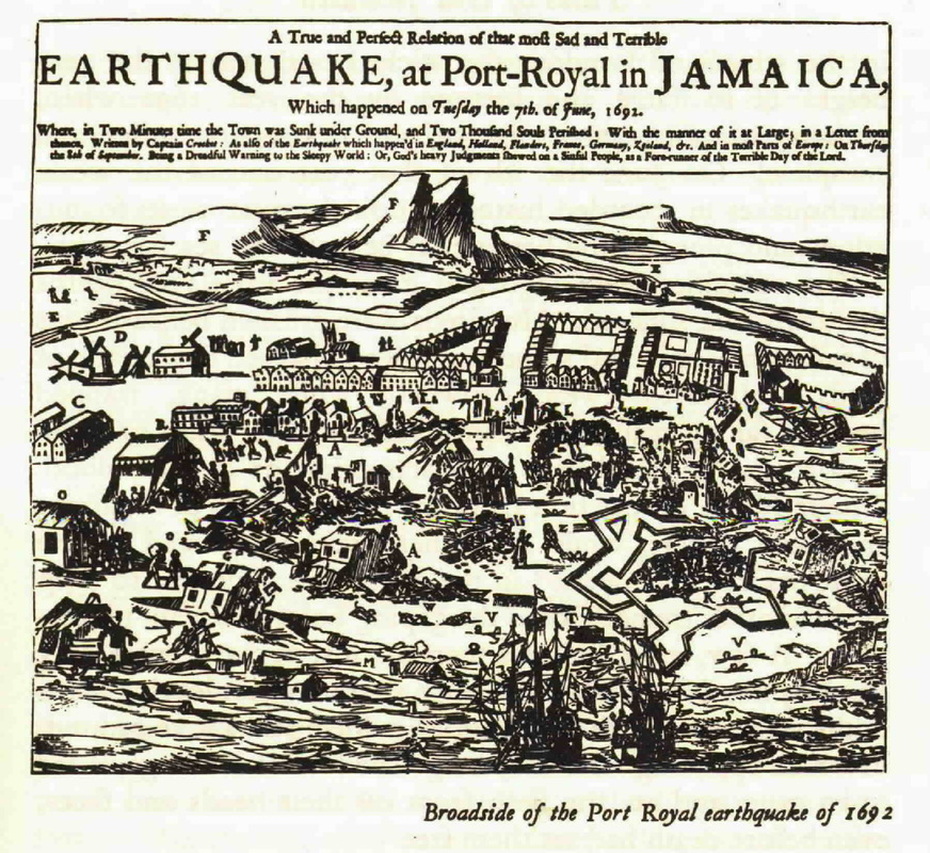 It is important to note that at this time Quakers were still slave-owners and slave-traders like the members of other Christian denominations. There are a number of references to issues in Barbados over the Quakers bringing their slaves into their worship, but so far no references to this practice in Jamaica have come to hand. Quakers were certainly involved in trading slaves between the Caribbean and North America and both Jonathan Dickenson [of whom more anon] and Isaac Norris are noted as trading in slaves. Norris is reported to have written 'I don't like that kind of business', but like many of his fellow Quakers he did not pursue the logic of his religious beliefs. However, in 1711 the Mennonite Quakers and the Pennsylvania Yearly Meeting persuaded the legislature in Pennsylvania to ban the slave trade, but the British government of Queen Anne vetoed the law. It was only in the 1760s that the ongoing protests and opposition to slavery and the slave trade by individual Quakers and Quaker Meetings led to Meetings in Britain and America coming out firmly against these evils and obliging members of the Society of Friends to make a choice between their religious faith and their commercial activities.

A Quaker family of note in Jamaica in the 17th century was the Dickinson (or Dickenson) family in St Elizabeth. The family name is still remembered today because of its involvement in the Munro and Dickenson Trust which still administers the two schools, Munro College and Hampton School, in St Elizabeth. 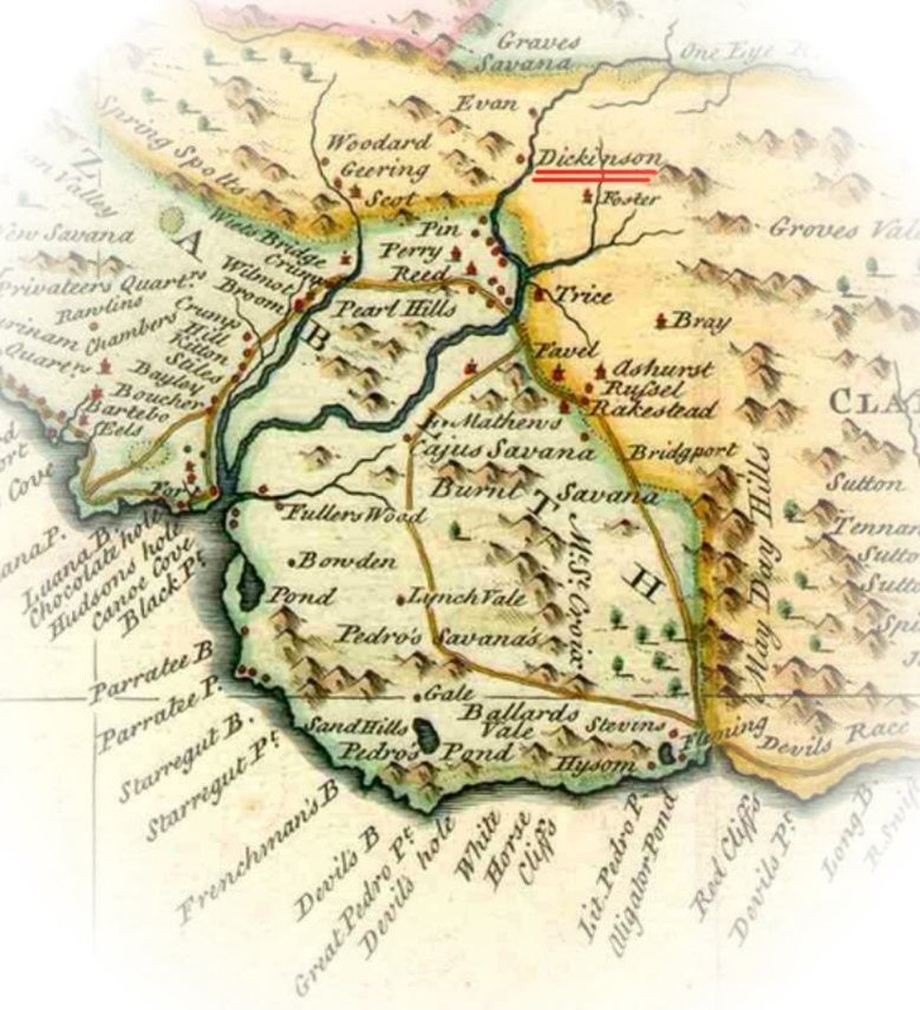 St Elizabeth, mid-18th century
It is claimed that Captain Francis Dickinson came to Jamaica with the Penn and Venables expedition in 1655, and was rewarded for his service in the capture of Jamaica by substantial grants of land in what later became the parish of St Elizabeth. So far I have found no documentary support for this narrative, though it may well be factual.
Francis was the son of Rev. William Dickinson, Rector of St Lawrence's Church, Appleton, then in Berkshire.

Jonathan Dickinson Ledger, 1699-1701
In 6 months in 1699, Dickinson, established as a merchant in Philadelphia since his momentous voyage from Jamaica in 1696, traded 83 casks, 174 half barrels, 66 quarter barrels, and 9 barrels of flour to 100 customers in his old home, Port Royal, Jamaica. This was probably enough flour to bake bread for the whole population of Jamaica at the time. He also shipped 47 barrels of bread, and 33 hogsheads, 5 barrels and 3 tuns of Pennsylvania beer.