Jamaica's history - always something new to find out!
Jamaican Historical Society Bulletin  October 1995 Vol  10 No 12  pp130-3
3. COLBECK CASTLE: ‘a riddle wrapped in a mystery inside an enigma’ After reading the articles on Colbeck Castle in Vol. 6 of the Society’s Bulletin, the above heading is about as close as I can get to a suitable sub-title for a comment on this building. Unfortunately, no-one had been alerted to prepare an introduction to Colbeck Castle for our trip there in July, and a quick survey of the Vol. 6 articles did not help much in providing a snappy summary of their contents. The most conspicuous fact about the Castle seems to be that very little is known about it. It was first mentioned by the name ‘Colbeck Castle’ only in 1896 in an advertisement for the sale of the property at that time. Before that, although the Colbeck property is mentioned, and at least one house is mentioned, no-one seems to have recorded the existence of a building as substantial and distinctive as that whose ruins we can now visit.
In Vol. 6 there are articles about the castle by B. Machado, then Editor, and S. A. G. Taylor, and references to research by Geoffrey Yates, Tom Concannon and H. P. Jacobs; there are also reproductions of pictures/photos of the castle (those opposite p. 201 do not get a mention in the Index, and I only found them by accident). All this material only serves to create confusion in the mind of the reader. The writers disagree as to the possible time of the building of the castle, which apparently could have taken place at a variety of times in the late 17th century, or in the 18th century. It is also not known who built it or why, though it seems unlikely that it was built as a defensive position. It is not clear whether it was ever completed, and if it was, it was almost certainly never inhabited. It may have been damaged by hurricanes and by fire, but if so, the fire was probably minor, and comparatively recent. One certainty seems to be that it has been vandalised in the past and that it continues to deteriorate, as nothing much seems to be being done at present to preserve and maintain it.
It is a most impressive structure; having never seen it before I could scarcely believe my eyes when I saw it loom up over the acres of surrounding scrub. Tom Concannon described its external appearance as being a copy of a 17th century Italian villa, and I expect he knew what he was talking about, but how or why such a structure came to be built in Jamaica, whenever it was built, seems permanently hidden from us. I wonder if a survey of existing knowledge, and further research, might throw more light on its origins. Even if we cannot find out anything more, we ought to be able to maintain it better, and make it a site fit to be visited; I’ve certainly visited ruins in England which are less impressive and with almost as little history, which still manage to attract the visiting tourist.
Perhaps some member of the Society might wish to take the following extract from a currently available guide book (published 1993) as the starting point for a reappraisal of the castle and its history: ‘Colbeck Castle is located two miles north of Old Harbour on a side road. Once perhaps the largest building in the Caribbean, it is generally thought to have been built in the late 17th century by an English settler named Coll. John Colbeck, as protection against Maroon attacks and possible invasion by the French. The main walls of this huge brick mansion are still erect, although the roof and floors are gone. Beam slots in the higher walls give an idea of the size of beams used in the construction. Four underground slave quarters can be seen at each corner of the castle. The building is in the midst of what is now a large tobacco farm.’ Alternatively, the Editor might wish to announce a contest for contributions to the Bulletin listing the largest number of queries about statements in this passage! I will offer a copy of Robin Blackburn’s The Overthrow of Colonial Slavery, 1776-1848, (London, 1988) as a prize for the most comprehensive list. [This offer no longer applies; my grandchildren long since took over my second copy of Blackburn!]
articles on this page - 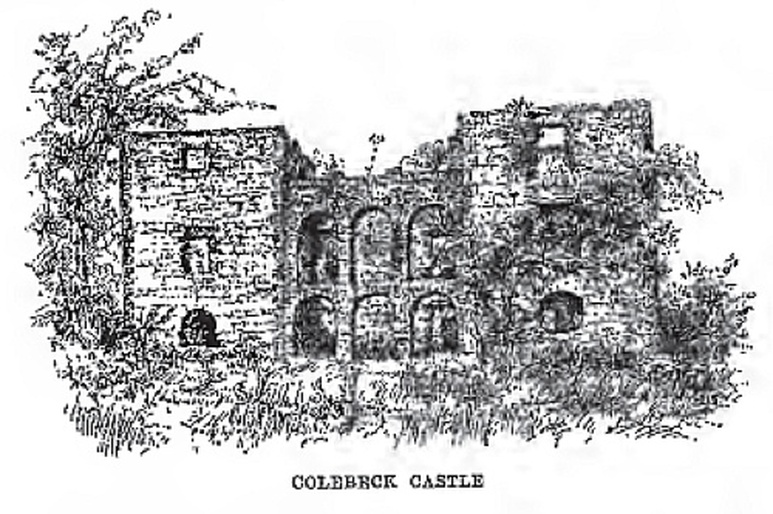 from Historic Jamaica, by Frank Cundall, 1915
(so far, this drawing of Colbeck Castle, by Mrs Lionel Lee, is the earliest that I have been able to find)

"Yerri, Yerri, Koongo": A Social History of Liberated ... - Page 236
Monica Elaine Schuler - 1977
Employed on his return on Stephen Hannaford's Ann's Castle, St. Dorothy, Clarke did not remain long, for he sailed once more on the Glen Huntley a month after his arrival.

[I would like to be able to access an article in Western Ontario history nuggets which deals with an area of Jamaica on which I am doing some research. Via Google books I have this rather vague reference - Western Ontario History Nuggets, Issues 28-32, Lawson Memorial Library, University of Western Ontario., 1959. The article has references it appears to 'Mr Hannaford' 'Colonel McLeod' and 'Colbecks Estate', all of which relate to my research. I very much hope it may be possible to purchase a .pdf copy of the article, and that you may be able to put me in contact with the relevant department. Many thanks, Joy Lumsden, 10 years retired from the Dept of History, Mona Campus, UWI.]

HON. WILLIAM4 MALABRE was born January 27, 1833 in Kingston, Jamaica, and died August 28, 1895 at his residence on North Street, Kingston, Jamaica.
Justice of the peace for Kingston, St. Andrew and St. Catherine
One of 4 Vice-Presidents of the Jamaica Society of Agriculture and Commerce
Member of the Legislative Council for Kingston & St. Andrew 1884-1889
Proprietor of Colbeck Estate, St. Catherine
Kingston, William Malabre & Co., General Agents for Royal Insurance Company, Fire & Life.
The firm of William Malabre & Co was liquidated after his death in 1895 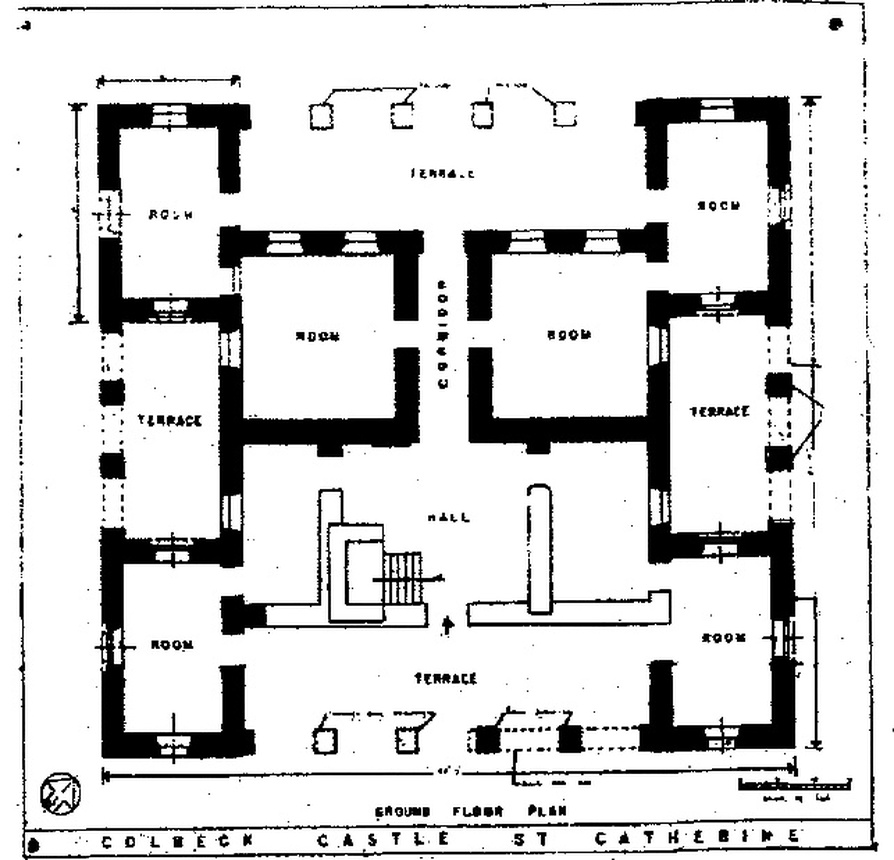 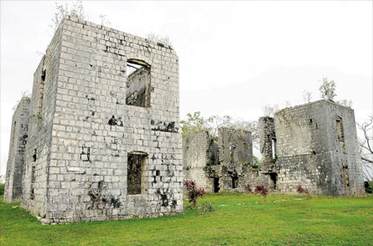 Stokes Hall, St. Thomas
Similarity.
Colbeck Castle has some similarity to Stokes Hall, a house near Golden Grove in St. Thomas constructed circa 1710. Both buildings have a rectangular central unit, with four corner blocks roofed at higher level, the whole very solidly constructed and fortress-like in appearance. Stokes Hail is, however, on a smaller scale, with a different elevational pattern lacking the fine brick detail and graceful arcades of Colbeck.
Another early house, this time less than ten miles from Colbeck is at Malmsey Valley near Rock River in Clarendon. Here we find excellent brick construction remarkably like Colbeck, particularly in quoins and door and window reveals. Malmsey Valley house is a two-storied structure now alas, in ruins, but enough of the fabric remains to indicate a close tie with Colbeck.
A tentative date is offered as circa 1740, from a reference in the Crop Accounts for 1740-42 (in the Jamaica Archives at Spanish Town) recording "Properties of Peter Beckford Sr. Dcd . . . Malmsey Valley Plantation . . . "
It has been suggested that construction of the whole group at Colbeck was never completed, as evidenced by a large heap of lime found some years ago in the compound, and by weep-holes in the boundary wall above ground leveL In a reference to the building Cundall remarks "It was evidently at one time partially destroyed by fire" without, however, quoting his authority for this statement.
A visitor in 1964, a well-known English historian, said . . that Colbeck resembled a house known to him to have existed in the south of Ireland, but unfortunately no drawings or photographs of the Irish 'pastiche' have so far come to hand. All this added to doubt concerning its date makes Colbeck a fascinating puzzle, a sort of architectural mystery story about which one asks "Oodunit — and when?"
If any reader of this is able to shed light on the history of this unique building information would be gratefully received and acknowledged by the writer.
By generous gift of the owners Colbeck Castle and a small area of adjoining land is now the property of the Nation, vested in charge of the Jamaica National Trust Commission. The public are free to visit at any normal time, by way of the road and track leading into the site from the north, reached by tuning north at the clock tower in Old Harbour.

Sugar and Slaves, Richard S Dunn, 1973
pp 295-6
. . . the imposing ruins of Colbeck Castle in Jamaica possibly show us how a big planter lived. Colbeck Castle stands in an unkempt pasture a few miles from Old Harbour on the south coast of the island. The date of this curious structure is much in doubt. Popular tradition has it that Col. John Colbeck (d.1683), one of the principal early planters in Jamaica, built the place.[54] But more probably it was built in the mid-eighteenth century. Colbeck Castle is a grand, gloomy pile of gray limestone trimmed with brick, so singular in its design as to defy architectural periodization. It is a much larger building than any of the other surviving early island houses. In scale and plan it resembles a seventeenth century English aristocrat's great house.The three-storied central block is almost square, ninety-four by eighty-four feet, with walls three feet thick and thirty-six feet high. There are four massive corner towers with distinctive round porthole windows at ground level. These towers are joined by aqueduct-style double arcades, which provide shaded terraces and balconies on all sides of the building. Inside there is abundant display space; the grand staircase and terraces occupy twice the area of the six rooms on each floor. The kitchen, bakery, and other service rooms are far removed, placed in four symmetrically arranged outbuildings situated at the outer perimeter of the castle's two-acre compound. On a street plan of Kingston, circa 1740, there is a picture of a town house strikingly similar to Colbeck Castle, with much the same corner towers, arcades and round porthole windows.[55] Corner towers are a feature of early eighteenth-century houses, Stokes Hall and Halse Hall both have them. Colbeck Castle, with its many large apertures, was poorly designed for a fort, but very well designed for tropical living. If, as present evidence suggests, it was built in 1748, the building illustrates a new and better approach toward tropical architecture, providing for more cool shade and ventilation than the stuffy houses Ligon and Sloane complained about.[56] 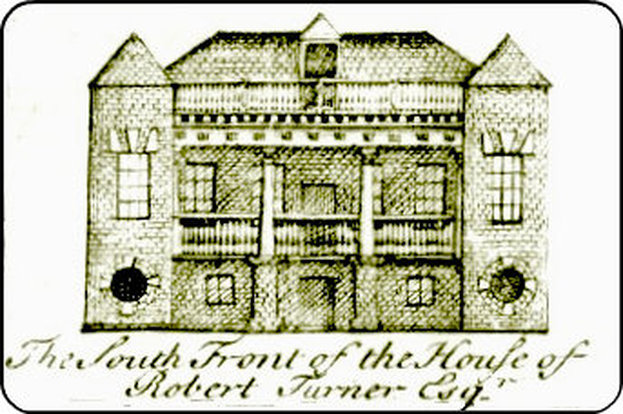 from Hay's city plan of Kingston, Jamaica, circa 1745
notes:

54. Colbeck came to Jamaica with the army in 1655, patented 7,732 acres (including the land where the castle stands), became speaker of the Assembly, and died shortly after being elevated to the Council, leaving no male descendants. His land grants are in Jam. Land Pat., some Colbeck papers are in the Institute of Jamaica in Kingston, and his tombstone is in the Spanish Town Cathedral.

56. T. A. L. Concannon, the leading architectural historian in Jamaica, found a date - either 1748 or 1848 - cut into the undercoat of plaster on a wall of Colbeck Castle. Writing in a Jamaica periodical, The Masterbuilder, (June 1965), he leans toward 1748 as the more probable date of construction. 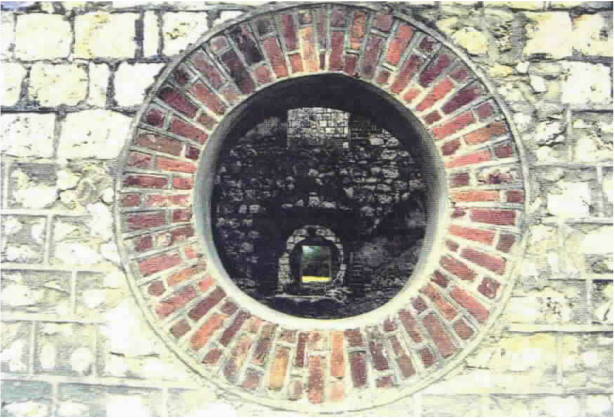