Jamaica's history - always something new to find out!
Mr. Lazarus—a man who had done more for his country than many who blew trumpets.Daily Gleaner, October 2, 1913 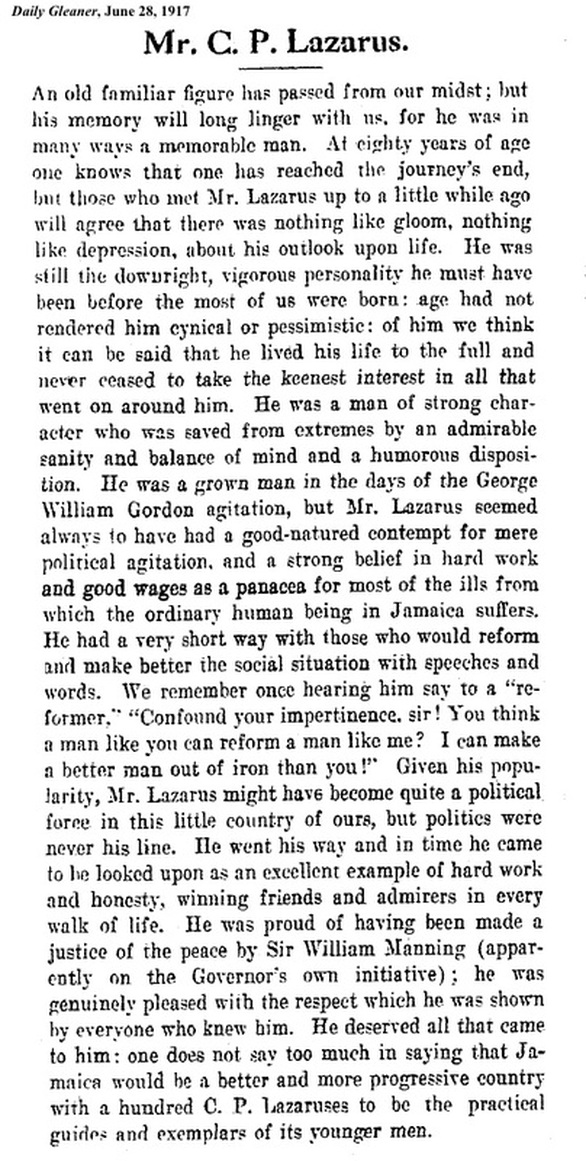 - an editorial obituary in the Gleaner, probably written by H. G. deLisser
Daily Gleaner, June 17, 1917
DEATH OF A WELL-KNOWN RESIDENT OF KINGSTON
PASSING AWAY OF MR. LAZARUS
Death of a Useful Citizen and Able Engineer.
LIVED A LONG LIFE.
Trained Some of the Best Mechanics in Jamaica.
It is with a feeling of regret that we chronicle this morning the death of Mr. Charles P. Lazarus, J.P., a well known and highly esteemed citizen of this community. The sad event took place at his late residence in Upper Elletson Road early yesterday morning.
Mr. Lazarus was born in Kingston on the 1st May, 1836. His grandmother came over from Hayti when quite a young: woman. She spoke "creole" French, but never learnt to speak English though she understood it. She died at the age of 90.  His mother was born in Jamaica and died on the 5th July, 1893. when she was 84 years old. The deceased, went to school to a Methodist governess opposite the present  Wesley Chapel, when the "Founders Fire" occurred in August, 1843. It destroyed a great part of Kingston, Wesley schoolroom included, but by the greatest effort the chapel was saved. In 1841 he was sent to the Roman Catholic school in Sutton Street, the teacher being a Mr. Andrew. In 1847 he was sent to Wolmer's Free School and left in the mid-summer of 1849. He then began work for himself. He was put with Messrs. Hancock and Seymour, architects and builders, who had the laying down of the Kingston and Liguanea Water Works. He was sent to learn the trade of a plumber and was indentured on the 5th December, 1849. On Hancock and Seymour losing the contract with the ate Works Directors, they gave up business in Jamaica, and the deceased went to work with the man who had been their foreman, namely, Mr. Arthur Thomas James. After working with the old Water Company, and Mr. Knaggs as plumber and brass founder, Mr. Lazarus started business on his own account, when he was 19 years old. Two years after this start, his first opportunity to make his mark came. Messrs. Emanuel Lyons and Son sent him to work as a coppersmith on Belmont Estate in St. John, the properly of the Hon. Edward Thompson. From that time his services were sought by the planters who had seen his work, and the demand for him grew rapidly. The encouragement thus given to him enabled him to take another important step in his career, and in 1863 he established a large foundry in Kingston. Still he was only able to cope with out-door estate work nearer home, and subsequently he found it best to confine himself principally to the work he got in the parish of Vere. His close relationship with planters and estates gave him a remarkable insight into the sugar industry. The West End Foundry, of which he was the head, has been the best equipped establishment of its kind, and has been a training school for the young men of Kingston for the last 48 years, during which time the foundry has turned out nearly 1,000 young men. In 1870 he took part in the work of the laying of the submarine cable which was entrusted to Sir Charles Bright, the distinguished engineer. Entire satisfaction was expressed with his work, and he was payed £800 for the job. His next heavy job was the casting of a water-wheel for the Savoy Estate in Clarendon. The casting of this wheel aroused a vast amount of interest, and on its completion, the then Governor of the island, Sir John Peter Grant, K.C.M.G., commended him on his splendid achievement.
Mr. Lazarus retired from active business some time ago, but he took a deep interest in all matters appertaining to the welfare and the development of the island. He was formerly a member of the Mayor and Council of Kingston and was appointed Justice of the Peace for Kingston in 1916, and a member of the Advisory Committee of the Kingston Technical and Continuation School in this city.
On the first of May this year, Mr. Lazarus celebrated his 81st birthday. He was moving about the city up to about three weeks ago, when he became seriously ill. He was taken to the St. Joseph's Sanatorium and successfully operated on. He came out the hospital feeling better, but a few days ago he became ill again and yesterday morning he peacefully passed over to the Great Majority.  A useful life has thus been brought to a close.
Mr. Lazarus is survived by a widow, and to her the Gleaner tenders its condolence.
The funeral took place yesterday afternoon. The funeral service was held at the Roman Catholic Cathedral, and the remains of the deceased gentleman were subsequently interred at the Catholic Cemetery in Lower St. Andrew.

LATE MR. C. P. LAZARUS, J.P.
Sir,— It was with profound grief that I read of the death of Mr. C. P. Lazarus in your valuable issue of Wednesday last. As one who had served him as clerk in his office for some time in my early life, I am able to bear testimony to Mr. Lazarus' sterling qualities; he was a man very peculiarly blessed. Mr. Lazarus always felt that he was born to lead his race, and this attitude he manifested in the pleasure he took to educate hundreds of' men and boys at the lathe, mould, furnace and other departments associated with engineering pursuits, all of whom revered him with greatest veneration. Mr. Lazarus was a man who entertained the surest admiration for talent, and the man or boy who evinced this power could surely rely upon his favour and kindly feelings, whether it be in the machine shop, the offlce, or at home.
As an engineer, he superseded his fellows in the craft, they never were able to inform him on any points while he was always convincing them of their errors.
As an instructor, he assumed first place, and the men who 'sat at his feet' were sure to secure employment, where others failed. As a friend he was faithful and a great advocate for the right, but as an enemy, he was obstinate, and though many regarded him as wearing an exact exterior, yet internally there was the perennial flowing of perfect benevolence.
Mr. Lazarus never turned himself away from the poor who solicited alms nor did he show any aversion to those in the lower walks of life. He was generous to the unfortunate. It was in the latter part of February this year, we had a talk about the establishment of Central Sugar Factories, and made such suggestions that were bound to take success with them. Unfortunately he had not the opportunity to see the formation.
I take great pleasure in endorsing the sentiment of the Editor of the Gleaner, when he said in his leader of Thursday, that Mr. Lazarus was entitled to all the encomium that went to him, and I maintain that though he had lived his limit, yet Jamaica in general, and Kingston in particular, has lost by death a man and citizen of richest talents.
I beg to take this opportunity to extend to the bereaved widow and relatives, my sincere condolence.
I am, etc.,
W. THEO. BAILEY.
The Parsonage,
Old Harbour P. O.
29. 6. '17.