This topic will deal chiefly with beekeepers and beekeeping in the second half of the 19th century and the early decades of the 20th.

Edward Long wrote of the indigenous bees of the island in the late 18th century:

WILD BEE.
This is much smaller than the European, and very frequent in all the South-side woods. It is remarkable for having no sting; and is probably the same species so common in Guadaloupe. It builds in the hollow boughs of large trees, particularly the locust, and makes its comb, not with wax, but a composition of gum, and minute particles of tree-bark, worked into a brownish paste, or cement which acquires, in time, the firm texture of papier machée, but thin, and therefore easily broken in the weaker parts.  The cells are pear-shaped, about the size of a bantam’s egg, and filled with a most delicious honey, limpid as crystal, extremely odoriferous, and cordial. These reservoirs hang connected together in clusters, and are so contrived, that each of them has a convenient aperture during the time of work, which is closed, or sealed up, so soon as the measure is full. When the honey is required to be taken out, the cells, or bottles, are to be pierced a little way from the bottom, to avoid draining out the sediment, which is viscid and glutinous.
This honey is gently solutive, the quantity of half a pint generally causing two or three evacuations downwards in as many hours, if taken upon an empty stomach; but, swallowed at meals, it has not this effect. It is, doubtless, applicable to very excellent purposes in medicine; and, as well as the other common honey produced in this island, may be kept for many years in bottles, without running into fermentation like that of Europe. The number of these useful, little insects is greatly diminished by birds and other animals, who constantly prey upon them; but they may be removed, hive and all, into the common apiary, with great safety, where they would be secured under some degree of protection

and of the early Old World bees in the island:

These useful insects were first introduced from England, and have multiplied so well, as to spread innumerable colonies over every part of the island, swarms of them being often found in hollow trees in the woods, in holes of rocks, or banks of earth, and other convenient retreats. Several persons here keep apiaries, which supply them abundantly with honey for family-uses, and wax for candles; and some families burn none other but their own manufacture. The honey is, in general, aromatic, delicious, and, like the Minorcan, always in a fluid state. The honey produced on sugar-plantations is not equal in flavour or quality to what is made in other parts; for the bees, when they can find a constant plenty of melasses in their neighbourhood, will not ramble in quest of flowers, but make use of the ready-prepared syrup. The wax is commonly bleached here in the following manner. It is melted in boiling water over a fire; and, as it floats on the surface, it is taken off in very thin cakes by dipping in a plate. When the whole is taken up in this manner, the cakes are laid in the sun-shine, for two or three days, until the yellow tint is entirely discharged; after which, it is perfectly white, like virgin-wax, and fit for use.

A commodity, so cheaply produced, should excite the inhabitants to extend the number of their apiaries. A moderate industry would furnish them with sufficient for their own consumption; and, in time, with a superfluity for export. It is an article annually remitted from the Carolinas to Great-Britain, and might with equal advantage be established in this island.

Douglas Hall notes the beekeeping activities recorded in the diaries of Thomas Thistlewood in the 1770s, at a time contemporaneous with Edward Long's comments:

p 215:  Here we have Thomas Thistlewood, Esqr., Justice of the Peace, and Lieutenant of the Fort at Savanna la Mar at the top of his fortune and, the usual illnesses apart, at his most comfortable. Within and beyond the parish his horticultural interests and expertise are recognised and his garden has become an attraction to visitors. Nonetheless, he is not resting on accomplishment. In these years he introduces new activities--hives of bees, an indigo patch, and a trial export of annatto.

p 223: After dinner they walked in his garden and: '... perceived a swarm of bees upon a fig tree leaf, but where they should come from God knows. Friday, 7th December: Mr Hayward lent me, An Essay on the Management of Bees, by John Mills, FRS Lond. 1766.'

He soon began to capture swarms of bees and to market honey.

p 232: On the Pen, he was involved in developing one of his more recent enterprises. Mulatto Davie had been hired for some weeks to carry out general repairs, and also to build a bee's house.

p 261: On 1st January, 1779, Thistlewood listed ready money as £184. He had spent more than usual buying provisions; and because of the time spent in logwood cutting and chipping, and in repairs to buildings, his slaves had earned him only £70 for hired labour. Local sales of his Pen's produce had earned him 1352 bitts, or £42 5s. The greatest earnings had come from fruit and vegetables (520 bitts), wildfowl (315 bitts), domestic poultry and eggs (301 bitts), and honey (126 bitts) from a much reduced number of hives. Six of his 16 'stocks' of bees had been lost by vermin, moths, maggots & desertions'.

'bitt' - 'in 1780 the bit was worth 5¼d sterling, but 7½d in local currency'
Dictionary of Jamaican English, Cassidy and Lepage

Letter writers in the Gleaner do some basic calculations: 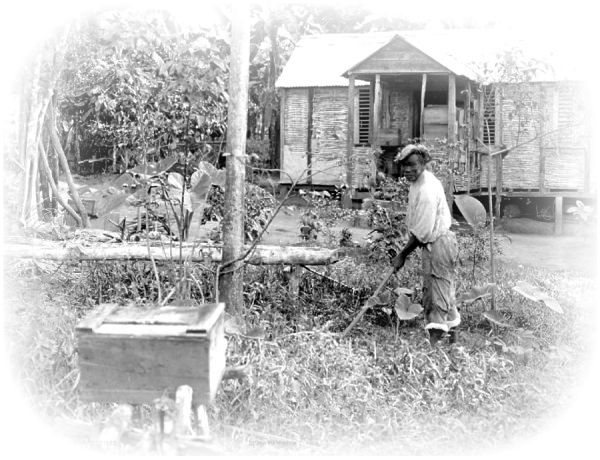 
To the Editor of the Gleaner.
Sir,—Why are bees not more kept? It is a fairly profitable occupation. Both the wax and the honey find a ready sale in the market. And the necessary outlay is of the most limited kind - a few candleboxes, a piece of board, and four stumps to support the apparatus upon. The rest is done by nature.
Daily Gleaner, October 29, 1879

Traditional peasant beekeeping methods
[From Mr. H Scotland's (Jr) paper which appeared in the March 1893 number of the Bulletin of the Botanical Department]

The common plan for removing the honey from the hive is quite barbarous, the bees are made to leave the hive by the use of smoke. Many of them get singed and burnt by the careless way in which the smoke is applied, and the flavour of the honey is spoiled; the combs are then scooped out, without regard to the different grades of honey which a hive always contains. These combs are then placed upon a sieve and chopped up; the product being caught in a receptacle below.

The honey thus obtained is a mixture of bee bread, - of pollen - the juice of young bees (or larvae) and exuviae and excreta, - which if known of by the general public, they would be more careful to ascertain from what source they get their honey. Indeed I have been informed from good authority, that a shipment of honey of this kind was once made from here, and on arrival at its destination it was found to be of such bad quality that it was sold to a firm of blacking manufacturers at the rate of 6d. per gallon. The bees thus deprived of all their honey combs are again returned to the empty hive to get on as best they may.

back to the top