views of Kingston in 1860, as seen by Harper's Monthly:

Harper's Monthly Magazine, Vol. XXII, January 1861, Harper Brothers, New York.
London Standard, April 29, 1862
The papers brought by the West India mail confirm the report of the fire at Jamaica. It occurred on March 29, and laid a large portion of the business part of Kingston in ashes, and destroyed an immense amount of merchandise of all descriptions. The loss is estimated at 200,000/. The catastrophe is sad enough in itself, but it becomes more melancholy and very alarming if it was the work of incendiaries. Such, unfortunately, it appears to have been; for we are told that attempts to fire the city on three different occasions have since been discovered.
other reports appearing in the U.K. press: 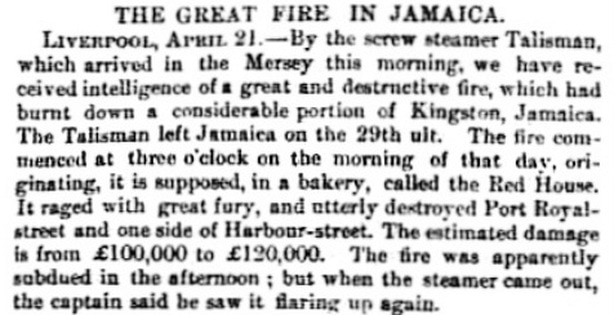 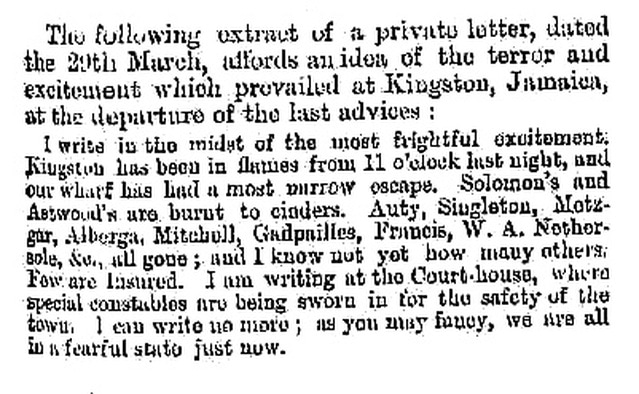 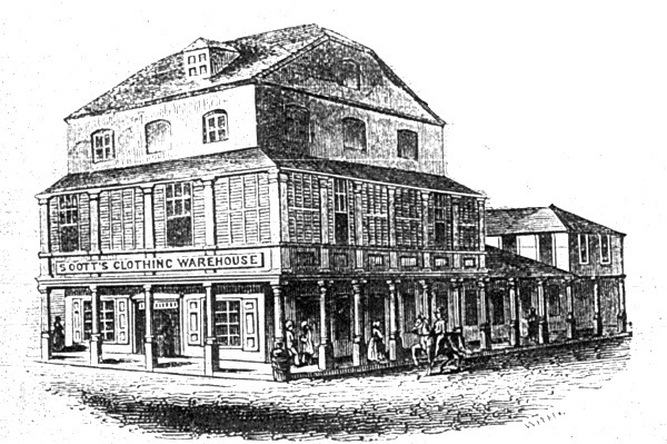 “The Fisher Fire of 1862”
[Text of an Historical Society Broadcast over ZQI (Jamaica Government Broadcasting Station) on 5th November 1947.]

The city of Kingston, laid out after the destruction of Port Royal in 1692, had since then been made desolate by many dreadful visitations, among them Hurricanes, Floods, Earthquakes and Fires and it is with the last of these that we have been dealing in this series.

Originally built mainly of wood, because of the ever-present fear of earthquakes, the city was always vulnerable to fires and has, on at least eight occasions, been seriously damaged by its ravages.
We deal here with the Fire of 1862, which was to become known as “Fisher’s Fire” having occurred in Fisher’s Bakery on Harbour Street. But let us first learn something of conditions in the city at that time. Water was supplied by the Kingston Water Company from reservoirs near Cross Roads but the supply was not constant and would have appeared to have been locked off at the source from 5 p.m. to 7 p.m.[?a.m.] There does not appear to have been an organised Fire Brigade; the fire engines which were located at strategic points throughout the city being operated by volunteer labour when necessary, nor was there an organised Constabulary Force such as we have today.
It was the morning of the 30th March [1862] and at 2 a.m. the city was quiet except for the watch who, on patrol, would call out “two o’clock and all is well”; but on Harbour Street, Fisher’s Bakery was busy heating up the ovens to prepare the bread for Saturday morning and the brisk weekend trade. If the chimneys were foul and adjoining roofs were shingled, it is unlikely that anyone cared. True, a city ordinance required the regular inspection of chimneys arid another bye-law prohibited the lighting of fires between dusk and dawn in the commercial area of the city; but Fisher had been baking bread there for twelve years - a bread which was esteemed throughout the Island and no one had questioned his right to do so. A heavy breeze was blowing from the north and sparks were issuing from the dirty chimneys. Look closer! those sparks have landed on a shingled roof to the south. The roof is dry and in ten minutes, we have the makings of a conflagration which will go down in history as one of the major fires of Kingston.
This fire, in three hours, destroyed all buildings in the section from the southeast corner of Harbour Street and King Street down to the sea and from the southwest corner of Church Street and Harbour Street to the water’s edge. The only buildings remaining in that area being those of Charles Levy and Daniel Finzi on Port Royal Street which were fire-proof and had been recently erected. Among the many buildings destroyed was the vegetable market at the bottom of King Street, which was later to be named “Victoria Market” in honour of Queen Victoria; and many Counting Houses, which in the absence of Banks, carried on the financial transactions of the Island, as well as Rum Stores, Shops, and Wharf premises, which stored vast quantities of the produce of the Island prepared ready for shipment abroad. 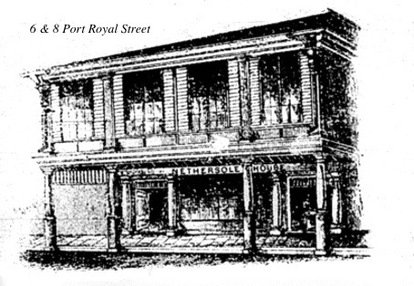 The firms whose premises were destroyed in the fire, will mean little to the present generation; but the names are familiar and many will connect them with ancestors who traded in the city in the 1860’s, Here a few - Nethersole and Nephew; Gadpaille who ran the Commercial Hotel; A. DeCordova and Company’s Rum Store; Charles Levy and Company’s Rum Store; J. Cespedes; Alberga and Mitchell; F. [          ] and Company; J Singleton; Isaac Lawton the proprietor of the Tribune, the printing plant of which was destroyed but was fortunately replaced in less than one month by equipment obtained from New York; David Quallo; Thomas Brown; J. [     ]; J.C. DeLeon’s Rum Shop; [            ]; J. Young; A. Lyon; Henry Delgado’s two shops; John Hart’s Wharf and Counting House; Andrew Hart; George Solomon and Company’s Counting House and Wharf; W.G. Astwood and Company, and very many others.
The dense smoke hung like a pall over the city and lit up by the flames the awe-inspiring spectacle, which was observed from many distant parts of the Island. Lieutenant Governor Eyre and his wife hurried from Spanish Town and immediately set up a commission to investigate into the cause of the fire. Dr. Bowerbank, whose statue is on the northern side of the Parade, was appointed chairman and it included Edward Jordon, A.G. Fyfe, Captain Cooper of the Royal Navy at Port Royal, John Bicknell, H.P. Colthirst, William Barclay and Mr. A.C. Sinclair, later, Superintendent of the Government Printing Office.
The Commission offered a reward of £50 for information which would assist in determining the cause of the fire and their findings, released two months later, gave facts from which this Broadcast has been prepared through the courtesy of the Institute of Jamaica’s West India Reference Library, where it has been consulted. This report set out the laxity which had permitted Fisher to operate a bakery in a prohibited area, and at night. They chastised the civic authorities for not having inspected Fisher’s chimney, though the authorities might well have felt that as baking in that area was prohibited, Fisher could not have a chimney and the necessity for its inspection could not therefore arise. They censored the Water Company for failing to turn on the water when notified by runner of the fire which was raging in Kingston and they animadverted upon the apathy of citizens who had failed to render assistance in fighting the fire, although they had enthusiastically assisted in the removal of stores from endangered premises.
Their recommendations, if carried out, would have spared the city much damage from major fires which occurred in later years through the negligence of civic authorities and the absence of equipment with which to combat fires. Be that as it may, their findings were sound, as among other things, they recommended the establishment of a permanent and paid constabulary to replace “the watch” and whose functions would be to guard and protect the city and by their vigilance, give ample warning of danger. They advocated the setting up of a permanent Fire Brigade 4th a personnel, whose duties would be to care for the fire fighting equipment and be constantly on call in case of fire and they also advocated the erection of many plugs (as the old fire hydrants were called) which would have water constantly under pressure for use when required.
If the apathy of the population be considered indicative of a lack of civic responsibility, a more unfortunate aspect would be the flood of incendiarism which followed on Fisher’s Fire. Indeed, it would seem that whenever a major fire has occurred in the city, there have been depraved creatures, who found awful pleasure in either circulating alarms of fire or actually setting fire to buildings in the area. This was particularly noticeable after Feurtado’s Fire of 1882; but more so after Fisher’s Fire, which has just been described. Indeed, in the three months which followed, there were no less than forty alarms throughout the city and the adjoining parishes, many of which assumed serious proportions and might have involved larger areas had not the public then become conscious of their duty to the area in which they resided.
It is not the duty of the student of history to point a moral nor indeed to adorn the tale. The facts, as they are obtained from printed and manuscript sources, are generally sufficient to justify the presentation of the material in a form such as this; but it might be permissible at the close of this series, where an attempt has been made to trace the origin and course of many great fires of Kingston, to indicate similarities which cannot be attributed to mere coincidence and which have been observed not only from the four disasters included in this series, but the eight, which have been more or less carefully studied. The most important similarity is that the majority of these fires happened near the sea to the southeast and occurring in the day, were generally fanned by a stiff sea breeze to spread ruin and destruction in an angular path which widened as the distance from its apex increased and generally seems to have burnt itself out against the open space afforded by the Victoria Park. That many of these conflagrations would have been avoided or could not possibly have spread, if fireproof roofs were compulsory in the area, is unquestionable; but many buildings in the eastern section of Kingston’s commercial area are still shingled and as long as this is so, we cannot ignore the danger to the city which exists from a fire occurring at midday in an area say near Breezy Castle with a strong sea breeze blowing and it might be well to consider the installation of a small unit of the Fire Department in that area along with the maintenance of as many open areas or parks as possible in the city.
items from the Jamaican press, quoted in U.K. newspapers:
some Jamaicans in 1860, as seen by Harper's Monthly: