Jamaica's history - always something new to find out!
John Leopold King, another of the pre-World War I generation of barristers, was born on March 8, 1870, in Gayle, St Mary, the son of Mr and Mrs J. W. King. He was educated at Mount Angus Day School, and at the Calabar Day School when T. B. Stephenson was the headmaster; he remained there as a Pupil Teacher for two years before entering Mico College. After successfully completing his course at Mico he became the master of Whitefield Boys’ School in Porus. He later taught at Mannings School, Mico College and Titchfield, before deciding to leave the teaching profession. During and between teaching posts he continued his studies locally, obtaining scholarships to the University College at Hope, which functioned between 1889 and 1903. He passed the intermediate and final examinations for the London University B.A. degree, and in 1902 spent several months on leave from Mico, in England, Scotland and France continuing his studies, and observing schools and their work.
In 1907 he went to London to pursue his ambition to become a barrister. He worked for the London University LLB which he passed in 1909, and completed his bar examinations at Gray’s Inn in January 1910. He was called to the bar in London, and admitted to the Jamaican bar when he returned to the island in June 1910.
Although he left teaching, he remained concerned with education. He had been President of the Jamaica Teachers’ Association in 1903, and was made an honorary member. He edited the ‘Jamaica Teacher’ and was a member, and later chairman of the Teachers’ Mutual Aid Society. He served on the Cambridge Local Examinations Committee, the Wolmer’s Trust and the Kingston School Board.

In 1910 he made a brief excursion into journalism as the literary editor of the Daily News, which lasted barely a year in 1910-11.

In 1912 King was elected to the City Council of Kingston, and served on that body throughout the 1914-18 war, during which time general elections were suspended. When elections were held once again, in June 1921, he was not a candidate.

Although King built a solid reputation as a defence lawyer, he did on occasions appear for the prosecution, In 1922 he was appointed acting Resident Magistrate for Clarendon, a post which he held until mid-1925. 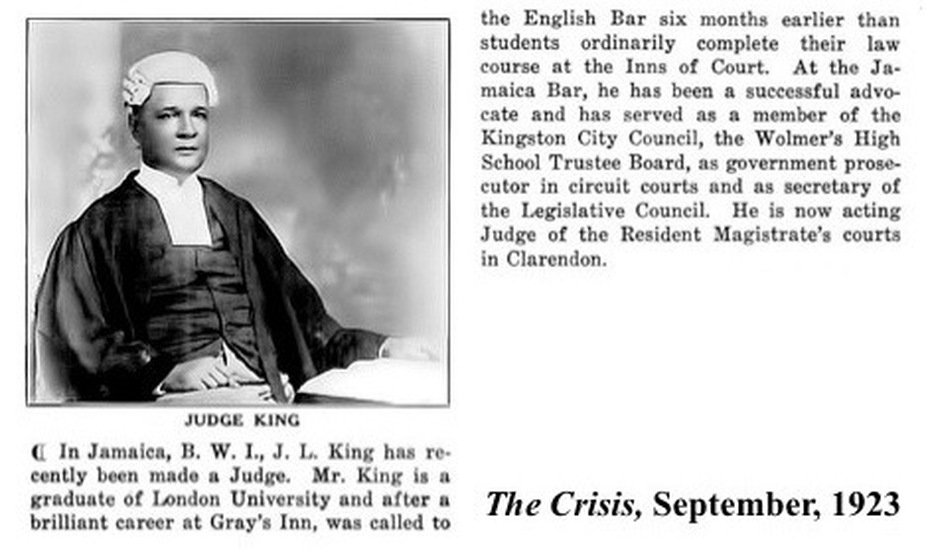