Jamaica's history - always something new to find out!
politics and public affairs

One of the most telling anecdotes told of C. P. Lazarus was this, as recorded in:
Jamaica Pie, being Tales of Past and Present,
by J B, Gleaner Co., 1943
Chapter XI Scintillae Curiae, pp 25-6
Scene. Court. On the Bench - The C[hief] J[ustice] [Sir Adam Gibb Ellis]
Registrar. "Call Charles Lazarus."
Policeman (to the corridor) " Charles Lazarus, Charles Lazarus, Charles Lazarus." (to the air) "Answer."
Enter Mr. Charles Lazarus, an ironfounder, in a good way of business. He wears a working man's blue overalls. He enters the witness box, is sworn, and gives evidence. Evidence ended, he prepares to leave the box.
C.J. "Mr. Lazarus."
C.L. (turning to Court) "Yes, your Honour."
C.J. "I observe, Mr. Lazarus, that you have not deemed it proper to put off your working clothes before coming to this Court."
C.L. (staring hard at the C.J.'s robes, and assuming an air of surprise and injured innocence) "I beg the court's pardon, but I see that your Honour is in his working clothes too."
(Sensation in Court.
But the C.J., being a very wise man, understands).
C.J. "Yes, I see. Thank you, Mr. Lazarus."

In her book on Devon House, Enid Shields comments thus on Lazarus -   "In spite of all his achievements, Charles [Lazarus] was a rough diamond, but most amusing. Most anecdotes that are allegedly connected with Lazarus are unprintable."
She adds this
"Another delightful anecdote relates that Lazarus once sent the British government a bill for repairs on a naval ship: ‘One stud - 6 pence. Total amount for fitting above stud - 3 shillings. Total amount for knowing where to fit stud - £960.’ "

'Upon the reception of a despatch from Lord Derby, which did not promise to the people under the new constitution all the liberty of government which they sought, especially in questions of finance, there were numerous private and public meetings held in several parts of the island, and protests made against accepting anything less than a "definite, substantial and effective control over the financial affairs of the country." At a public meeting in Kingston a resolution was passed, protesting among other matters that "the governor's presence and power in the council has been in the past and will be in the future, unduly restrictive of the freedom of debate." '

1885 - the first local government elections since the Morant Bay 'Rebellion' in 1865 had led to the suspension of even limited representative government: ﻿[Jamaican﻿ constitutional developments] 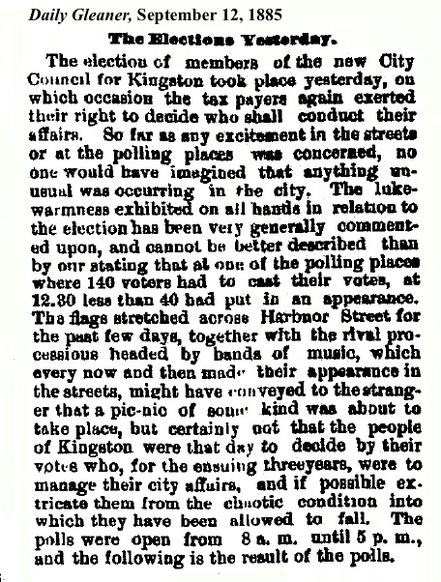