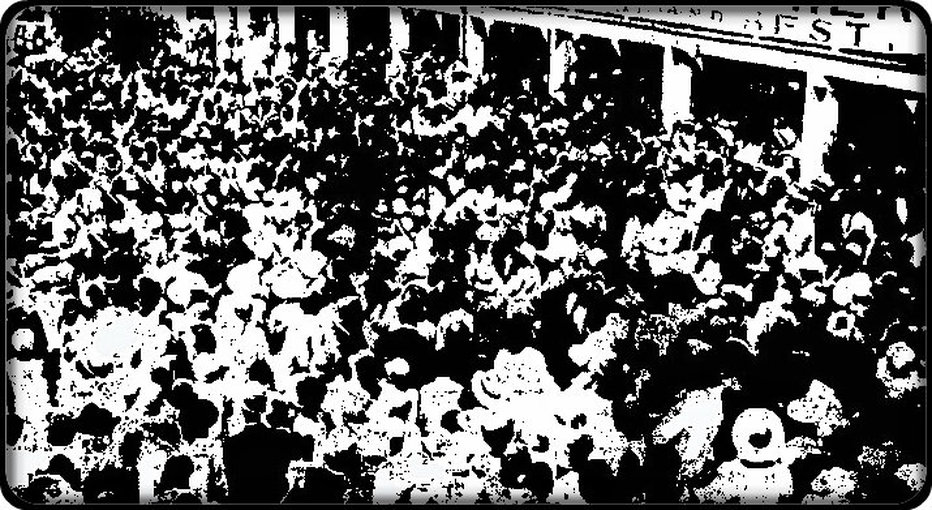 . . . part of the crowd at the Exhibition, Children's Day, September 23, 1932
In an editorial at the start of the 1932 Exhibition the Gleaner described
. . . a small group of private persons who had conceived the idea of a Jamaica Fair and had brought it to the birth. The assistance they received from the Government or members of the public was infinitesimal; such success as they have achieved is due entirely to their own initiative, to their faith and courage - perhaps it would be more correct to say to their astonishing audacity.

So these Exhibitions, in 1932 and 1934, were the achievement of ordinary Jamaicans - 'Jamaica artizans and men of the superior working class' - who 'have not only shown initiative; they have proved themselves capable of achieving success.'

Members of the Deputation of the Board of the All-Jamaica Trade Exhibition and Fair, who waited on His Excellency the Acting Governor at King's House on Friday last and discussed with him matters in connection with the exhibition which will be held from the 19th to the 24th of the present month at the Kingston Race Course.
Daily Gleaner, September 6, 1932

The idea of holding an exhibition of locally produced goods seems, in part at least, to have originated with an organisation called the Native Traders Protective Association which was founded in mid-1929; T. H. Beecher was described in November '29 as founder of the Association, though the President was Ivan G. Aarons. In November also it was reported: - 'It is understood that the society intends to hold an exhibition towards the middle of January when exhibits from all over the Island will be on show.' 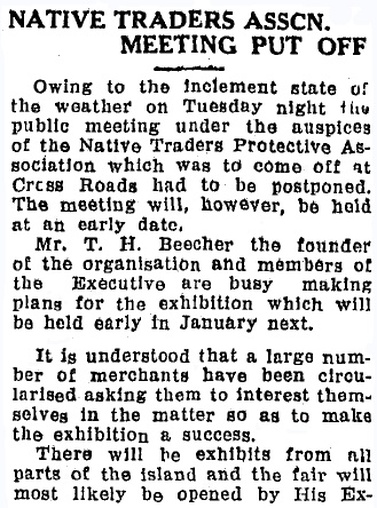 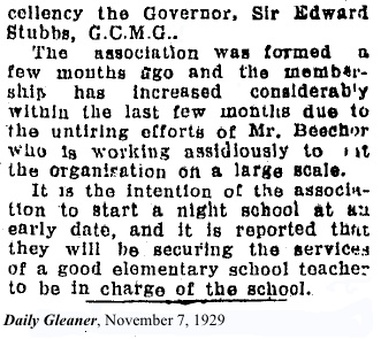 However, no exhibition took place in January 1930, and the Native Traders Protective Association seems to have petered out in 1930. However, T. H. Beecher continued to work on the idea, but did not get an exhibition organised until 1932. There were other suggestions for an exhibition, especially an Inter-Colonial Exhibition, during these years, but only Beecher and his associates actually got the idea off the ground.
[Note: the name of the Native Traders Protective Association points to an issue much debated at the time - the role of the Chinese, 'East Indians' and 'Syrians' in commercial life in Jamaica. There was much, often heated, writing in the press on the topic and on the need to protect 'native traders' against competition from 'alien traders'. This is a big topic and cannot be looked at here; I will say however that T. H. Beecher does not seem to have expressed any animosity to 'alien traders' in his campaign for a Jamaican Industrial Trade Exhibition.]

Dunbar Theophilus Wint, Member of the Legislative Council for St. Ann, was a keen promoter in the late 1920s of the idea of having an exhibition in Jamaica; he was an advocate of a federation of British West Indian colonies, and his exhibition proposal was for an Inter-Colonial Exhibition, as will be seen in the reports below.

'. . . the Committee appointed to enquire into the advisability or otherwise to the holding of an Exhibition in Jamaica.'
Daily Gleaner, March 10, 1930

THE PROPOSED EXHIBITION IN JAMAICA

Committee Appointed By The Governor to Enquire Into The Suggestion.

A letter from a puzzled reader, published in the Daily Gleaner, November 2, 1931 -

By August 1931 Beecher had apparently been able to rally enough backing to be able to start making genuine plans for an Exhibition in early 1932.

The first planning meeting for the All Island Native  Exhibition scheduled for the early months of 1932 had been held on Sunday, August 23, 1931, at 142 Orange Street, where Beecher had been carrying on a grocery business, and a Board of Directors was elected.
Daily Gleaner, August 25, 1931
ARRANGEMENTS FOR ALL ISLAND EXHIBITION
Board Elected To Carry Out Plans For Fair To Be Held Next Year.
To Foster Development Of Industry And To Help Unemployment. 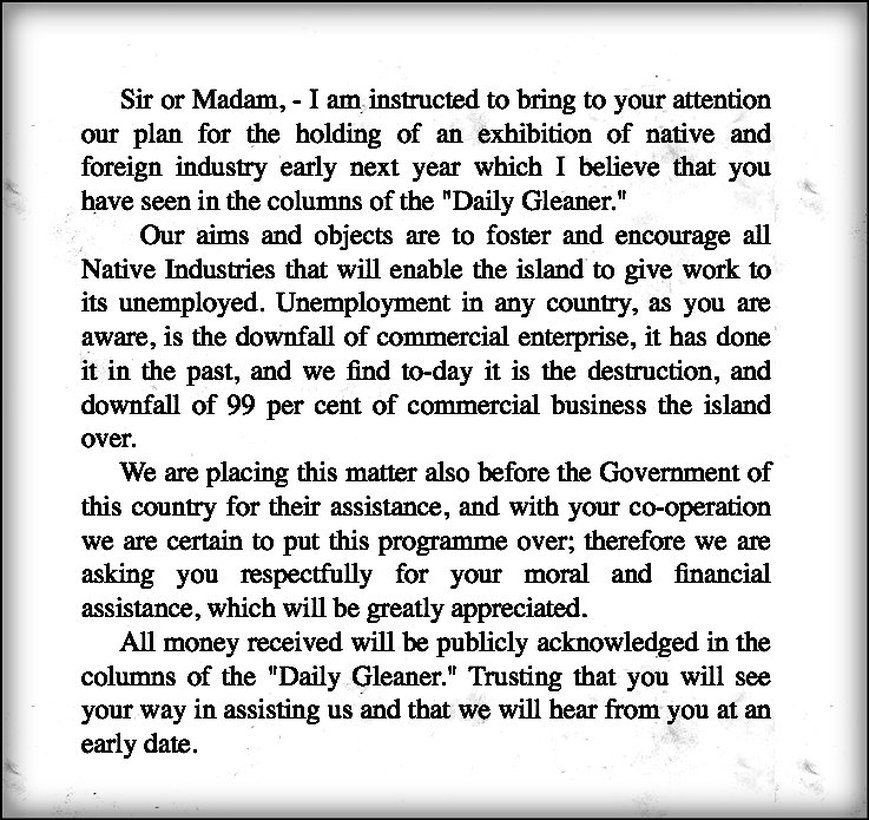 'The following circular was recently sent out to hundreds of prominent ladies and gentlemen in the island' August 31, 1931
. . . . and the second meeting:
Daily Gleaner, Thursday, September 3, 1931
ISLAND NATIVE EXHIBITION IN COMING YEAR
Meeting Of Committee Hears Of Promises Of Support For The Venture.
CIRCULAR ISSUED.
Hard Work Before Them, But Organiser Thinks That Success Is Assured.
A meeting of the committee in connection with the All Island Native Exhibition which will be held early in the coming year, was held on Monday night last at the temporary office of the committee at 142 Orange Street.
Mr. S. A, McFarlane presided, and among those present were Mr. Theophilus H. Beecher (the organiser), Messrs.T. A. Aikman, D. Williams, A. R. A. Levy, G. R. Bowen and Ford; Mrs. Stewart, Mrs. Lewis, and Mr. W. M. Mitchell, Secretary.
Mr. Beecher reported that he had written to the Managing Director of the Gleaner Company, Ltd., asking him to receive subscriptions on behalf of the committee. He had also had an interview with Mr. H. G. deLisser, the Editor of the Gleaner and had promised Mr. deLisser to furnish him with Information concerning the Show. Since the last meeting he had been visiting several well-known merchants and others trying to get their co-operation in the movement and he was pleased to report that the gentlemen were in sympathy with the Show and promised to give their assistance morally and financially.
The task before them was a big  one but with hard work they would be
able to succeed, and he was certain that the venture would prove a success. He hoped that the members of the committee would work together harmoniously, so that they could achieve the success which they were aiming at. He was delighted to see there that evening Mrs. Stewart, an energetic worker, who had accepted the committee's invitation to assist in the movement.
Mrs. Stewart, who is in charge of the Ladies' Working Committee, reported that she had interviewed a few ladies, who had promised to give their support.
Mr. Beecher said that he and the Secretary had interviewed several prominent members of the Chinese community and had also had a talk with the Secretary of the Chinese Club. The Secretary of the Club had promised to give them assistance, and they were going to send him the prospectus in a short time.
CANADIAN VISITORS
The Secretary informed the meeting that a few days ago three Canadian visitors called at the office and had a talk with him with regard to the exhibition. The visitors said that the movement was a splendid one and was one which was out to build [an exhibition?], and that a better move could not have been initiated. They also promised to assist in the decorations, as they were familiar with exhibitions.
Mr. Beecher said that that was very encouraging and he hoped the members of the committee would work with renewed vigour after hearing the statement of the Secretary. They wanted the public to take a keen interest in the exhibition and to give it their genuine support. He would like to mention that the head of one of the biggest firms in Kingston had written to the Secretary asking for more information regarding the exhibition. The information had been given to the firm, and he believed that that firm was going to assist them in their undertaking.
It was decided to hold a public meeting at the Ward Theatre on the evening of the 20th. instant, when several prominent men will be invited to express their views.
Mr. Beecher said that he was hoping to have either the Hon. Altamont E. DaCosta, Custos of Kingston, or the Hon. George Seymour Seymour, member for St. Andrew to preside. He was hoping that the prospectus would be issued within the next few days.
After dealing with other matters the meeting adjourned.

At the next meeting two important decisions were made about the name and length of the Exhibition:

In mid-September Mr. Beecher was declared bankrupt, and, after this, meetings about the Exhibition were no longer held at 142 Orange Street. 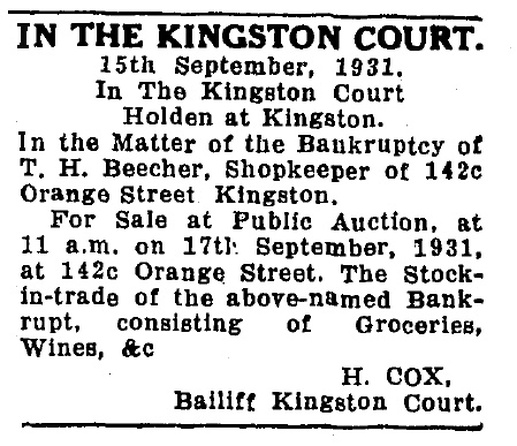