Jamaica's history - always something new to find out!
Her desire to be active in mission work developed as early as the age of 12. She became a good student of the Bible, and delighted in teaching it. In 1895 the Bishop of Sierra Leone visited Jamaica and appealed for missionaries of African ancestry to go to West Africa from Jamaica. In 1896 Isabel married William Burris, who had been studying for mission work, and together they travelled to West Africa.
William Burris was ordained deacon in Sierra Leone in 1899, and priest in 1902. At first he was curate at St George's Cathedral, Freetown, but in 1901 he was put in charge of the Anglican mission in the Rio Pongas, an area adjacent to Sierra Leone which was claimed by the French. He was accompanied by his wife, and A F O March and J Walrond; they were the first contingent of Anglican missionaries from Jamaica to West Africa.

The Rev and Mrs Burris worked indefatigably to spread the Gospel. Their reports of their work were printed in the local press and in 1910 they returned on furlough and toured Jamaica giving talks about their work and the needs of the mission. Sadly, shortly after they left, Isabel's brother John, who was practising as a doctor in St Mary, was washed away and drowned by a flooded river while returning from visiting a patient at Albion Mountain.
The Rev and Mrs Burris ran the mission in the Rio Pongas until 1925, when they returned to Jamaica. They had hoped and believed they would return to their missionary work, but the church apparently decided, possibly for financial reasons, that they should stay in Jamaica. After a few years serving at Mount James and Scotts Hall, they were sent to Pratville in Manchester, where Father Burris served with enthusiasm and success until his retirement in 1938, when they came to live in Kingston on Lady Musgrave Road. He still preached and took services, as he was popular and widely respected. In the summer of 1940 he was one of the clergy officiating at the mass wedding organized by the Women's Liberal Club. William Burris died in October of that year, and was buried in the St Andrew Parish Church cemetery. A letter in the Gleaner said of him 'He was not a priest for salary, but a priest for service.' 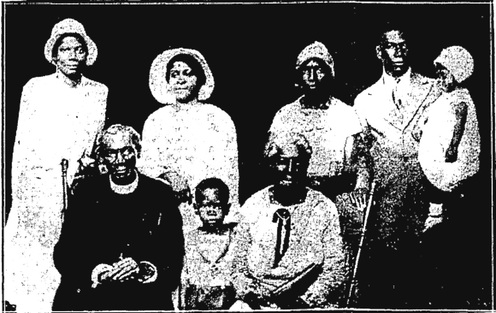 The Burris family, 1932
Isabel Burris, who had worked beside her husband in the West African mission they loved, continued to work beside him on their return to Jamaica. She was always a well-received speaker, especially when talking about the mission. When the Bishop of Gambia visited Kingston in 1954 he made a special point of visiting the veteran missionary, then approaching 90, at her home. She died in May of the following year.