'During the eight and twenty years of his connection with it, the school provided an education which at the time was nowhere else to be had in the island. From every parish boys came to it to receive a grammar school education on the lines generally of the Academy at Belfast. His chief assistants were from the North of Scotland, where thoroughness was a distinguishing mark of all grammar school work.The "old Collegiate boys" have shown by their subsequent careers  in life, that the Collegiate did much for them. They are to be found now in many parts of the world, in all the professions, and engaged in all forms of business. If even those only that are still alive and in Jamaica could be got together, and were to stand up in presence of the largest assembly that could be convened in one building, "the old boys," would tell in an effective manner what one good school could do in thirty years to provide a country with men to do its hardest and most difficult work.'
Rev. William Gillies, Journal of the Institute of Jamaica, 1895

Jacob Cohen Stines was a pupil at the Collegiate School in the 1850s, before the headmastership of William Morrison.
I have not been able to establish much about the career of J C Stines; I hope someone can help with more information.
The Stines were an Ashkenazi Jewish family who are mentioned in Jamaican records as early as 1809. The Stines also appear in synagogue records as office holders. J C Stines' father, Joseph, was a prominent auctioneer.  There are a few references to J C Stines as a lawyer in Jamaica, but references found on the Internet indicate that he left the island in 1876, and continued his career in the USA, possibly still practising as late as 1903.
Daily Gleaner, December 28, 1866 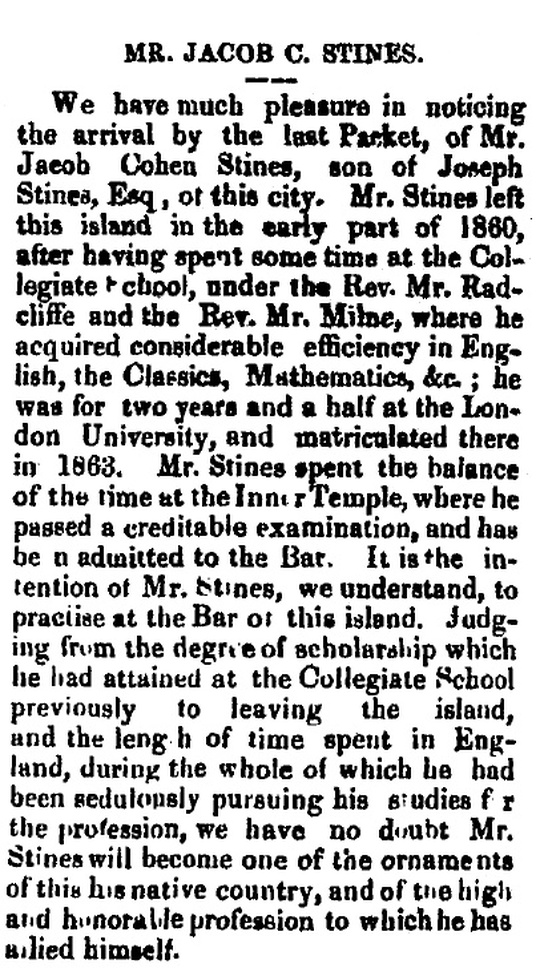 the items below suggest that the Gleaner may have got the wrong Inn - it seems that Stines was called to the bar at the Middle not the Inner Temple
The Law magazine and law review: or, quarterly journal of jurisprudence, Volume 22
William S. Hein & Company, Butterworths, 1867
p 360
CALLS TO THE BAR
Michaelmas Term 1866
Middle Temple. -  Jacob Cohen Stines, Esq.;

Men-at-the-bar: a biographical hand-list of the members of the various Inns of court: including Her Majesty's judges, etc
Joseph Foster, Reeves and Turner, 1885 - 528 pages
Stines, Jacob Cohen, matric. London Univ. 1862, practices before the supreme court of Jamaica, a student of the Middle Temple 3 Nov., 1862, called to the bar 17 Nov., 1866 (eldest son of Joseph Cohen Stines, of Kingston, Jamaica, merchant); born Kingston, Jamaica
​      The Rev Canon Thomas Harty, who was born in Falmouth in 1843, is  an another example of an early pupil of the Collegiate School who went on to a career of usefulness and service to the people of Jamaica.
'He began life as a schoolmaster in the school where he was as a pupil, a school that has turned out some of Jamaica's greatest men, the Collegiate ot Kingston.' (Gleaner, March 13, 1917)
[He] was made a deacon in 1866 and a priest in 1867, and a Canon of the Cathedral in 1899. He ministered during his career at Golden Grove, Annotto Bay, Brown's Town,Port Antonio, Harewood, and finally at St. Matthew's Allman Town, Kingston, where he died on March 2nd. From 1905 he had been Organizing Secretary of the Jamaica Missionary Society. (Who's Who in Jamaica, Obituaries for 1917)
Letters of administration were granted in the estate of the late Rev. Canon Harty deceased. The personalty was sworn at £ 713. There was no realty. (Gleaner, April 14, 1917)

A list of alumni so far identified:
(more information is (will be!) available by clicking on underlined names)