Jamaica's history - always something new to find out!
Daily Gleaner,  February 26, 1898
An Academy for the training of schoolmasters and catechists was began at Bonham Spring in 1841, with Mr. George Miller as tutor. Through the good offices of the proprietor these premises were occupied. rent free, until 1852, when the institution was removed to Montego Bay and continued for long years to occupy the foremost place in this island in the thoroughness of the education supplied. One remark of the editor of a local paper put in evidence is a sufficient attestation of the proficiency of the seminary. Speaking of a recent examination he says : "Without detailing any of the peculiar excellencies of the plan of teaching which these exercises disclosed it is sufficient to say that indubitable evidence was presented to the mind of every observe: that the system pursued is highly calculated to inculcate first principles and to lay a solid foundation in all the departments of learning."
Others are doctors, lawyers, planters, penkeepers, merchants, engineers, or are in the Customs service or in other public offices. Among the ministers may be named the Rev H Sharpe, Rector of the Parish Church, Montego Bay, the Rev. T. M. Geddes, Coke Chapel Kingston, and the Rev. T.C. Hutchings, St. James. Over one hundred "missionary students," that is without charge to themselves or parents or guardians, were sent out by the Academy, most of them becoming teachers of day-schools. In this way through its missionary students and its "public scholars," as they were called in its annual reports, the Academy made in its time a large contribution to the higher education of the island.

Bonham Spring was the first location of the  Presbyterian Academy.
In a letter to Andrew Fyfe, Esq., *S.S.C., Nov. 24th, 1840,  REV. WILLIAM JAMESON wrote :
*SSC - probably stands for Synod Standing Committee?
Note: The Rev William Jameson was a Scottish Presbyterian missionary who arrived at Montego Bay in January 1837; he later served briefly in West Africa at Old Calabar in 1847, where he died in the August of that year. 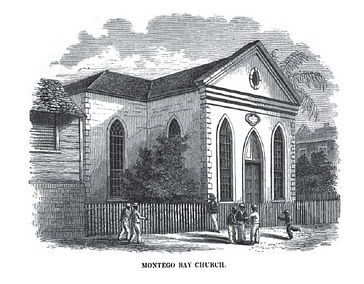 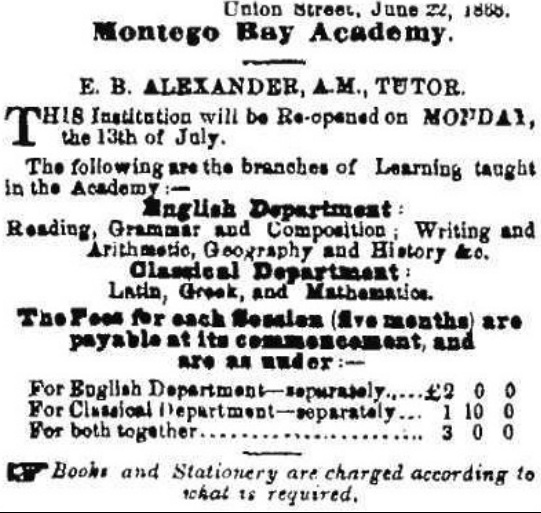 Afterwards, the story of the Montego Bay Academy splits in two; there is the story of the Theological Hall which continued to exist, in other form, elsewhere, and there is the other story, of the provision of a secondary school for the boys of Montego Bay.
Cornwall College
Historical Cornwall College, a schoolboy’s dream
By The Western Sleuth, The Western Mirror, Saturday January 21, 2006

In 1895, a Presbyterian Minister, Rev Adam Thompson and a government representative for St. James and Trelawny, Hon. John Kerr, petitioned the government to allocate 500 pounds for secondary education in Montego Bay.
Hence, in 1896, the second city gave birth to Cornwall College which was at that time located on Barracks Road (site of the Public Works Office) and was called Montego Bay Government Secondary School.
Mr. E. Lockett, B.A., was named the first headmaster and he served until 1903. He was succeeded by Anglican priest, Rev. George Hibbert Leader in 1904. He served some 19 years at the institution which ran into difficulties due to lack of space in the classrooms. It was then that the Hon D. A. Corinaldi stepped in and used his status to procure 2,500 pounds from the government in 1909 to assist in the provision of a new school site.
Between 1910 and 1911, 34 acres of land were bought at the Pleasant Hill Estate where the institution was constructed. The school was officially opened at its new location in 1911 by the then Governor of Jamaica, Sir Sidney Olivier. In 1922, Montego Bay Government Secondary School became a name of the past and the large, beautiful institution was renamed Cornwall College.