The Nautical Magazine: A Journal of Papers on Subjects Connected with Maritime Affairs, Volume 6, 1837 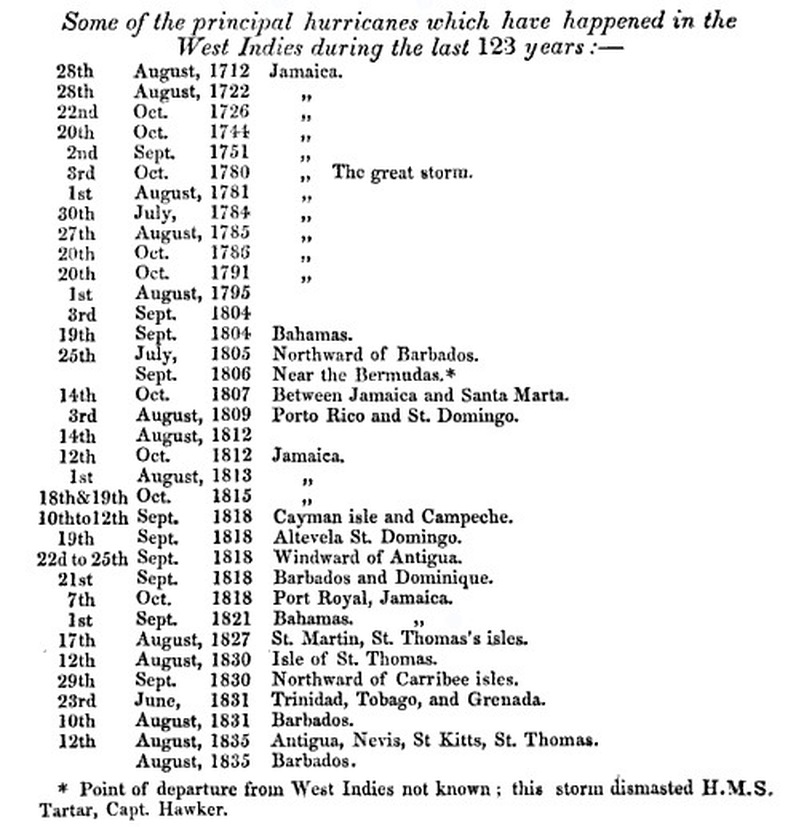 1712 The hurricane of August 28 is described as 'the first great hurricane experienced by the English in Jamaica', but no accounts of it appear to have survived; I have been checking that out!

'On August 28, 1712, Jamaica was struck by one of the most powerful hurricanes in its history.’
The Republic of Pirates, Colin Woodard, 2008

[Colin Woodward gives this brief account in his book.] 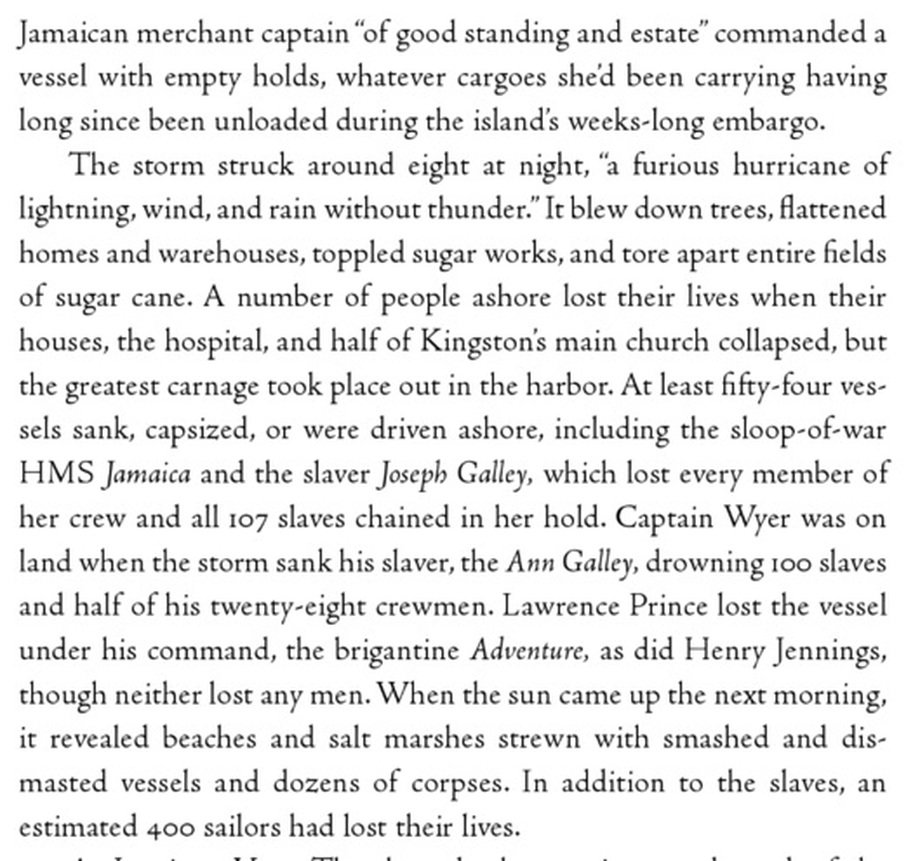 I  found this brief reference in John Oldmixon's The British Empire in North America, from 1741 - 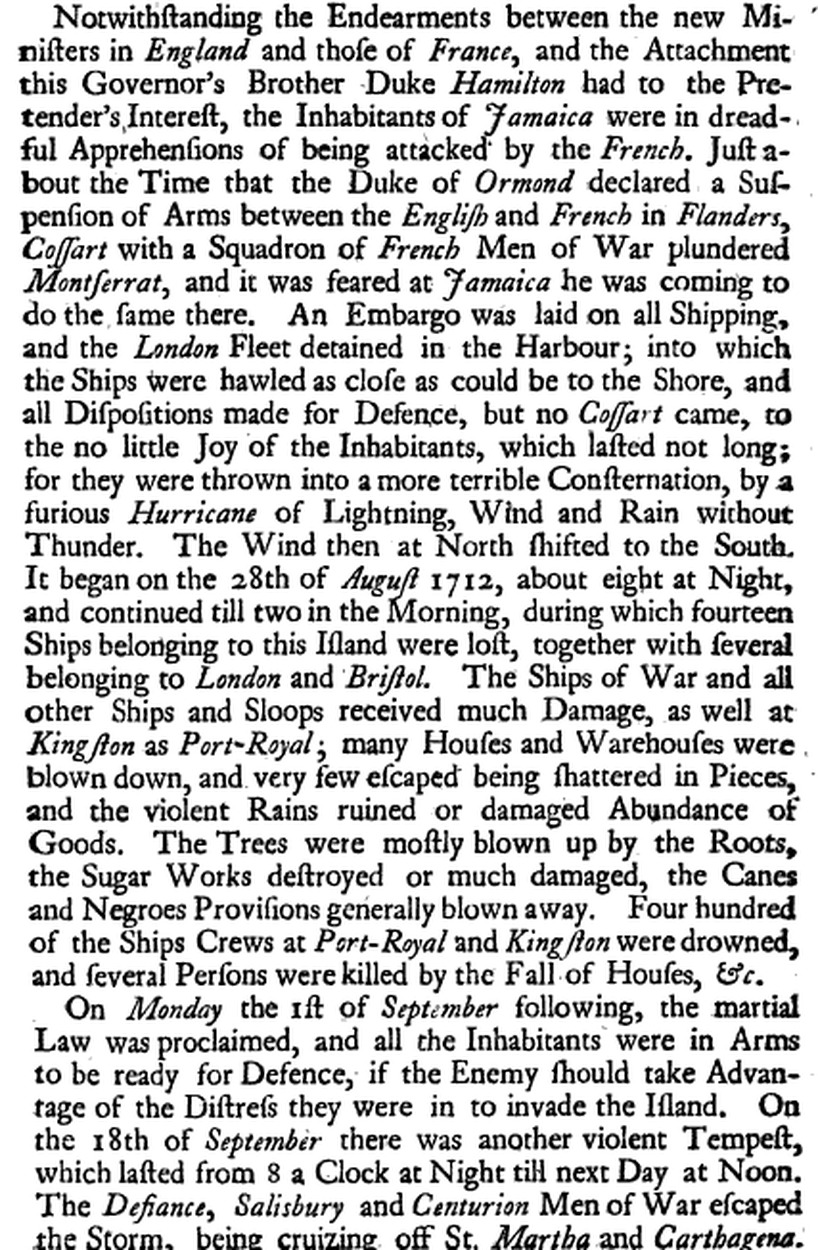 'As great as was this Storm, that which happened here 10 Years after was much greater.'

The British Empire in America: Containing the History of the Discovery, Settlement, Progress and State of the British Colonies on the Continent and Islands of America. ... Second Edition, Corrected and Amended.
Mr. Oldmixon (John) London, 1741
Thomas Coke, the great Methodist after whom Coke Chapel is named, gave a devastating account of the fate of Sav-la-Mar in the 1712 hurricane -
note, page 305
Savanna la Mar was a small seaport, situated towards the western part of the island, in the parish of Westmoreland. In the tremendous hurricane which nearly desolated Jamaica in the year 1712, this town received its mournful fate.

The sea, agitated to a degree that astonishes,   forsook its ancient bounds; and being driven by the tempest upon the land, overwhelmed the town and its inhabitants, and in a few painful moments swept both man and beast from the face of the earth. A destruction so sudden could create little or no alarm till all was past. Not an individual survived to relate the calamity, or to mourn over his departed friends. Not a single habitation escaped the deluge; the town, with its inhabitants and wealth, was, in the most literal sense of the word, completely washed away.
A History of the West Indies: Containing the Natural, Civil, and Ecclesiastical History of Each Island; with an Account of the Missions Instituted in Those Islands, from the Commencement of Their Civilization, But More Especially of the Missions which Have Been Established in that Archipelago by the Society Late in Connexion with the Rev. John Wesley, Volume 1
Thomas Coke, 1808

Four Years' Residence in the West Indies: During the Years 1826-9, Frederic William Naylor Bayley, 1833
1722 '. . . a violent hurricane, which happened on the 28th of August, 1722. It began at eight in the morning, and lasted fourteen hours ; during which, the rain was incessant, and the storm veered all round the compass. In Kingston most of the buildings were thrown down, or much shattered. The very day preceding it was perfectly calm; but so great a swell at sea, that the waves broke over the breast-work at Port Royal and laid all the streets under water. The fort suffered very much; several of the guns were dismounted, and some washed into the sea. The church and row of houses in the East part of the town were so battered, that there remained very little ap­pearance of a building. In short, above half the town was laid in ruins ; and the houses and plantations in all parts of the island suffered considerable damage, except in St. Jago, where the Spanish buildings stood the shock unhurt. Very few of the inhabitants lost their lives; but in the harbour it proved more fatal. Out of thirty-six merchant-ships and sloops, only ten were to be seen after the storm; and of these one half were irreparably damaged. The Falkland, Swallow, and Weymouth men of war, and the sloop Happy, lost all their masts and boats; the other part of the squa­dron, consisting of the Lancaster, Mermaid, and Adventure, were luckily at sea, and escaped. The naval store-house was blown down; and most of the powder in the magazines damaged. The Rio Cobre was obstructed for several miles about the Caymanas, and lost its usual channel, by the prodigious abundance of trees and rubbish which the wind and inundation had thrown into it; so that the passage from St. Jago to Kingston by land became interrupted for some time; and the assembly were obliged to pass an act for clearing it. It was computed, that four hundred persons lost their lives in the harbour, among which were two hundred Negroe slaves on board a Guiney ship, which foundered at her anchors.'

1726 October 22: A hurricane swept the east end of the island, lasting three hours and a half. It blew down many houses in Kingston, Spanish Town and Port Royal, and sank or wrecked fifty ships. 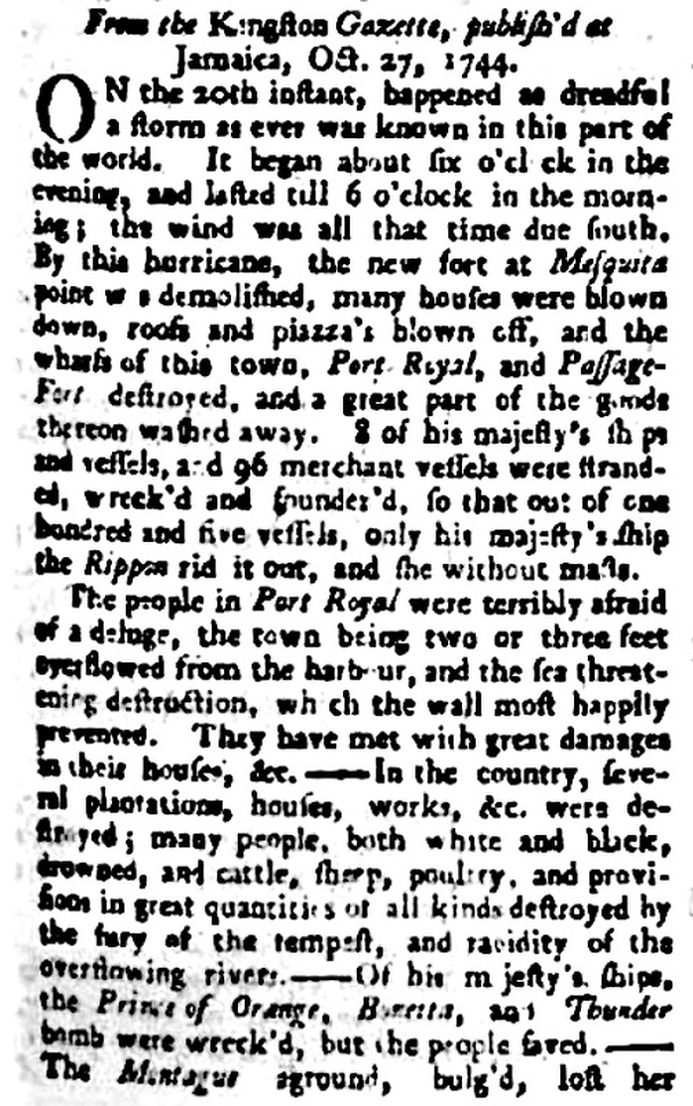 '. . . in the year 1744, when another furious hurricane arose at six in the evening on the 20th of October, and continued till six the following morning. A new fort, begun at Mosquito Point, was entirely razed; many houses were blown down in the towns and other parts of the island; and all the wharfs at Port Royal, Kingston, Passage Fort, and Old Harbour, were destroyed, and most of the goods swept away. The inhabitants of Port Royal expected every moment to be swallowed up by an inundation, the streets being all laid several feet under water; but, their wall withstood the shock, and saved them from utter ruin. Their dangerous situation may be imagined; for the wind, setting the whole time from the South, drove the surge full against this part of the town, and with such fury, that immense loads of stone and sand were poured over the wall. Sir Chaloner Ogle, who then had the command on this station, was fortunately at sea, with the major part of the fleet; but there were nine men of war and ninety-six merchant ships in the harbour, one hundred and four of which were stranded, wrecked, or foundered; so that only Rippon rode it out with the loss of her masts; and a great number mariners were drowned. Thus has this unhappy town undergone, in the space of fifty-two years, a sad succession of extraordinary disasters, by earthquake, tempest, fire, and inundation. In its present humbled condition, it has three streets, two or three lanes, and about two hundred houses.'
History of Jamaica, Edward Long, 1774, Vol. II, p 146

It was reported that an earthquake shock occurred during the hurricane, but this is a phenomenon which needs further research. It was also recorded that 'a pestilence' followed the hurricane, causing a greater number of deaths.

1751 September 2 A storm is recorded in the Jamaica Almanac.
1772  A hurricane 'which happened on the 31st of August, 1772, was particularly destructive to them [Windward Islands]; this dreadful tempest, which seems not to have gone further South than 15 degrees N. lat. fell on all the Caribbee islands, in their turn, from that degree of latitude, and passing along by Porto Rico, Hispaniola, and the South side of Cuba, swept across the mouth of the Gulph of Mexico, quite into the Bay of Honduras, in a course of near 700 leagues, or upwards; for its place of origination is unknown.
Jamaica, being fortunately screened by the islands of Hispaniola and Cuba, which intercepted the main stream of wind, escaped without any material damage; the inhabitants thought the weather a little tempestuous, but were not alarmed at it; the wind was chiefly felt on the North side of the island; but, in most other parts, they had deluges of rain, which flooded the rivers to an incredible height, tore up several bridges, and drowned a good many cattle, sheep, and some Negroes.

A gentleman, who was at this time passenger in a small vessel bound through the Gulph of Florida, for North America, gave the following account.
They had just left the West end of the island, on the 31st of August, but could then perceive no appearance of approaching bad weather. The wind indeed got round to the Westward, and continued in that quarter, blowing moderately, for three days. They supposed themselves off the Cuba shore, in the afternoon of September the 3d, and were then quite becalmed. On a sudden the wind came on violently from the North, and blew very hard till midnight. About half an hour afterwards it ceased at once, and a perfect calm ensued, which lasted only a few minutes; when a contrary wind as suddenly began from the South; and, by its opposition to the range of the waves, raised a most terrible sea. At one o’clock this wind increased to a tremendous height, and continued, without the smallest abatement of its fury, till two: from this time it abated but very little till noon, when it hauled round to the Eastward, and there settled into a moderate gale, which brought them clear weather again. The progress of this storm from the Northward, round by the West and South, to the usual quarter of the trade-wind, agrees with, and corroborates what has been before-mentioned in general, allowing for some small variations which may happen in places differently situated.
The History of Jamaica, Edward Long, 1774, Vol III p620-1