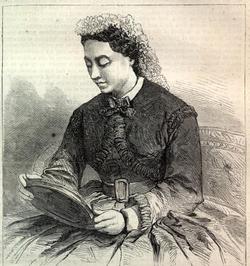 Queen Emma of Hawaii
1865 was a sad year in Jamaica’s history, over-shadowed by the tragic events in St Thomas in October. There were however pleasant happenings during the year, including one which involved the best-known Jamaican woman of the day, Mrs Mary Seacole, who was then living in Kingston although she also spent much of her time in London. On June 24th 1865 the monotony of Kingston life was broken by the arrival, for a brief stopover on her way to London, of Queen Emma of the Sandwich or Hawaiian Islands. She was welcomed with a royal gun salute and was met by a guard of honour of the 1st West India Regiment. As she landed she graciously acknowledged the cheers of the many citizens of Kingston who had gathered to greet her. The young Queen was entertained by the Custos of Kingston, Dr Bowerbank, and during the afternoon visited the Botanic Gardens and viewed Kingston from the terrace of Strawberry Hill. She returned, with her entourage, to the Royal Mail Company Steamer “Tyne”, after 11 p.m. and next morning left Kingston continuing her long journey from Hawaii to England. 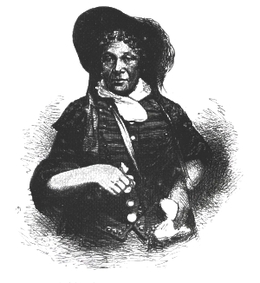 Mrs Mary Seacole
One of the citizens of Kingston who greeted the Queen was Mary Seacole. In the words of the reporter of the Colonial Standard “A carriage was in attendance at the wharf to receive Her Majesty and as soon as she entered the carriage Mrs Seacole requested the honour of placing around Her Majesty a magnificent cloak that had been presented to her by the Sultan, which she accepted, thanked Mrs Seacole and shook hands with her” and so in one brief sentence was chronicled the meeting of these two remarkable women. At least something should be known in Jamaica of the Wonderful Adventures of Mrs. Seacole in many lands as she entitled her autobiography. The University of the West Indies and the Jamaican Nurses Association have both done their share in keeping alive the name of this Jamaican pioneer who saved so many lives by her medical skills, in Jamaica, in Central America and most significantly in the Crimea in 1855-6. In the years after this she divided her time between Jamaica and England and was always in contact with members of the British aristocracy and Royal Family who continued to value her for the many lives she had saved during the war in the Crimea. 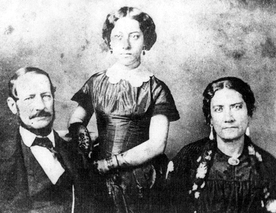 Emma with the Rookes in 1853
Considering this background it will soon be clear why Mary Seacole wished to pay her respects to the Queen from Hawaii. Queen Emma was as remarkable a woman in her own right as was Mary Seacole. She was the grand-daughter of John Young an early American or English settler in Hawaii, and his second wife who was an Hawaiian chieftainess. She was thus descended from the brother of Kamehameha, King of Hawaii, and had a claim to the Hawaiian throne. She was largely brought up and educated by Dr Thomas Rooke, an English physician and his Hawaiian wife, and from him she learned much about the care of the sick and also to love and respect the Church of England to which he belonged. In 1856 Emma married the young King Kamehameha IV who shared her enthusiasm for medical care, education and the Church of England. Together they planned great improvements for their country, but in 1863 Kamehameha IV died and was succeeded by his brother. Two attempts were later made to install Emma as ruler, but neither was successful. In 1865 Queen Emma decided to visit England and the British Government provided the ships to transport her and her party. It was on this voyage that she stopped at Kingston. In England she stayed at Windsor with Queen Victoria, and visited hospitals and educational establishments. She also journeyed to France where she was entertained by the Emperor Napoleon III and Empress Eugenie. After visiting Italy Queen Emma returned home. She died in 1885, four years after Mary Seacole had died in London. 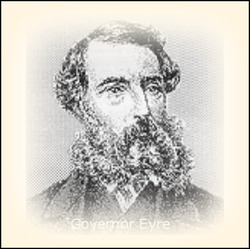 Governor Edward John Eyre
It is clear why Mary Seacole wished to pay her respects to Queen Emma. They shared a common interest in medical matters and a love of England and its royal family. They were also both proud Coloured women, making a place and a name for themselves in the European dominated world of the mid-l9th century. Each undoubtedly knew of the other’s reputation and their meeting was of considerable symbolic significance. The occasion was clouded in only one important aspect: the strange behaviour of Governor Eyre. For unexplained reasons the Governor did not welcome Queen Emma, but remained isolated in his Blue Mountain retreat of Flamstead, ignoring the whole event. He was severely criticized in the press for his rudeness to an accepted guest of the Queen he was supposed to represent. His behaviour was merely one more item to add to the growing list of grievances Jamaicans had against him. But why did Eyre refuse to fulfill his official functions? Was it that by this time his relationships with the Black and Coloured people of Jamaica were so embittered that he could not bring himself to give the required official welcome to a woman who, whatever her status, seemed to be a representative of the same group as George William Gordon? J.M.L.
Jamaican Historical Society Bulletin Vol 10 No 5 April 1992 p 37