Jamaica's history - always something new to find out!
'Mr. Charles P. Lazarus, whose energy of character, and mode of conducting his foundry, would honour any country, . . .'
The Sugar Cane vol 9 1877

LAZARUS' FOUNDRY.
Lazarus' Foundry in Kingston had been training boys as blacksmiths and men skilled in the handling of iron long before the American Civil War of the early sixties. I remember that when the French still prosecuted the work of the Panama Canal, the driving shaft of a Belgian dredger was broken. Every mother's son of a mechanical engineer from the States and France declined the rewards for repairing it; the majority decided it must be sent to New Orleans. Bennett, one of Lazarus' black boys, repaired it on the spot, and got an increase in pay of $7 daily, and the professional jealousy of the other mechanics.
in "Northern Notes by J.V.T.", Clarion, British Honduras, April 6th, 1916. 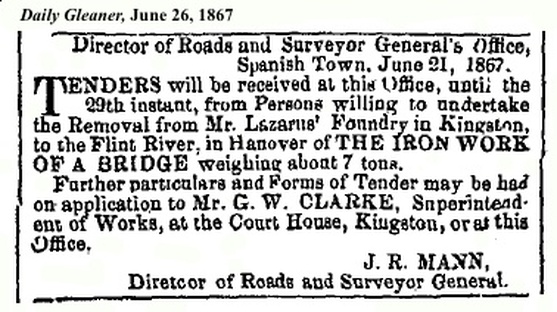 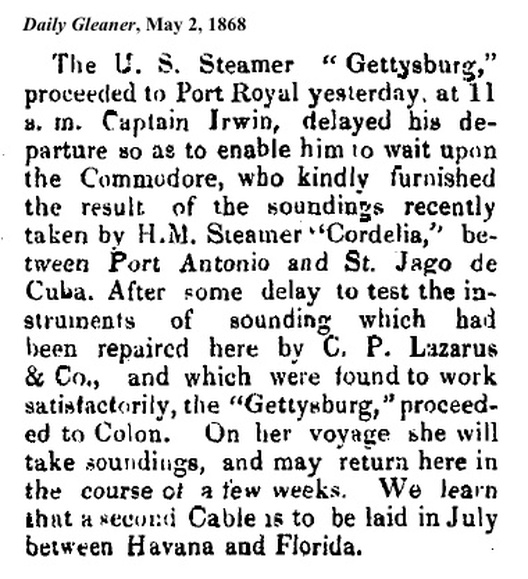 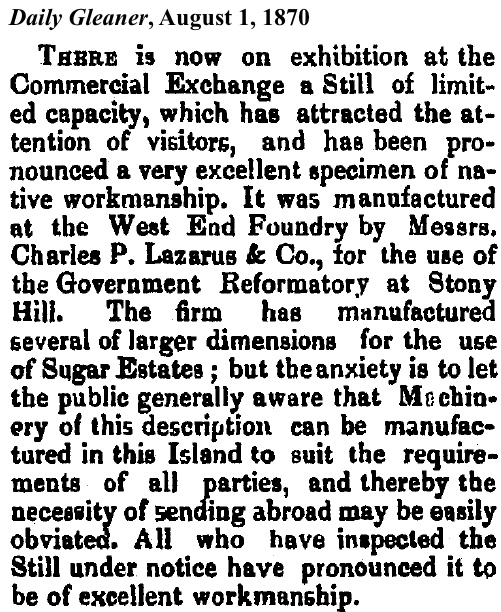 NATIVE ENERGY AND ITS REWARD!

On Thursday afternoon, about 50 gentlemen, comprising the leading business and professional men of this city, met by invitation at the Foundry of our enterprising Tow[n]sman, Mr. Charles P. Lazarus, to receive His Excellency the Governor, and partake of luncheon.  The hour named was 2: 45 but the Governor did not arrive till past five o'clock so that several gentlemen had, through pressure of business and other reasons, to depart before His Excellency appeared.
Conducted by Mr. Lazarus, and accompanied by the visitors, Sir John made a slow and careful inspection of the various departments, and, as we hear, expressed unbounded interest and satisfaction with regard to the various details and processes that were brought to his notice.
The grand triumph of Mr. Lazarus's skill was a huge Waterwheel, 26 feet in diameter, constructed by him for Savoy Estate, the respected Attorney for which, W. Anderson, Esq., was present as well as the energetic Manager, William Harty, Esq. This wheel is the first and grandest undertaking of the kind that has ever been attempted in the island, and no language can be strong enough to describe the credit due to Mr. Lazarus, who, a Son of the soil, by his natural talent and on aided efforts, has made for himself an named as is an honor to his country.  At the sumptuous luncheon provided by Mr. Lazarus, that gentlemen delivered a clever and humorous speech, in which he conveyed to his Excellency, in a witty but most respectful manner, a few home truths for which, we are sure, Sir John was truly grateful.  Mr. Lazarus said that humble man as he was, he had always kept before him as an object worthy of attainment, that he should one day accomplish something which even the Governor would deign to notice.  That goal he had now reached, when he found seated on his right -- Sir John Peter Grant, the Governor of Jamaica.  The Governor briefly testified to the energy and worth of Mr. Lazarus, after which Mr. Harty made an able and practical speech in which he urged upon Sir John the absolute necessity of maintaining a large and continued supply of Cooly [sic] labour.  Shortly after Mr. Harty's speech, His Excellency took his departure amid the loyal greetings and cheers of the gentlemen assemble.
All honor to old Jamaica!  In Literature, in the learned Professions, in the Industries, her sons have held their own against all rivals.  Is it not a terrible and disastrous paradox that from so much ability and worth every position of honor and value should be so persistently withheld?
ship repairs - 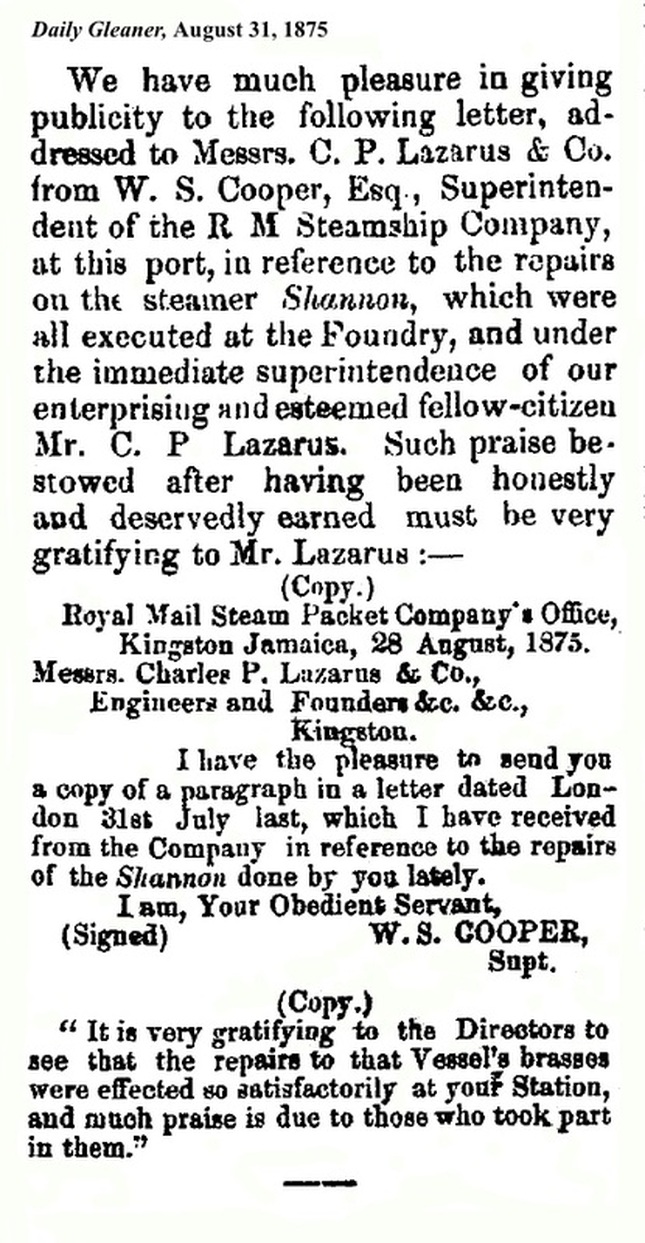 Mr. C. P. Lazarus, called, and examined by the Chairman. I am a large employer of labor in this city. I carry on large works as a mechanical engineer, iron founder, and blacksmith. Mine is the only foundry in town now; there was another, but it is closed. I employ from one hundred to one hundred and ten hands. Out of that number, some fifty or sixty used to be boys. I have had plenty of experience of boys under apprenticeship. Since 1849, when I was apprenticed myself, I have had twenty-eight years of it.
In 1879 Charles Lazarus constructed the engines for the City of Kingston, the first steam ship to be built in Kingston Harbour - 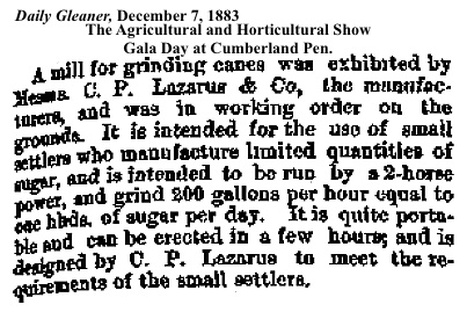 . . . and sometimes there were problems - 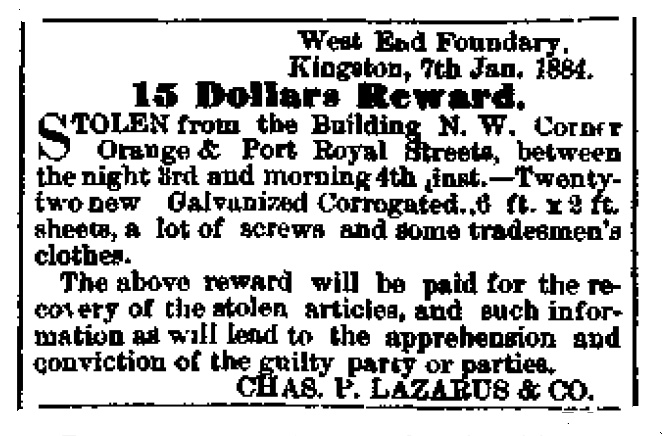 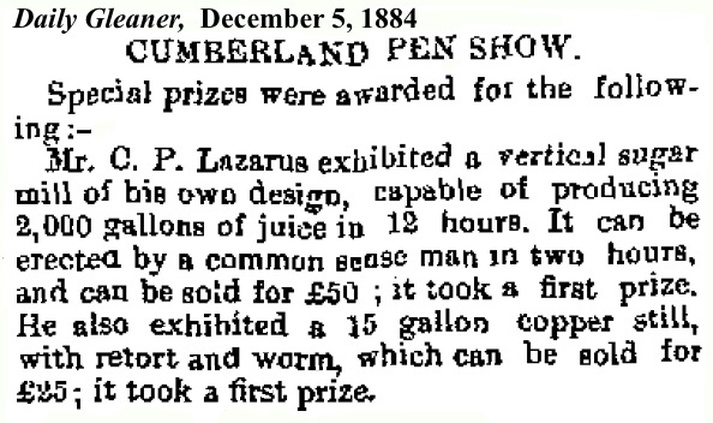 . . . . between 1887 and 1889 Charles P. Lazarus was declared bankrupt - and there is quite a lot of material on the process of the bankruptcy, which I will have to work on, taking into consideration my total lack of knowledge of the process! 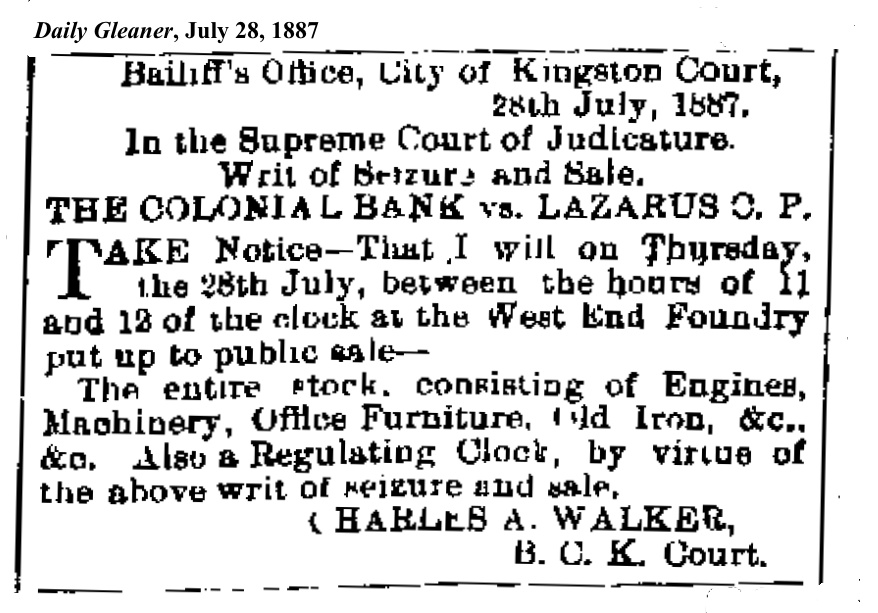 Daily Gleaner, August 8, 1887
A provisional order of bankruptcy was made in Chambers on Friday before Mr. Justice Northcote, against Messrs C. P. Lazarus & Co., on the petition of Messrs. Emanuel Lyons and Son. 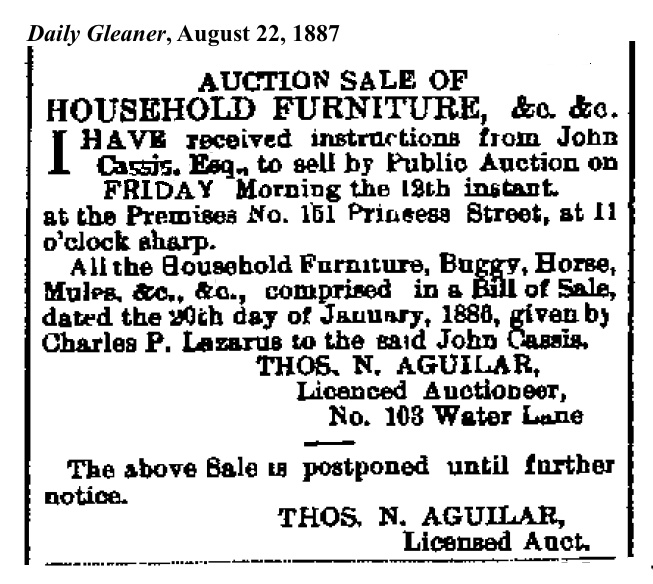 Daily Gleaner, September 23, 1887
Mr. Charles Philip Lazarus, of this city, Ironfounder, having been provisionally adjudged a bankrupt, since the 5th August last, a meeting of creditors, under the bankruptcy law, will be held at the Court House, in Harbour Street, on Tuesday the 4th October next at eleven o'clock in the morning.
Daily Gleaner, October 7, 1887
At the meeting of the creditors of Mr. C. P. Lazarus, held on Tuesday last, a resolution was passed directing that an adjudication of bankruptcy be made against him. 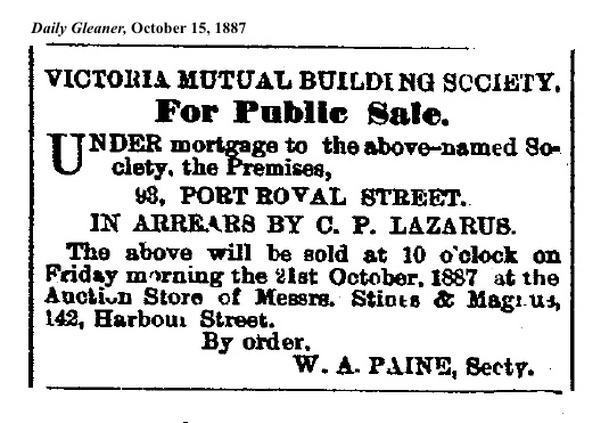 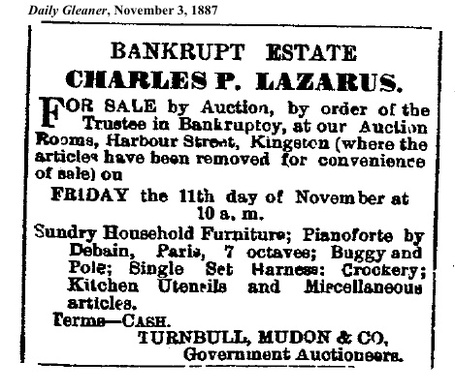 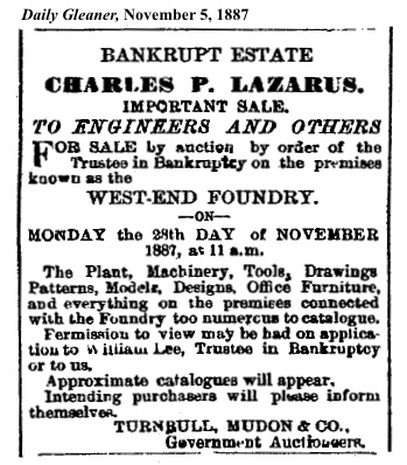 1888
then in 1889 - there was a series of interesting court appearances, dealing with property in the name of Ada Maude Lazarus, the daughter of Charles Philip, and his wife, Mary Catherine (formerly Rio), whom he had married in a Roman Catholic ceremony, on St Valentine's Day, 1859. Two sons are mentioned - the names I have found are - Charles Philip, junior, later described as a mechanical engineer, and Charles Alexander, described as a moulder.
Daily Gleaner, June 21, 1889
LEE, WILLIAM, vs. LAZARUS A. M.
This was a suit brought by Mr. William Lee, the plaintiff, as Trustee in Bankruptcy of the estate of Mr. C. P. Lazarus, against Miss Ada Maude Lazarus, to set aside the conveyance to her of Kingston Pen as being fraudulent and void, against the Trustee in Bankruptcy under the provisions of the bankruptcy Law, 1879.
The Attorney General and Mr. Barrister Oughton instructed by Mr. T. L. Harvey of the firm of Mr. Harvey & Bourke. appeared for the plaintive, and Mr. Advocate S.C. Bourke and Mr. Advocate Henry Vendryes, instructed by Mr. E. L. F. Morais for the defendant.
The case was partially heard and adjourned until this morning.
Daily Gleaner, July 2, 1889
LEE VS LAZARUS.
This case was heard during last week before the Acting Chief Justice, the Hon. C. Ribton Curran sitting in equity. As will be remembered the suit was instituted by the Trustee in Bankruptcy to set aside the deeds under which Miss Ada Maud Lazarus, the defendant, acquired Kingston Pen a very valuable property on the Long Road. After reviewing the arguments by Counsels and sifting the evidence on both sides, His Honor was of opinion that the property was acquired by moneys of Miss Lazarus which by family arrangement was entrusted to her father to purchase the property for her. Judgement was delivered in favor of Miss Lazarus, dismissing the plaintiff's case with costs.
Daily Gleaner, July 17, 1889
Lea, William, &. vs. Lazarus A. M., and al— Motion for a new trial.

Daily Gleaner, October 9, 1889
The Supreme Court of Judicature will resume its sitting at noon to-day, before His Honor Sir Adam Gib Ellis, Chief Justice, the Hon. Mr. Justice Curran and the Hon. Mr. Justice Northcote, when judgment will be delivered in the case of the Trustee in Bankruptcy vs. A. M. Lazarus for a new trial.

In 1890 business opened up again at new locations, one being Kingston Pen: 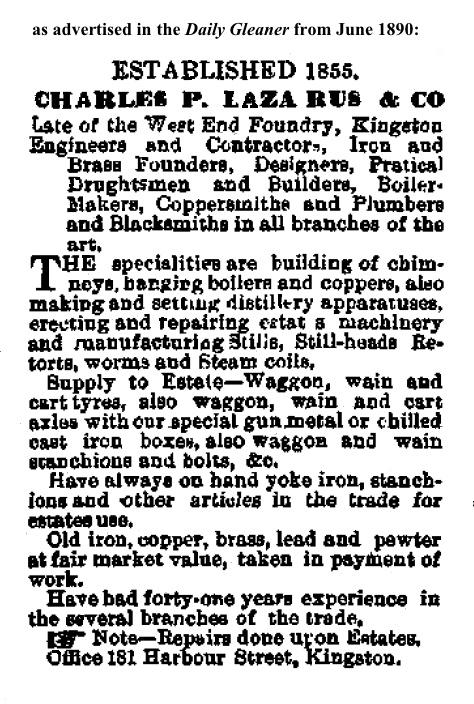 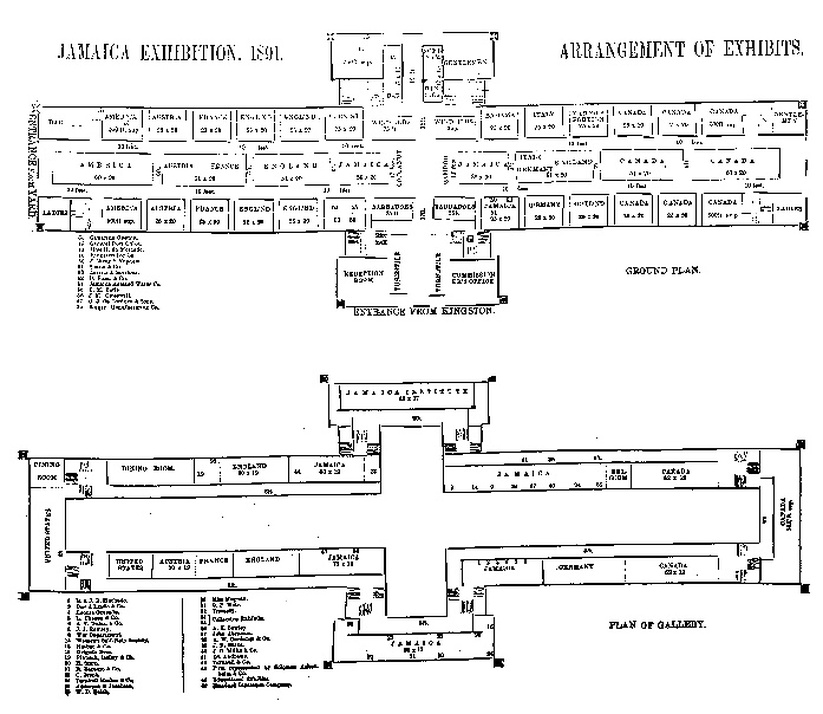 These are the plans of the two storeys of the main building of the Exhibition; this building stood much where the old main buildings of the Wolmer's Schools still stand - in parts of which buildings I spent much of my time between 1957 and 1991! 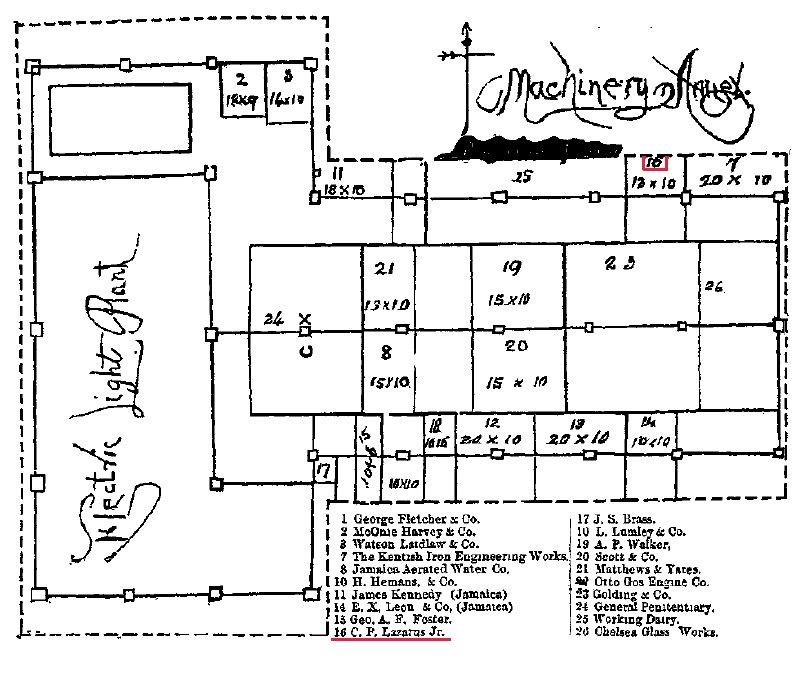 The plan of the Machinery Annex at the Exhibition includes the name of C. P. Lazarus, Jr. - which may represent the family's business at a point when there were some legal problems over its status!

In 1893 Marie/Rachael Francis the influential and much respected mother of C. P. Lazarus died at about the age of 84; the notice of her death, as it appears in the Gleaner, however adds an interesting piece of information - that she was also the mother of another prominent Black Jamaican business man, John Cassis. 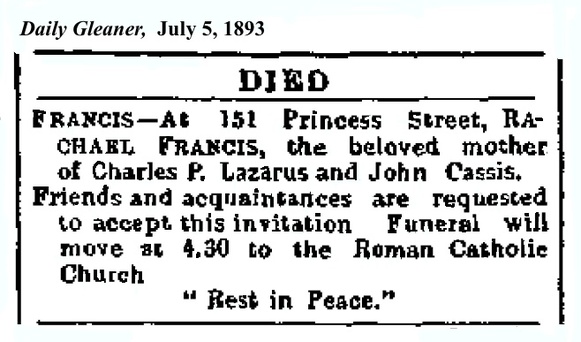 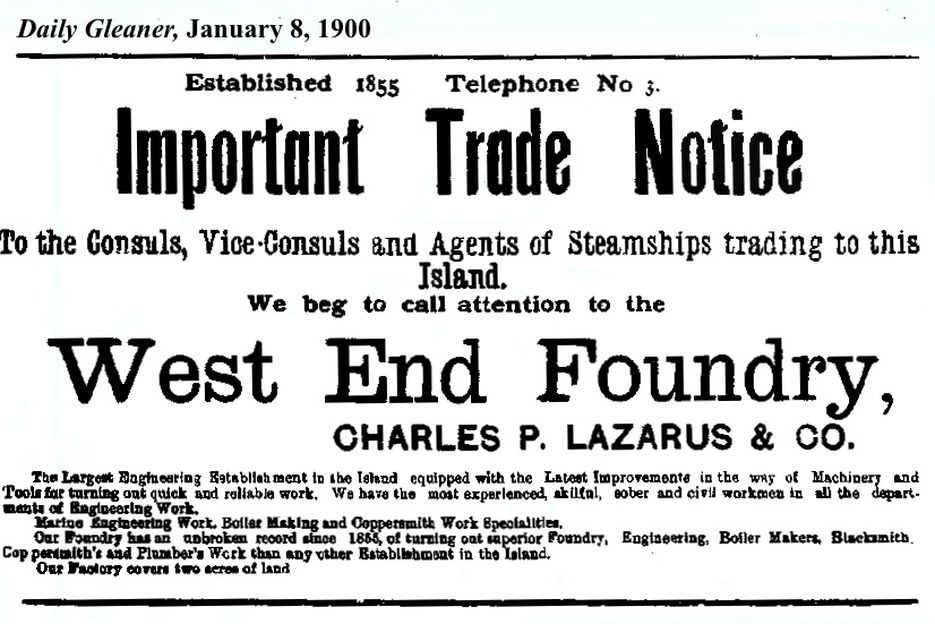