In 1907, four months after the earthquake, Charles P. Lazarus, at the age of 71, sets out his lifetime experience as a building contractor: 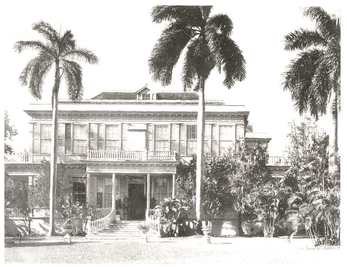 'We next arrive at probably the finest store in this city. We refer to the extensive and lofty premises built by Messrs. Charles P. Lazarus & Co. for Mr. G. C. H. LEWIS, general provision merchant. The salesroom extends from Port Royal Street, a distance of 108 feet towards the water front, is well supplied with ventilators on the roof and at the ends of the building, is cool and healthy, and the entire building, including the large storeroom in the rear, ought to be a source of pride to the builders. We can confidently recommend Messrs. Lazarus & Co. to anyone who contemplates building and would advise a visit to this store before making definite contracts. The offices, which look on to Port Royal Street, have been supplied with handsome black walnut furniture, from the establishment of Schwarzaelder & Co. of New York, who are represented in Kingston by Mr. G. J. DeCordova, at Freemason's Hall. The back premises are 70 feet long, and adjoin Messrs. McDowell, Hankey & Co.'s wharf. All the buildings are supplied with corrugated iron roofs.'
'The fine premises occupied by Messrs. MALABRE & CO as ironmongers, has been entirely refitted and repaired by Messrs. Lazarus & Co., and will continue be an ornament to the business portion of the city. Although this building was not entirely destroyed, it suffered severely in the fire of Dec. 11th and the repairs have been very thorough and extensive.'
'On the opposite corner is being erected a store which has been bought by Mr. HENRY W. DACOSTA, and will, we presume, be occupied by him as soon as Messrs Lazarus & Co. can complete the building.'
'The fruit store of Mr. SAMUEL MENDES is also being rebuilt as it was before the fire, C. P. Lazarus & Co. being the builders. Adjoining the above are two shops, owned by MISS MORAIS; one store is now tenanted by Messrs. CRANG & CO. as a retail brewery, and the other will be occupied by Messrs DESNOES & SON, as a retail liquor store. Messrs C. P. Lazarus & Co also built these places. Next come two large and well ventilated stores, owned by Mr. DAVID MARTIN and formerly occupied by Isaac Levy & Co. These stores are now leased and occupied by Mr. E. L. SOLOMON for his general provision and produce business. C. P. Lazarus & Co. are the builders.'

the new Synagogue on Duke Street -

Daily Gleaner, April 24, 1883
The Late Fire—Special Appeal.
THE terrible calamity which has befallen Kingston and inflicted on all classes a
common sorrow, has evoked practical sympathy from abroad, and the inhabitants of the Island, with wonted generosity, have aided promptly and liberally in assuaging, as far as possible, the misery of the direct sufferers by such calamity.
Though heavily taxed, the resources of the public we are certain, will still be equal to the Special Appeal which it is our sad duty to make. The losses which have fallen on the Jewish community are too well known throughout the Island to need narration. We have the honour to represent the smaller section, known as the English and German Jewish Congregation. Our beautiful edifice in Orange Street, and the minister's residence which adjoined it, have been entirely destroyed. Besides this deplorable loss, other buildings, including the schoolhouse, in which we held a moiety of interest, helped to feed the fury of the conflagration.
Apart from the destruction of our Synagogue, the centenary of which we had hoped in about three years to celebrate, the members of our community, with scarcely an exception, have suffered greatly in their personal interests by the disastrous fire.
Surrounded by such painful difficulties, we ask assistance, and cherish the anxious hope that the cause itself, more than any language that might be employed in advocating it, will plead for the aid that is respectfully solicited to enable us to rebuild our edifice which, for nearly a century, had been dedicated to the worship of God
Subscriptions will be thankfully received and acknowledged by either of the undersigned: Isaac Lawton, chairman, H. Stern; George Lyon Jnr, E E Lewin, Chas. Alexander; George Magnus.
Kingston, January 29th, 1883.
Daily Gleaner, September 20, 1883
The efforts being made by Mr Benjamin Franklin, as honorary secretary, and a small committee, to raise a fund for the erection of a Synagogue in Jamaica, for uniting the congregations under one minister, has resulted, in about £850 being subscribed in England. 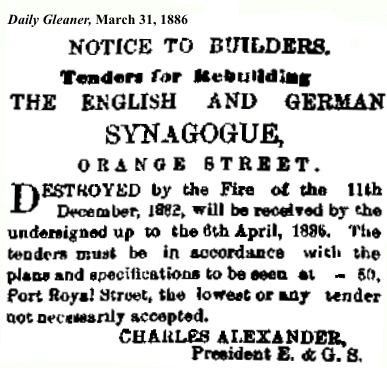 Daily Gleaner, July 20, 1888
CONSECRATION OF THE SYNAGOGUE
OF THE
UNITED CONGREGATION OF ISRAELITES.
It is now over five years since the destructive fire of December, 1882, when so many hundreds of buildings were burned in Kingston, among which, were the two Synagogues, the only places of worship in Kingston, of the Portuguese and English and German Jews. Shortly after this unfortunate occurrence the two branches resolved to unite themselves, and as one body, to build a temple fitting for the worship of Almighty God. By the aid of liberal donations from the Israelites of this country and of all parts of the world, assisted by the generous gifts of their Christian friends, the Amalgamated Congregation of Israelites, as the united body is now termed, have now completed the handsome and imposing structure situated on the North East corner of Duke and Charles Streets, which is without doubt an ornament to the city of Kingston and may be classed for architectural design amongst the finest of the places of worship in this Island.
The foundation atone was laid in August, 1885. The building was designed by Mr. Messiter, and built by Mr. C. P. Lazarus, under the supervision of Mr. H. Barrow, the Chairman and Treasurer of the Building Committee.
The building is of the Byzantine style of Architecture. The frontage is in Duke Street, which with its violet stained glass windows, and its diaper tiled facade supported by two towers, one on each side as the ladies entrances, forms a most imposing spectacle.
The inside of the building is 60 ft. in length by 40 feet wide and from floor to ridge of roof may be estimated at 45 feet.
A gallery of light structure, supported by elegant iron columns with picturesque gilt capitals runs around three sides of the building. The Capitals of the column are of unique design, representing vinery and breadfruits.
On the east side built in the wall is a handsome and masterly constructed mahogany ark. The panels of which are tastefully inlaid with gold moulding. Above the arch of the ark are two marble tablets on which are carved in gilt letters the ten commandments abbreviated in Hebrew Characters. These tablets were presented by Mr. Kurdshedt[?] now at New Orleans who was born in Kingston. These tablets are supported by gilt fluted columns, surmounted by crowns." On either side of which in
bold gilt letters on blue ground are these mottoes in Hebrew "I have ever set the Lord before me" and "Remember in whose presence thou standest."—Above the tablets in a circle of 14 feet diameter temporarily fitted with green frosted glass and woodwork intended eventually for cathedral stained glass windows which we trust
the congregation may shortly be able to erect. The building is gabled, the inside of the roof which is all in keeping with the Byzantine Style of architecture is of wood work, of smooth finish, unpainted and imparts a lofty and cathedral appearance to the interior. The Building is lighted chiefly by three elegant coronet-style Gas Lamps suspended from the roof, also by several suspended gas burners under the galleries. The seats are arranged both upstairs and on the main floor, on raised platforms. The seating capacity is 700. The site of the Building with consequent expenses cost near £1000 and the structure with its interior decorations about £5,000.
Four lofty lamps, one to be placed on each corner of the minister's reading desk, have been presented by Messrs. Ashenheim and Myers. A clock which is plaid in the centre of the West Gallery by Mrs. H. Stern. The decorations which adorn in festoons the interior of the ark were presented by Mrs. D. L. Motta. The covering of the reading desk in heavy brocaded silk, and wool was presented by Mrs. J. R. deCordova— As a whole the building is as elegant in appearance and enjoys the advantage of a superior locality than that occupied by the burned buildings.
We should not omit to mention that in both the towers leading to the ladies galleries are flights of steps, self supporting, of cement concrete, with handsome iron balustrades and handrails.
Yesterday evening the interior of the building was profusely decorated with garlands and flowers. The decorations consisted of very handsome floral designs.
The service for the consecration was largely attended, and many had to stand in the aisles and doorways. Among those present we noticed Hon. H. J. Kemble, J. Orrett, O. Marescaux, A. H. Jones, Esqrs., Hon. T. L. Harvey, Colonel Loveridge, Captain Claridge, Rev. Geddes, Inspt. McLeod, Colonel Patchett, Dr. Carpenter, Dr. Anderson, Hon. J. M. Farquharson, S. P. Smeeton, Esq., Rev. Griffiths, P. A. Mudie, W. Morrison, C. L. Campbell, Esqrs. The ceremony was performed by the Rev. S. Jacobs, the minister who had compiled and arranged the service for the occasion.
At 6.30 the minister, accompanied by the wardens and directors bearing the Scrolls of the Law, entered the doors of he Synagogue, while the reader exclaimed—"Open unto me the gates of righteousness; I will enter them and praise the Lord." The seven circuits were then made by the minister and elders, during which hymns and anthems were chanted by a choir of ladies and gentlemen of the congregation, who had volunteered their services for the occasion, and who had been ably trained by Mr. E. N. Romney, to whose efforts, assisted by Mr. C. Davidson, who presided at the harmonium, we are informed, the great success of the choral parts of the service is due. After the circuits, the Rev. S. Jacobs delivered the following lecture and prayer:
"And they shall make unto me a sanctuary, and I shall dwell in their midst"-
[Exodus xxv., v. 8.]
…………………………
Altogether, the service yesterday evening must be gratifying to the Jewish members of the community, and we must congratulate them on now possessing a handsome and ornamental building, wherein to continue the worship of the Divine Creator. 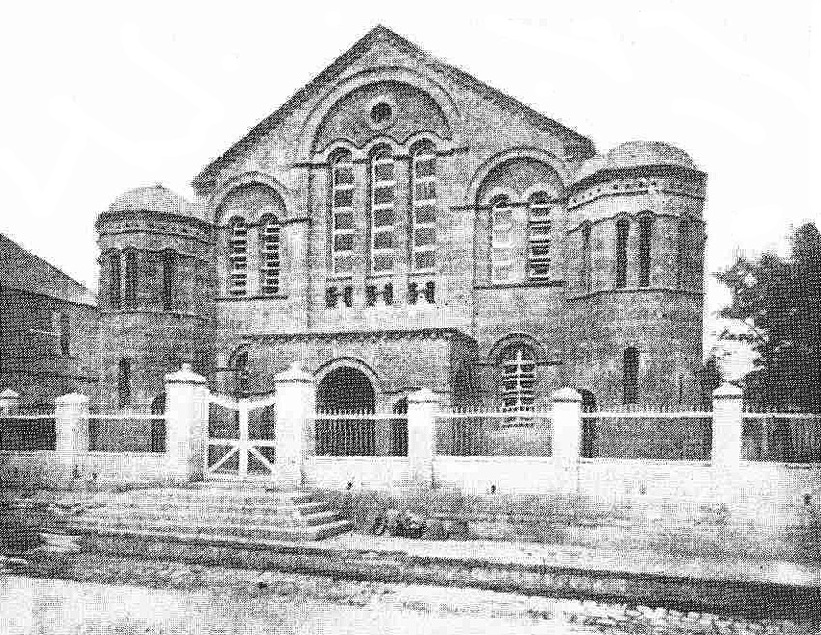 work for the city of Kingston - 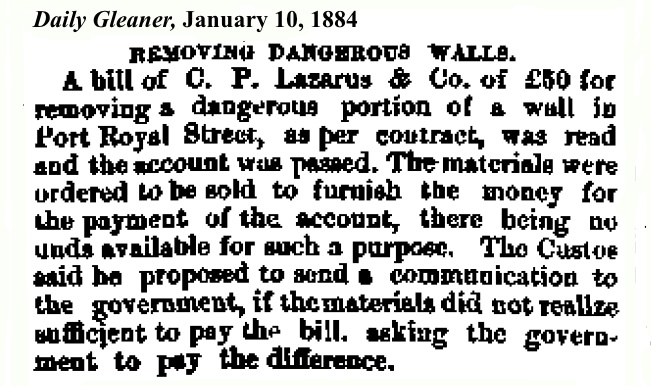