Jamaica's history - always something new to find out!
Notes on THREE HISTORIC BUILDINGS AND/OR SITES by Joy Lumsden

1. WAREIKA - the origin of the name

2. BABBIN’S CHURCH
I have no idea how many times I have driven through the junction of Old Hope Road and Lady Musgrave Road in nearly forty years of living in Kingston, mostly in the Cross Roads and Liguanea areas, but for many of those years I certainly expected to pass what was familiarly known as ‘Babbin’s Church’ standing on ‘Babbin’s Corner’. It was only when the Church, correctly called Christ Church, was falling into ruin, and then finally disappeared that I found out anything about its history.
I already knew the name of Francis Bavin from my work on the career of Robert Love; Bavin had been one of the small group of white men who had been involved with Love’s  People’s Convention around 1900. I also knew that Bavin had been elected by an easy margin to the Legislative Council for St Catherine in 1901. However, it was largely by chance, while looking for other information, that I picked up the references to the origin of the church he established just north of Cross Roads.
The Reverend Francis Bavin was a minister of the United Methodist Free Churches in England for 25 years, and came to Jamaica in 1898 as General Superintendent of that church here. In 1900 he decided to build a church in the area just north of Cross Roads for a population of some 200 to 300 people, and children in addition, who were not being served by a church. The foundation stones of the new building were laid on December 20, 1900, by Major Roxburgh, Captain Ogilvie, Mr Kingdon and ‘little Miss Dottie Bavin’, the minister’s daughter. Three of these stones are still visible on the site and you can see the name ‘Dotfie’ clearly inscribed on one of them as you drive up Old Hope Road past the corner and the site.
A notice of the first services in the church, to be held on February 3, 1901, included a description of the original church. It is described as being built ‘at the angle of Hope Road and King’s House Road’ (perhaps some member of the Society can explain those road names, which differ from the present ones); it was built in the Gothic style, of framed brick construction on a concrete foundation. It had cement plastered walls inside and out, painted in imitation of stone blocks. In front was a handsome porch, with a belfry above. The roof is described as being made of ‘pitch-pine bevelled battens arranged diagonally, in order to give the best appearance’. The windows in the chancel and at the front, as well as the Gothic tops of the others, were of stained glass. The neat, comfortable benches were of pitch-pine, and there were a substantial desk and communion table. All the work had been done by local labour. The church was designed to accommodate about 200 people.
I have established from a reference in the Daily Gleaner on February 26, 1907, that Christ Church, of the United Free Methodist Churches, was among buildings destroyed in the earthquake of January 1907. I have not so far followed up the history of the church building at Bavin’s Corner beyond this point; we can presume that it was rebuilt at some stage, but whether the church rebuilt after 1907 was the same one that was recently demolished, I do not know, as it may have suffered other disasters in subsequent hurricanes.
From the Who’s Who in Jamaica for 1921-4, we know that Francis Bavin resigned from his position as Superintendent of the United Methodist Free Churches in Jamaica in 1906 because of ill health; he resigned his position on the Board of Education at the same time.
He remained active in church work, and was involved with the Jamaica Agricultural Society. His chief area of interest seems to have been Freemasonry; he was Deputy District Grand Master, and Past Grand Chaplain of Craft and Mark Free Masons for Jamaica. He maintained a home in Jamaica, called Bavington, in Stony Hill, but seems to have travelled widely in Europe and the Americas. His home in the United Kingdom was at King’s Broom, Alcester, in Warwickshire. Since he was born in 1853, he was by this time in his seventies, but I have no information as to when he died or whether he died in Jamaica. It is interesting that although his connection with Christ Church only lasted for about five years, it was his name that became firmly attached to the church and the corner, so that even today, nearly a century later, the name still lingers.
In the 1930s the various churches of the Wesleyan Methodist tradition in Jamaica were united, and Bavin’s church continued to serve under the new arrangements. The congregation of the church was forced to find a new home after hurricane Gilbert severely damaged the building in 1988. Attempts to raise Ja$3 million to restore the church, under the aegis of Providence Methodist Church, where the Christ Church congregation had found refuge, had little success. As the building was deteriorating and being vandalised, it was decided to demolish it. This Society has offered assistance in removing, and so preserving, the remaining foundation stones, in the hope that at some future date, when the new use for the site has been decided by the Methodist Church, a suitable marker can be put up, incorporating these relics of the original church. If this is done, this corner may still be known as Babbin’s Corner in 2095!

Images of 'Babbin's Church' -- a reconstruction of what it once looked like
-- and how it looked after Hurricane Gilbert in 1988.

3. COLBECK CASTLE: ‘a riddle wrapped in a mystery inside an enigma’ After reading the articles on Colbeck Castle in Vol. 6 of the Society’s Bulletin, the above heading is about as close as I can get to a suitable sub-title for a comment on this building. Unfortunately, no-one had been alerted to prepare an introduction to Colbeck Castle for our trip there in July, and a quick survey of the Vol. 6 articles did not help much in providing a snappy summary of their contents. The most conspicuous fact about the Castle seems to be that very little is known about it. It was first mentioned by the name ‘Colbeck Castle’ only in 1896 in an advertisement for the sale of the property at that time. Before that, although the Colbeck property is mentioned, and at least one house is mentioned, no-one seems to have recorded the existence of a building as substantial and distinctive as that whose ruins we can now visit.
In Vol. 6 there are articles about the castle by B. Machado, then Editor, and S. A. G. Taylor, and references to research by Geoffrey Yates, Tom Concannon and H. P. Jacobs; there are also reproductions of pictures/photos of the castle (those opposite p. 201 do not get a mention in the Index, and I only found them by accident). All this material only serves to create confusion in the mind of the reader. The writers disagree as to the possible time of the building of the castle, which apparently could have taken place at a variety of times in the late 17th century, or in the 18th century. It is also not known who built it or why, though it seems unlikely that it was built as a defensive position. It is not clear whether it was ever completed, and if it was, it was almost certainly never inhabited. It may have been damaged by hurricanes and by fire, but if so, the fire was probably minor, and comparatively recent. One certainty seems to be that it has been vandalised in the past and that it continues to deteriorate, as nothing much seems to be being done at present to preserve and maintain it.
It is a most impressive structure; having never seen it before I could scarcely believe my eyes when I saw it loom up over the acres of surrounding scrub. Tom Concannon described its external appearance as being a copy of a 17th century Italian villa, and I expect he knew what he was talking about, but how or why such a structure came to be built in Jamaica, whenever it was built, seems permanently hidden from us. I wonder if a survey of existing knowledge, and further research, might throw more light on its origins. Even if we cannot find out anything more, we ought to be able to maintain it better, and make it a site fit to be visited; I’ve certainly visited ruins in England which are less impressive and with almost as little history, which still manage to attract the visiting tourist.
Perhaps some member of the Society might wish to take the following extract from a currently available guide book (published 1993) as the starting point for a reappraisal of the castle and its history: ‘Colbeck Castle is located two miles north of Old Harbour on a side road. Once perhaps the largest building in the Caribbean, it is generally thought to have been built in the late 17th century by an English settler named Coll. John Colbeck, as protection against Maroon attacks and possible invasion by the French. The main walls of this huge brick mansion are still erect, although the roof and floors are gone. Beam slots in the higher walls give an idea of the size of beams used in the construction. Four underground slave quarters can be seen at each corner of the castle. The building is in the midst of what is now a large tobacco farm.’ Alternatively, the Editor might wish to announce a contest for contributions to the Bulletin listing the largest number of queries about statements in this passage! I will offer a copy of Robin Blackburn’s The Overthrow of Colonial Slavery, 1776-1848, (London, 1988) as a prize for the most comprehensive list. [This offer no longer applies; my grandchildren long since took over my second copy of Blackburn!] 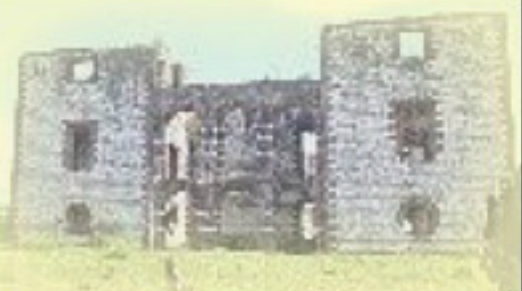