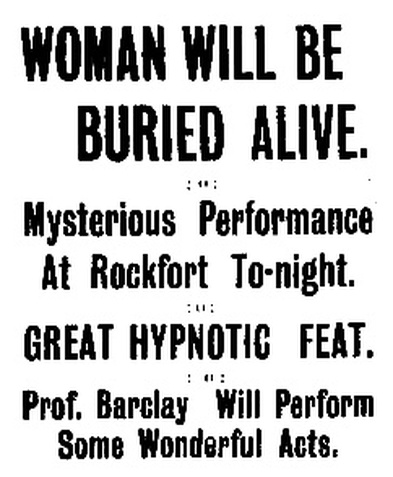 If the proposition were made to you to test what the grave has to offer, especially in a tropical country like this, the chances are that you would decline. To be buried alive has been for all time the horror of horrors to the human mind, yet this will be done at Rockfort Gardens to-night when Prof. W. A. Barclay, "The King of Hypnotists," will put his wife into a trance and then bury her.
This marvellous feat has been done by Prof. Barclay in the States with great success, and there is no doubt that it will attract thousands of persons to our popular pleasure resort to witness it.
The subject of the burial after being hypnotized will be placed in a coffin, let down into the dreaded six feet underground and there allowed to remain for a week all animation suspended, dead as far as anything on this earth is concerned. Six days after the burial the body will be taken up, the coffin lid lifted, and the young woman restored to life again.
This mysteriously thrilling act was first performed by Prof. Barclay at Boston in 1901, and it created widespread interest in the American city.
The Professor who is a Jamaican, first performed the feat on a fellow countryman, Parker Johnson, who was described in the American journals as "a possessor of doubly insulated heroism."
As some persons may be inclined to think that the performance is a trick, an air shaft, which will extend from the coffin just above the sleeper's face outside the grave is so constructed that at any time those desirous of doing so can look down the vent and see the subject lying peacefully in her living tomb.
The professor will perform many other wonderful feats, and his entertainment will be just brimming with comedy, laughter , and fun. The most mysterious, however, of all, will be the burial act a feat that will arouse widespread interest and which will draw the biggest crowd that has been to Rockfort Gardens yet.

Professor Maharajah's real name was Wilmont A. Barclay and he was originally from Jamaica. He toured Europe with an act featuring escapes before coming to the states. At that time in America, black entertainers were not allowed to play in the finer vaudeville houses. This severely limited Barclay's career possibilities but by donning a turban and taking up an Indian name and presentation style, he was able to perform all across the country on the major vaudeville circuits. The same American audiences who would object to seeing him as a black man performing magic on stage came flocking to see ‘Secrets of Mahatma.’ By the early part of this century the mystical image of an Indian magician was so firmly established in America that non-Indians could play the role to benefit themselves in many ways.
Shreeyash Palshikar