The gentlemen who were present at the initial meeting and were foundation members of the Club were Messrs. Caleb Hall, James Allwood, R.S.Haughton, George Pearce, W.A. Paine, Lawrence R. Fyffe, E. Sanguinetti, Thos. Harty, A.H. Jones, S.R.Whitehorn, R. Livingstone, F.L. Harris, J.B. Jones and W. Smith.
[based on information in a history of cricket in Jamaica by J. Coleman Beecher in 1926.]
W A Paine speaking in 1906: He recalled how in 1862 there was no cricket worth speaking of. In 1863 a few gentlemen, ardent lovers of the game met at the Collegiate Hall and formed the Kingston C. C. They had no ground and had to play on the racecourse without any sort of prepared pitch and having only one bat. He recalled with amusement the first match they played at Spanish Town against the officials. Caleb Hall was captain of their team. They played from 7 a.m. till nine o'clock, when the officials went to their duties. Their team meantime went bathing in the river and fishing till 4 o'clock when play was resumed and continued till dark. They won the first match.
Interestingly, in 1913, at the time of the Club's 50th anniversary, William Morrison jnr, then Captain of the KCC, stated 'that his father [William Morrison, headmaster of the Collegiate School] was present on the occasion the Kingston club was founded: not as a member - those who knew him could never imagine him as being the member of any club physically. His father was at the meeting as a scribe taking notes, and by faith he printed them. And for 40 years his father's pen traced the record of the club in letters of gold.'  Daily Gleaner, January 8, 1913
R. S. Haughton also speaking in 1913: He could well remember the Old Collegiate School and the active young men who had gathered together in a a room there to form a cricket club - the Kingston Cricket Club. They were told by some that the Club would not last, that it would share the fate of the others that had gone before it. But these forebodings could not dampen their enthusiasm. They went ahead, formed their club, and it had lived, lived and prospered in spite of many vicissitudes. 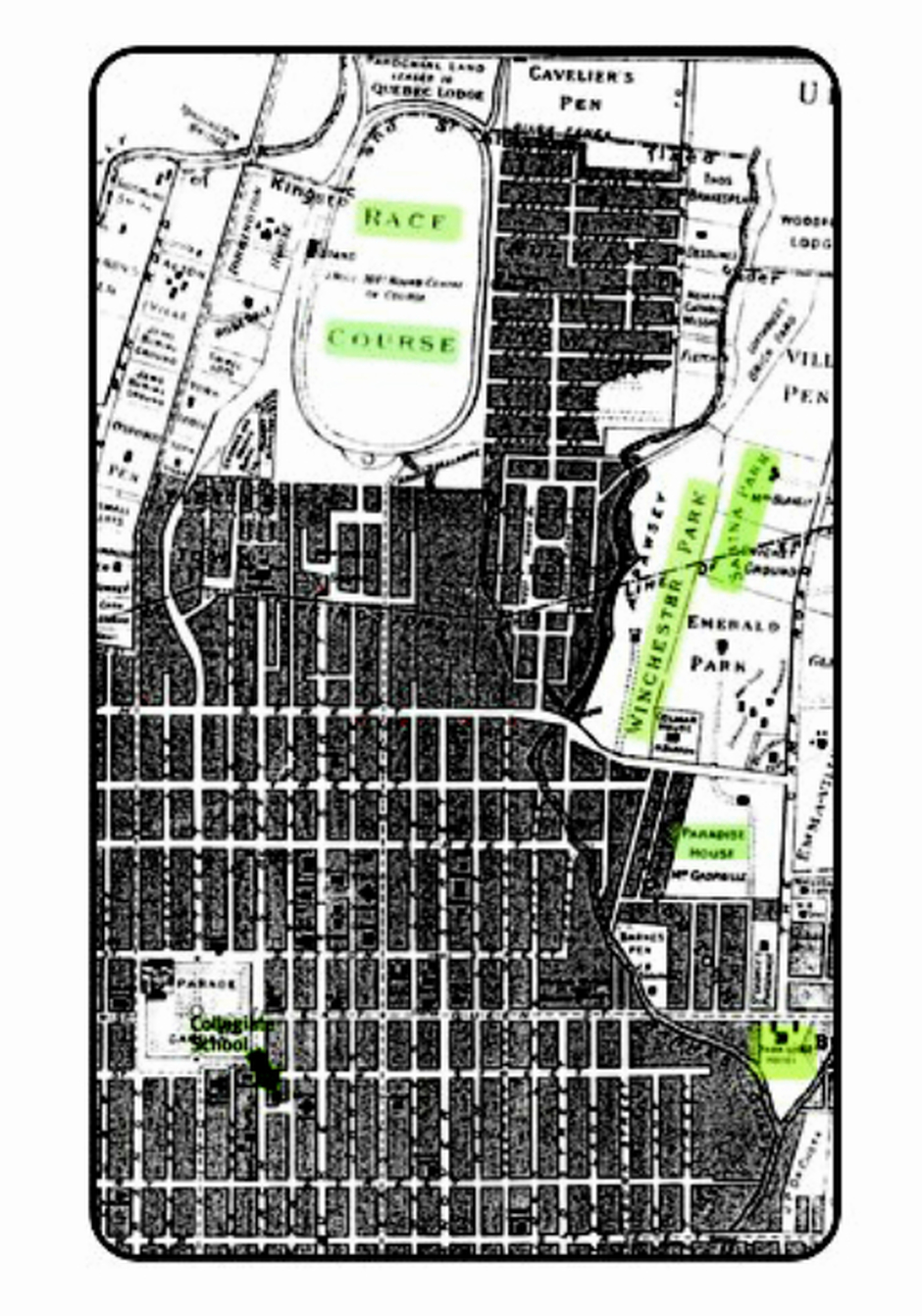 The first ground was McIntyre's Pen, now known as Winchester Park, on the site of the present St. George's College. This pen was sold to a Mr. Lofthouse in the latter part of 1863, and the club went to the Race Course which they utilized until 1866. In that year Dr. Bowerbank, one of the original honorary members of the Club and a warm supporter of the game, gave the use of Park Lodge lands. A sum of money was spent for levelling and sowing grass when the property changed hands and the members again resorted to the Race Course, which they used continuously until 1877. In that year a piece of Paradise Pen was loaned to the Club by the late Mr. H. F. Colthirst and in 1880  Sabina Park was rented from Mrs. Blakely, the then owner, at an annual charge of  £27.  On the 27th November 1890, Sabina Park was purchased for £750. 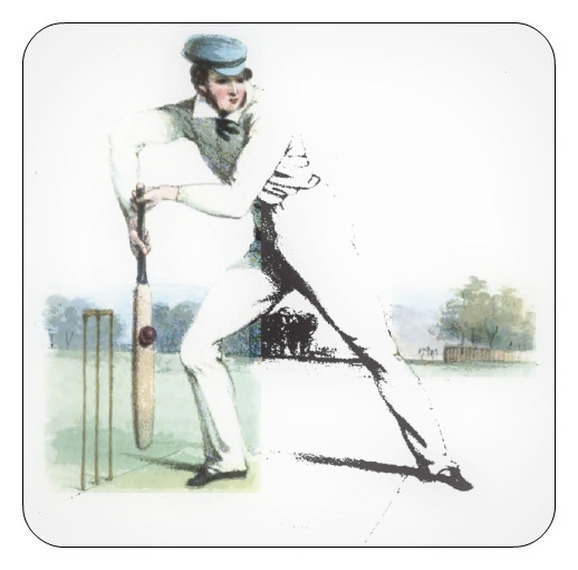 Illustration from Felix on the Bat, published in 1845.

Even nearly two decades after its founding the Kingston Cricket Club seems to have been continuing to attempt to find its place as a cricketing institution. 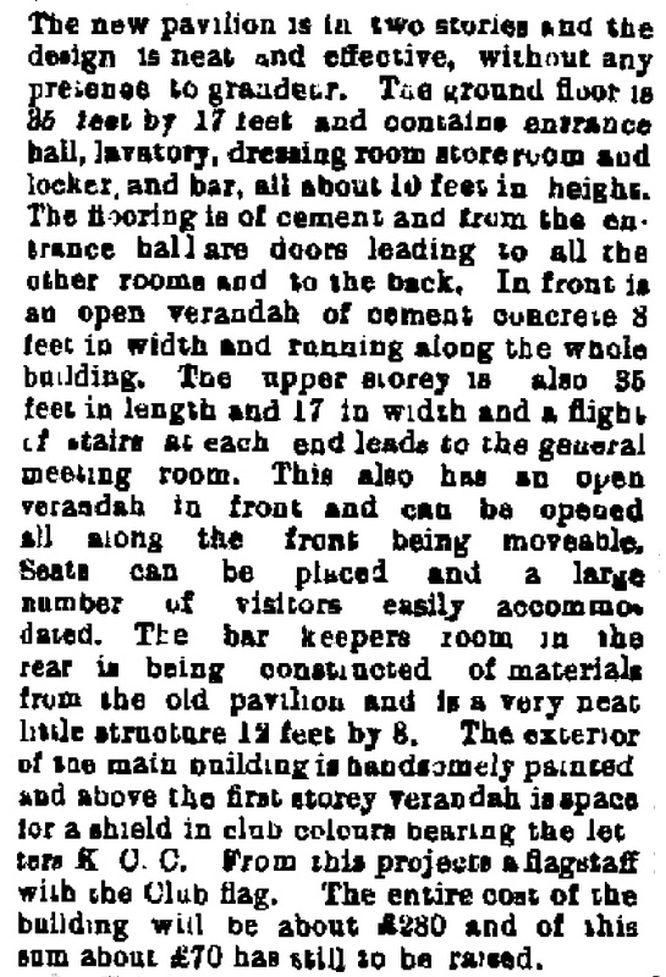 ​       In 2007 Arnold Bertram in a piece in the ​Gleaner on the 110th anniversary of the Senior Cup made some comments on the early years of the Kingston Cricket Club:
I think, however, that this extract gives a somewhat misleading impression of the status of the Club in its early years. There are some minor inaccuracies - the Collegiate School was located on Church Street in 1863, and the Club did not actually 'acquire' Sabina Park in 1880, apparently renting the property until purchasing  it around 1890.  Eyre became Governor in 1864, but was presumably asked, as Lieutenant-Governor, to be patron, out of courtesy; the young men who started the club in January 1863 could hardly have foreseen the events that would occur two and a half years later in Morant Bay. In 1863 Eyre was in fact decidedly unpopular with a wide cross-section of Jamaicans who had found a whole range of reasons for disliking him.
And they were 'young' men, most in their early twenties, a few years out of school, some Collegiate alumni. If employed they seem to have been mostly at the very beginning of careers in the civil service, none of  them achieving the posts Bertram assigns them until decades later. Whatever the status the KCC had achieved by the later 1890s, in its beginnings it was a struggling organisation composed of a group of  young  'middle class' White guys playing cricket wherever they could find a space to play and someone to play against. In the early stages the club clearly had difficulty surviving, far from being a pillar of the establishment.
There are references in various sources to the KCC absorbing the Collegiate CC either in 1868 or 1881, but I am not clear what this actually involved. It presumably meant that many Collegiate old boys played at the KCC rather than forming their own club. The school certainly continued to field a school team, known as the Collegiate CC, until the school closed in 1902. Whether it is true to say that the school  'produced most of Jamaica's cricketers in the 19th century' is something I would have to research in much greater detail than I have so far had time to do!
If the Collegiate School really played such a significant role in the history of Jamaican cricket, it's about time more was known of this famous but forgotten educational institution!