Dr. Beckford, a native of Jamaica, is a graduate of the Royal Academy of Music (R.A.M.), London, England, where he studied on a major competitive piano scholarship from the Associated Board of the Royal Schools of Music. He graduated from the R.A.M. with an honors degree and a double major in piano and organ and was the recipient of many prizes and honors. He holds graduate degrees from the University of Southern Mississippi (M.M.) and the Louisiana State University (D.M.A.). While a student at the R.A.M., Dr Beckford studied organ with David Sanger, former Chair of the Organ Department, and was for four years, Assistant Choirmaster and Organist to Professor Sanger. Dr. Beckford continued his education in the United States in the studio of Dr. Herndon Spillman, Professor and Coordinator of Organ Studies at the Louisiana State University College of Music and Dramatic Arts. At L.S.U. he was elected to the Pi Kappa Lambda honors society. Dr. Beckford gives many concerts as an Organ recitalist and also as an accompanist throughout Britain, and the U.S.A. He has served as an advisor to different Arts Councils and currently serves on the Board of Directors of the Louisiana Sinfonietta.
Dr. Beckford is now Associate Professor of Music and Chair of the Department of Visual and Performing Arts at South Carolina State University; he previously served at the Southern University, Baton Rouge, as Director of Choral Activities, University Organist and Carilloneer, Accompanist and Music Professor. Among the highlights of his tenure at Southern University was the first place prize won by the choir in the
15th Annual "Winner of Winners" Competition of the Festival of American Negro Spirituals in Cincinnati, Ohio, 1996.
His choral experiences include serving as Conductor of the British Broadcasting
Corporation's television programme "Songs of Praise" in December 1997; Interim Director of the Diocesan Festival Choir, Kingston; Director of the Bromley Boy Singers, London, England, Director of the Southern University Concert Choir, and director of several church choirs of diverse denominations. He is currently Organist and Choirmaster of the Episcopal Church of the Redeemer, Orangeburg, and also a Baton Rouge Arts Ambassador.
[written a decade ago] 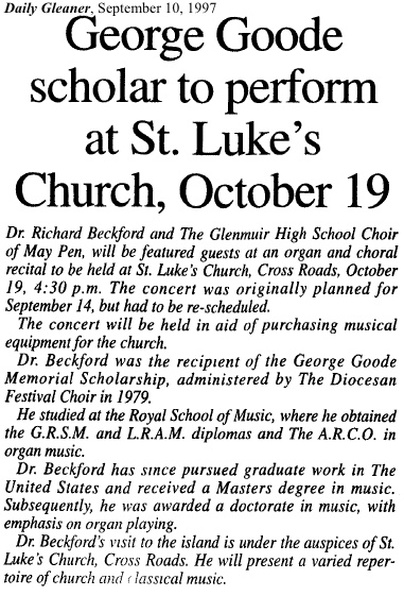