Daily Gleaner, March 15, 1879
The new launch "City of Kingston" has had several trial trips, and her machinery is found to be in excellent working order. She will leave the market wharf, at 8 o'clock, on Sunday morning, with a select party on board, who will spend the day at New Brighton. It is expected that her official trial trip will take place early next week.

Daily Gleaner, March 18, 1879
The steam-launch City of Kingston will proceed on her trial trip at 4 o'clock this evening, for which occasion the invitations sent out for the trial trip, which was attempted on the 6th instant, and which failed through defect in the machinery, hold good.

Daily Gleaner, March 19, 1879
The launch "City of Kingston" started on her trial trip at 4 o'clock yesterday afternoon, from the Victoria Market Wharf. Very few gentlemen accompanied Mr. Walker, the constructor, in consequence, we presume, of the heavy sea-breeze which was blowing at the time. Just as she was about to start, in reversing her engines, she went ashore, and were it not for the timely assistance of the admiralty launch "Rainbow," which was just about to start, and which towed her off, she would probably have capsized.
New Brighton was an alternative name for what has for a long time been known as Port Henderson; the identity of the 'Aboukriville Hotel' is totally elusive, as there seem to be no other references to it!! 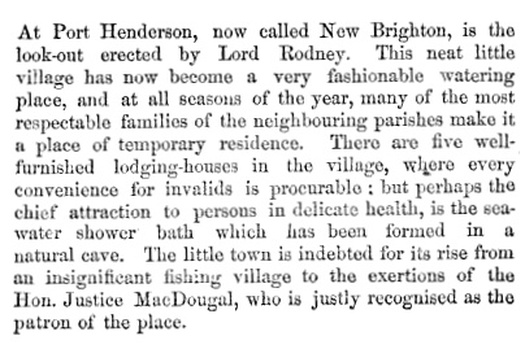 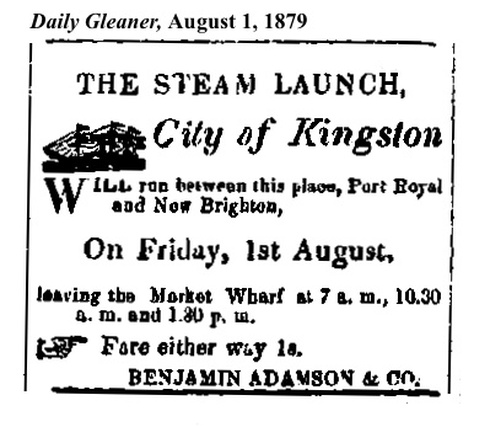 On August 18th 1880 Jamaica was hit by a serious hurricane, and Kingston and the harbour were badly damaged; the West End Foundry lost part of its roof, and the City of Kingston, like numerous other vessels, sank in the harbour.
Daily Gleaner, October 5, 1880
The steam launch "City of Kingston" which sank in the harbour during the storm of the 18th of August, has been raised by Capt. Williams, the diver, with the assistance of the schr. "Minis." She has been pumped out and will be ready for work in a short time. 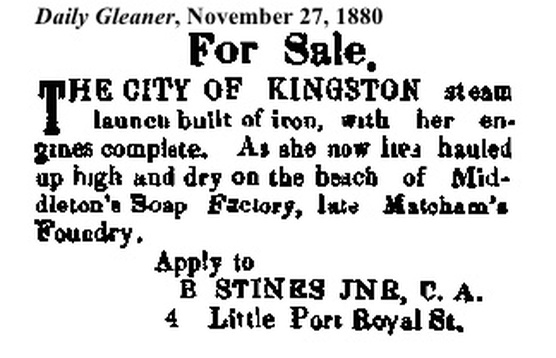 . . . and, so far, nothing further on the fate of the City of Kingston, which may just have been salvaged.