The young Forsyth left the island in 1911 to continue his education first at the Tuskegee Institute and later at the Universities of Illinois and Toledo in the United States, where he graduated with the degree of Batchelor of Science. A year later he began the study of medicine at McGill University in Canada, graduating in 1930 with the degrees of Doctor of Medicine and Doctor of Surgery.

Dr. Forsyth started his medical practice in Atlantic City where he met C. Alfred “Chief” Anderson in 1932, soon after Anderson had received his Commercial and Air-transport Pilot License, the first Black American to do so. The two became close friends, and Forsyth soon received his Private Pilot License. In July 1933, Anderson and Forsyth completed a flight from Atlantic City to Los Angeles and back. Their Fairchild 24, ’The Pride of Atlantic City’, had no parachutes, landing lights, radio, or "blind" flying instruments, and much of their navigation was accomplished using a road map. This was the first such trans-continental flight by Black aviators.

In 1934 the two pilots planned a ‘Goodwill Tour’ of the Caribbean and South America, the first Black pilots to undertake such a flight. After extensive planning and with financial and moral support from Black Americans, the two set off from Atlantic City in the plane they had named ‘Booker T. Washington’ in the early morning of November 8. After touching down twice in the USA, they reach Nassau, their first Caribbean destination, in the late afternoon of November 9. They received an enthusiastic reception, then flew on to Cuba, and then to Jamaica, where again there was a great reception. The rest of the tour took them to Haiti, the Dominican Republic, Puerto Rico and down through the Lesser Antilles, to Grenada. In spite of some problems their tour had gone well, but when they flew into Trinidad, their luck ran out; after another enthusiastic welcome, they prepared to fly on to British Guiana, but immediately after take-off the ‘Booker T. Washington’ crashed in someone’s backyard. They flew on to Georgetown in a Pan-Am flying boat to fulfill their commitments there, but the tour was over and they returned to the USA by sea at the end of December. They had visited 10 of the 25 countries they had hoped to visit, covering a quarter of the distance they had hoped to fly. In spite of its premature end, the successes of the tour had been spectacular, involving several aviation firsts in the Caribbean. 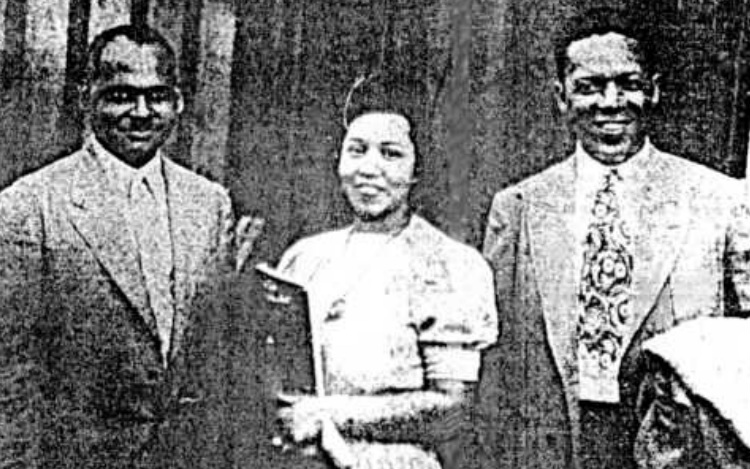 Dr Forsyth with Gertrude and Alfred Anderson, on holiday in Jamaica, December 1937.
After this Dr Forsyth gave up flying, but Al ‘Chief’ Anderson went on to a great career as a flying instructor, especially to the ‘Tuskegee Airmen’.

Dr Forsyth practiced medicine in New Jersey until 1978, was active in the Civil Rights movement, and died in 1986, having lived to see increasing recognition of their aviation achievements.