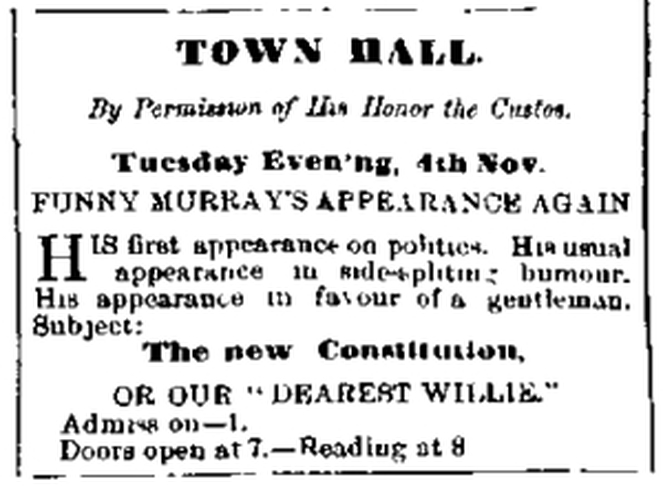 'With Henry Garland Murray and his two sons,Andrew C. Murray and William Coleman Murray we come to a most important development in the history of oral recital in Jamaica.'  Errol Hill
- the Murrays wrote their own material, and their stories were Jamaican.
In his invaluable book The Jamaican Stage, 1655-1900, the late Errol Hill wrote of H. G. Murray's first "Reading", based on material in the Colonial Standard for January 11, 1869:
page 205
'The elder Murray had been writing a book of these character sketches and had completed four chapters when he was encouraged to offer his first readings at Wolmer's Girls' schoolroom in the city on January 27, 1869. His presentation covered the following topics:"Crop-over rejoicings; Sketches of the Walkfoot Buckra; the Sets; John Canoes; Actor Boys; Fishermen; Bakerboys; Bugaboos, etc.," with songs of the period.'
Daily Gleaner, January 27, 1869 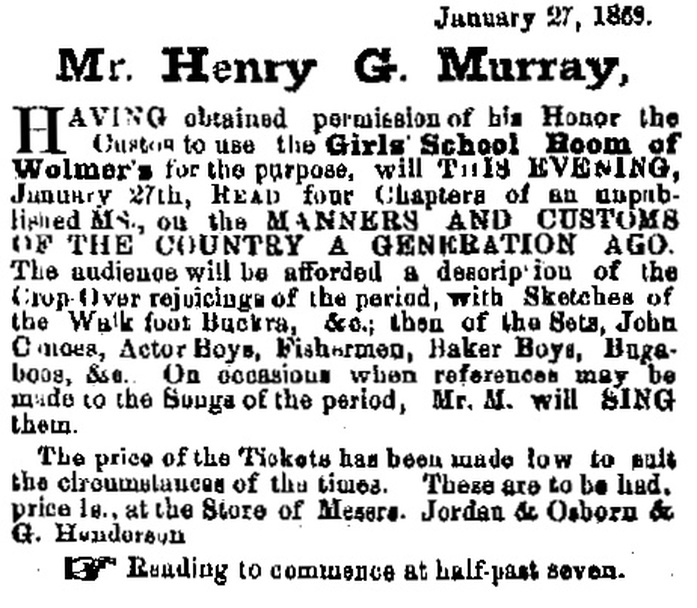 The paragraph above makes clear the ethnicity of H. G. Murray and his sons; although Errol Hill had deduced that they were Black, in the terms of their time, they were Coloured men - of mixed Black/White ancestry.

I wrote this account of the Murrays ten years ago:

﻿The first Jamaican entertainers of African ancestry who can be identified by name are the three members of the Murray family who kept Jamaica laughing for nearly four decades from 1869 to 1905. Henry Garland Murray, the father, and two sons, Andrew and William, made Jamaican dialect presentations popular among all classes of the island’s people. Although Henry and William were involved in newspaper ventures, especially in western Jamaica where the family came from, it was their dialect performances that made the three instantly recognizable. In the 1880s the term ‘Funny Murray’ was coined, and it was by this name that William, the last of the three, was known through the 1890s and until his death in 1905.

When H G Murray began what he called ‘readings’ or ‘lectures’ in 1869, he intended to present flashbacks to the life of an earlier era – ‘Manners and Customs of Jamaica in the Olden Times’ was the title of his first piece. ‘Brown Sammy in search of a wife’ and ‘Brown Sammy finds a wife and finds trouble’ are examples of the more intriguing titles of later presentations. Murray toured the island with his ‘readings’, and even attempted to take them abroad to America and Panama, but found little success away from home. He maintained a vigorous programme, appearing at church, lodge and educational functions; he also made serious contributions, from Shakespeare, and a lecture on the life of Edward Jordon. It was his humourous lectures, though, which had his audience ‘with tears of laughter rolling down their cheeks’ and brought hundreds to hear him.

He seems to have suffered from poor health through this period of his life and a trip to Colon in late 1876 brought on his final illness. When he died on January 28, 1877, the Gleaner editorial claimed ‘As a writer and reader of the Jamaica Creole dialect, he had no superior. He knew it thoroughly, and could pronounce it, even to its minutest shades of inflection’. Although several of his readings were published, only one has survived - ‘Tom Kittle’s Wake’ which was based on his earliest work.

In the years after his father’s death Andrew took on his mantle with pieces such as ‘The Census of 1881, or Wey da dickens backra da count we fa?’ Andrew Murray seems to have had successful tours in the eastern Caribbean and the Bahamas, and when he disappears from the Jamaican scene later in the 1880s, it is possible he went to live elsewhere, since no reference seems to be made to his death.

William Collman Murray was the ‘Funny Murray’ remembered by later generations, into the second half of the 20th century. He developed further his brother’s use of current events as the basis of his presentations, with titles such as ‘Ah Whey Mass Philip Dey?’ on the politician Phillip Stern and ‘Hole de light, rock stone da come’ on the Montego Bay riots of 1902. But he also did more general humourous topics such as ‘when puss no day ratta tek house’, ‘Miss Lena Christmas pudden’ and ‘Mass William from ober riber.’

He took his performances around the island and to functions of all types, producing such a devastating reaction that the rector of the Kingston Parish Church was said to be alarmed for the safety of the roof of the parish hall on account of the laughter that Mr. Murray would cause. He died in March 1905 with the tradition of Jamaican dialect performance securely established, to be carried forward over the years by Cupes and Abes, Mass Ranny and Miss Lou, and Oliver Samuels.
legacy  >
Dr R. O. Murray >