W Ralph Hall Caine:
'Mr. Douce has enlisted the esteem of the white without forfeiting the confidence of the black, and his admitted success is one of the facts with which we have to reckon .... His success is indisputable.' 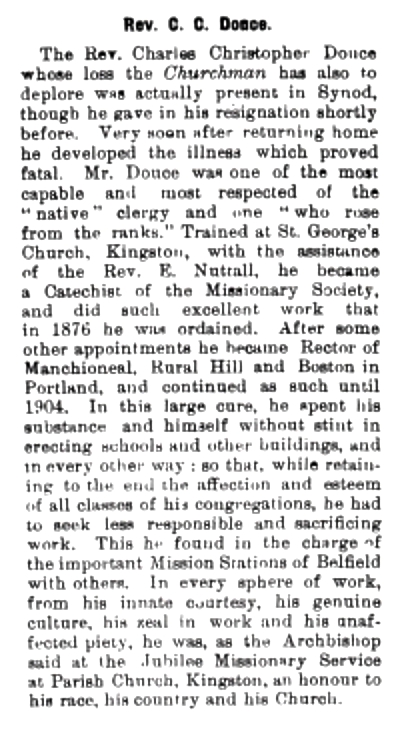 Falmouth Post, Friday, September 4, 1874
A NEW CHURCH
The foundation stone of the new Chapel at Gibraltar, in the neighborhood of Stewart Town, in the Parish of St. Ann, was laid on 6th August.  It is in connection with St. Thomas church in Stewart Town.  The stone was laid by Mrs. Johnstone of Stewart Town (widow of the late Dr. Johnstone), and the following gentlemen spoke:  The Revd. F. L. King, Curate of Brown's Town; Mr. C. C. Douce, Catechist and Lay Reader at Albert Town, and Mr. J. Lothian, member of the Church Committee for the district.

In 1876 the catechist and lay reader from Albert Town, along with two others, became a candidate for ordination as a deacon in the Church of England without the expectation of later being ordained to the priesthood. 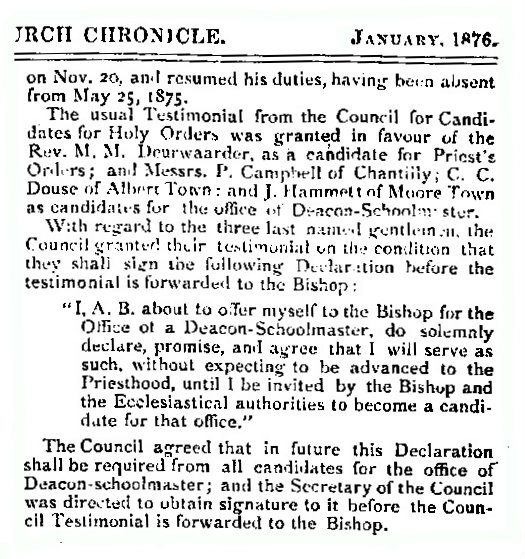 At the end of 1880 the deacon at Albert Town left the cure where he had served so well in order to be ordained to the priesthood by the newly chosen Bishop of Jamaica, Enos Nuttall. 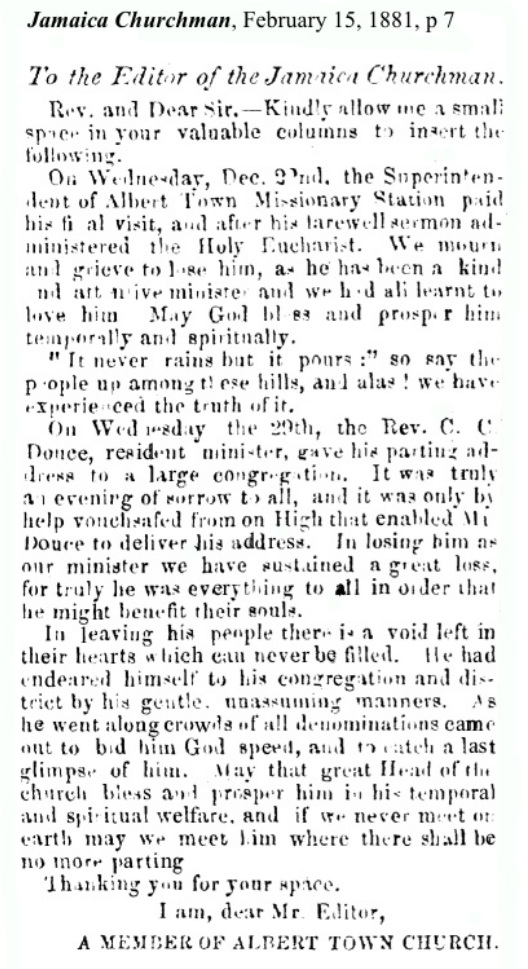 Reports in the Daily Gleaner and the Jamaica Churchman in March 1881 make it clear that in the very first ordination of his episcopate Bishop Nuttall ordained two Black men - C L Barnes and C C Douce - to the priesthood, although no mentioned is made of the colour of any of those ordained.
(The Gleaner misspelt 'Douce' as 'Dowce'; a more common misspelling was 'Douse'.)
Jamaica Post 1893 April 18 p5 col 1
St Andrew Parish Church: The sermon on Sunday morning at the St Andrew Parish Church was preached by the Right Revd. Enos Nuttall, D.D., Bishop of Jamaica, and the lessons were read at both the morning and evening services by the Rev C. C. Douse [sic], Rector of Manchioneal. Mr. Douse is a black gentleman of education and culture, and his impressive reading of the beautiful service of the Church of England was much admired by the congregation.
Jamaica Churchman 1900 February 2 p4 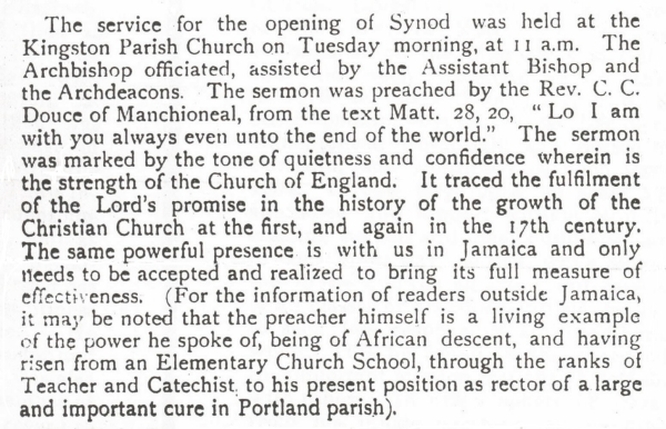 References to the career of the Rev C C Douce can be found in the Daily Gleaner -
Daily Gleaner, February 7, 1912
Archbishop Nuttall at the 1912 Church of England Synod:
'The Rev. Charles Christopher Douce attended our Synod a year ago for the last time. He was one of the most useful and most respected of the Jamaica born clergy, and one who rose from the ranks. Trained chiefly at St. George's Church, Kingston, he became a Catechist of the Missionary Society, and did such excellent work that in 1876 after some further special training, he was ordained as Deacon and afterwards as Priest, following on other more temporary appointments, he eventually became Rector of Manchioneal, Rural Hill, and Boston in Portland, and continued as such until 1904 when he look charge of the important Mission Station of Belfield with others. In each sphere of work, by his innate courtesy, his genuine culture, his zeal in work, and his unaffected piety, he proved an honour to his race, his country and his Church. He died on 16th May, 1911, at the Parsonage, Belfield, at the age of 65.'