Daily Gleaner, April 19, 1899
The Story of the Electric Tramway
A COMPLETE ACCOUNT OF THE WORK FROM
START TO FINISH.
ONE OF THE FINEST SYSTEMS IN THE WORLD.
The electric cars are now a familiar object of the Kingston Streets, and it is already hard to realize how we did without them during the interregnum so prolific of profit to the 'busmen. The general public recognizes fully the excellence of the system and loudly praises the Company's work. But how good that work is, only experts can properly understand. Mr. Holgate, Mr. Brothers, Mr. Cooper, and their well-chosen assistants have deserved, and are receiving, the highest encomiums of the leading men in the engineering and electrical professions. This article is written with the object of enabling the public to realize the greatness of the work from the engineering standpoint, and to endorse the professional verdict.
THE STARTING OF THE WORK.
The license for a system of electrical trolley tramways in Kingston was granted to the West India Electric Company on March 10th, 1898. The Company did not waste much time, for they started upon the business of construction on May 2nd. beginning with the erection of poles to carry the trolley wires. On June 23rd track-laying was commenced on the Constant Spring line.
It was the original intention of the promoters to work the line by electrical power generated by steam. But it was suggested that possibly water power could be used as the prime motor, and Mr Holgate was sent down to Jamaica in January, 1898, to inquire into the feasibility of this. Shortly after his arrival, he was joined by a Mr. N. L. Cooper, the well-known hydraulic expert, and together they investigated the water power phase of the question. They were materially assisted by Mr. Valentine Bell (the Director of Public Works.) After exhausting all the available information on the subject they decided to recommend the use of the waters of the Rio Cobre for the development of the necessary power.
HARNESSING THE RIO COBRE.
Property rights were at once secured, and work upon the plans commenced. It is conceded upon all hands that whenever water power can be obtained at a reasonable capital outlay, it is superior to steam power, inasmuch as its greater reliability and consistency give it a decided advantage, while from a financial point of view it goes without saying that its advantages over steam are very great, especially in a country situated like Jamaica, where the cost of importing coal is a most serious consideration.
The question of the hydraulic development was by no means a simple one. In ordinary cases of this kind, the dam is built with probably a short head race and a power house situated close to the dam. This description would apply to ninety-nine out of every hundred applications of water-power. But in the valley of the Rio Cobre, though there is a succession of rapids, there is no place where a dam of this character could be built, to be of commercial utility, without raising the water to such a height as would flood enormous districts of cultivated land and render the highways at times impassable. To overcome this difficulty a scheme was evolved by which the available fall of the river was utilised without in any way interfering with private or public property.
The dam has been built across the river immediately opposite the mouth of the long tunnel on the Railway near Bog Walk station. For such an immense development of power, this dam seems very insignificant. It is only nine feet high but it can, if necessary, be raised three feet higher by the placing of flash boards between steel posts built in the concrete dam for the purpose. On the left bank of the river, at the dam, a "skimming basin" has been formed, into which the waters of the river pour, entering thence into the steel conduit on their way to the power house.
THE LARGEST PIPE IN THE WORLD. 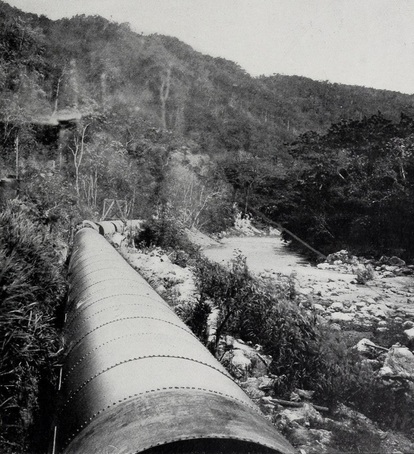 along the pipe line
This steel conduit, or pipe, forms the head race for the power house. It is ten feet in diameter at the dam and its entrance is protected by a double screen which effectually prevents the entrance of weeds and debris with the water. The distance from the dam to the power house is 6,200, feet and along the whole of the distance extends this huge pipe eight feet in diameter. It is entirely built of steel and for the greater part of its length if embedded in rock or compact earth, well protected from the river even in its highest stage during the May and October floods. At places the pipe is supported on concrete piers, and every possible precaution has been taken to make it of the most substantial construction.
It is the largest pipe in the world—probably the only thing in Jamaica which can claim such a proud supremacy. It weighs 1,742,894 lbs. of solid steel, held together by 252,102 rivets. Such colossal figures may give one a good idea of the huge labour involved in its construction. 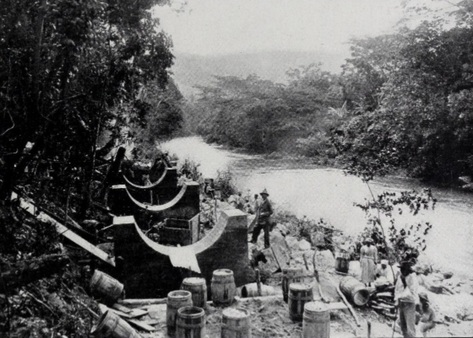 concrete piers carrying the pipe line
A TRIUMPH OF NATIVE LABOUR.
Only one white man was actually engaged in the construction of this pipe - Mr. Martin Peppard. The pipe arrived in Jamaica in the shape of curved plates, was transported to Bog Walk by railway, and taken to the site by teams. The plates were assembled, placed in position, erected, and rivetted entirely by native workmen, under the supervision of Mr. Peppard, a man of much experience in this kind of work. We have his own statement that the native workmen learned the work as quickly and did it as satisfactorily as any workmen he has ever handled on similar construction in any country. It has been found throughout the whole of the construction of this tramway system that the native labourer, under good, strict, intelligent supervision, is an excellent man, who well repays any initial trouble in the way of instruction or disciplining, The too prevalent idea that he cannot be trained to do good work must be considered as exploded. The West India Electric Company has paid its laborers well, worked them hard, and got good service out of them.
THE POWER HOUSE. 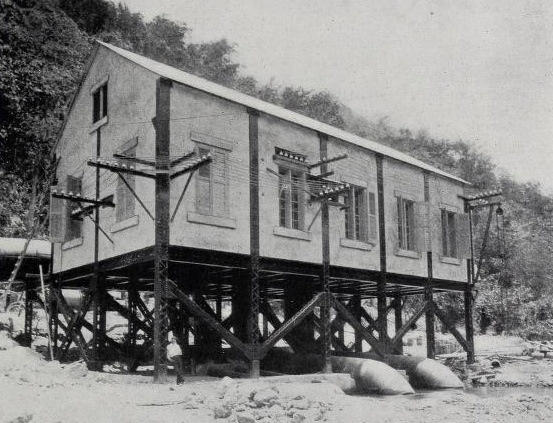 To resume our description of the power plant. The power house itself, situated on the left bank of the river, is built entirely of steel and concrete, with foundations carried fifteen feet below the bottom of the river to a bed of solid rock. This was rightly deemed necessary, for as the building would have to be erected high above the level of the river and would contain rapidly moving machinery, the more solid the foundations the more satisfactory would be the result. The building is only 70 feet long and 36 feet wide, but an idea of its substantial construction may be gathered from the fact that it contains no less than 270,000 lbs. of steel. The very best methods known to science were adopted to ensure its absolute stability. The floor of the building is about eight feet above the highest recorded level of the river at the spot, and every precaution has been taken to ensure safety from any sudden rise of the river, however violent it may be.
Throughout the whole of the construction of these hydraulic works, the aim has
been to secure stability. All sorts of conditions have been anticipated, and all that foresight and experience can suggest has been done to obtain permanent!y
satisfactory results. 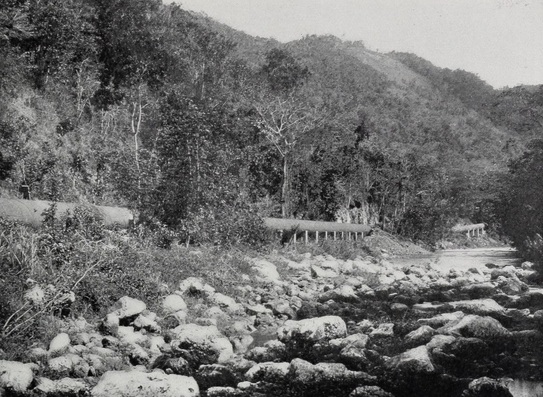 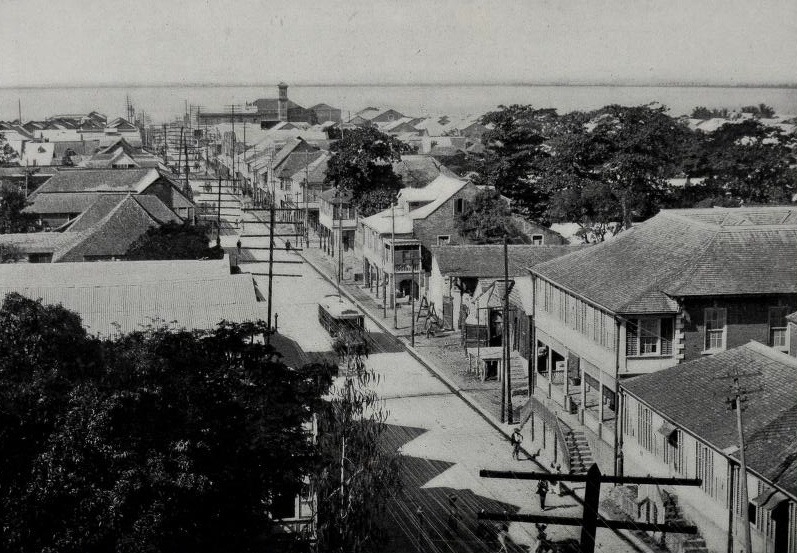 a tram car on King Street
THE COMPANY'S FUTURE PROGRAMME.
The system as set out in the license granted to the Company will represent the completion of the contemplated operations. No scheme of future extensions has yet been considered, and questions of this kind will of course only be considered when the demands are sufficiently strong. However, it is understood that the Company has in contemplation the construction of a line along South Camp Road at an early date. Surveys have already been made.
As regards the Rock Fort line, the Company's idea is that the tramway has been extended as far in that direction as their own interests and the public demands justify. But of course they are in the hands of the Government, and will construct the line to the stipulated point if the Government demands. The company feel, however, that under present conditions the line cannot be remunerative, and cannot be of so much service to the public as a new line, given elsewhere in the city in exchange, would be.
Throughout the negotiations between the Company and the authorities--whether
those of the municipality or of the central Government— the object always aimed at by both parties has been to meet the needs of the public. The alterations made from time to time from the terms of the license have always been suggested with this end in view. The Company have throughout prosecuted their work in the most liberal spirit. Expense has not been spared where expense was necessary, with the result that today we see the practical completion of an admirably constructed and useful system of tramways.
THE COMPANY'S STAFF.
The Company have had more difficulty with regard to the staff employed in working the cars than with any other branch of their employees. The position of conductor on a car is one requiring a long training, and it is difficult to obtain men who combine the necessary qualities of neatness, quickness, gentlemanly behaviour, and accuracy. The public will agree that the company have done exceedingly well in this matter, and will be content to make allowances for any little initial imperfections on the part of the conductors.
To the Company, we most cordially wish abundant success, believing that their interests are bound up with the interests of the people of Jamaica.
[The illustrations in the article above come from an article by H. Holgate in Cassier's Magazine: Engineering Illustrated, volume 17, 1899-1900.] 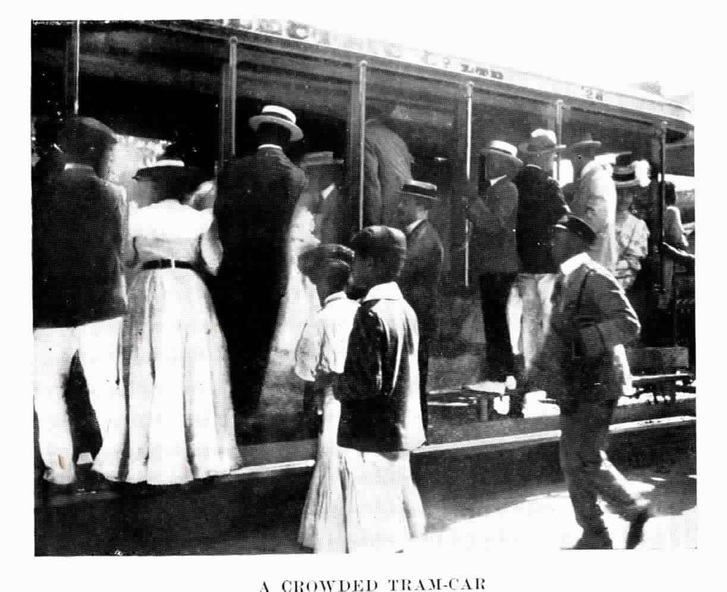